Granted, even with a Core i7 processor, no computer user using a hard drive would be performing all of these tasks concurrently unless they wish to see their computer go unresponsive for up to 30 minutes at a time, but with an SSD this is almost child’s play. For a good quality SSD, the above isn’t even enough to make the system crawl or go unresponsive. Playing a game with an anti-virus scan in the background without losing FPS is very possible. So if this sort of system abuse, or “multitasking” sounds vaguely like your daily routine when you sit down at the PC, then the results may be of interest. 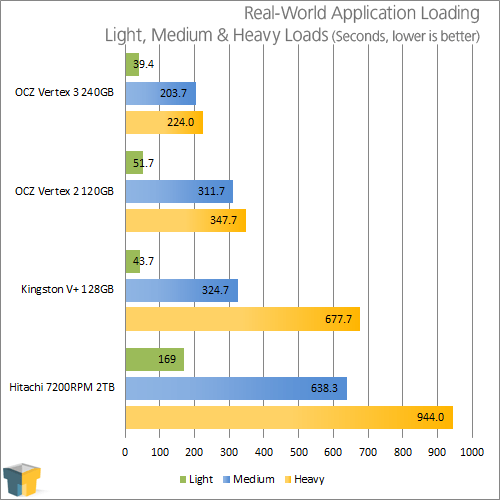 So, a few walls of text and a single graph later, what do we have? Well from the press of the power button to the very last image loading in Photoshop CS5, the entire system boot and Light batch test completes in an average of 39.4 seconds with the OCZ Vertex 3. Since most computers can’t even load Windows 7 in that time-frame, that should say something. A traditional hard drive requires almost three minutes completing the same test the Vertex 3 can finish in less than forty seconds, system boot time included.

The medium batch test is where the real stress begins for these drives. As we continue to re-add drives to our new test system, the full spread of SSD results will again become apparent, but it is pretty clear the Vertex 3 brings more muscle to the table than even its own predecessor. OCZ’s Vertex 3 completed the entire workload in slightly under an impressive three and-a-half minutes. The nearest SSD, the V2, required an additional 108 seconds or 1:52 to complete. To keep things in perspective a large capacity, the modern mechanical drive mustered up nine minutes for the same task.

Things get really interesting with the heavy batch test. Results are directly comparable to the medium test here, as the only change was the addition of the anti-virus scan. Raw sequential performance won’t win this benchmark. Those controllers with high queue depths to handle the multitasking load will shine here, and will quickly separate the men from the boys.

Although it was clear the Vertex 3 was going to win, it was disconcerting to see an anti-virus scan only add an average of 20 seconds to the task time. To try and put this into perspective, a full scan of a 5GB folder containing 19,748 program files only required an additional 20 seconds to perform concurrently while the medium batch test was running. That same task more than doubled the time required for the Toshiba-based SSD to complete the entire test, and an additional five minutes to the hard drive time which ended up taking over 15 minutes to finish.

The Vertex 3’s predecessor finally shows its true strength here as well, but even the Vertex 2 required an extra two minutes here. The Vertex 3 was simply able to finish in 2/3rds the time of the V2. These tests throw everything except a photo of the kitchen sink at these drives, and stress every possible aspect of the SSD controller. Queue depth for multitasking, random reads and lots of small random writes, and even some sequential reads and writes, but the Vertex 3 doesn’t seem to have any weaknesses regardless of workload, even despite the huge jump in sequential read and write performance this drive brings to the table.