I will just say OCZ has simply done it again. The OCZ Vertex 3 lives up to its heritage and delivers another leap forward in performance. Sequential write speeds alone can be more than double that of its predecessor, and 4KB random write IOPS have improved similarly too. Thanks in part to the Vertex 3’s SATA 6Gb/s interface, the second generation SandForce controller has no trouble dominating the competition.

We would do a disservice to not point out that competing drives such as the Crucial m4 and Intel 320 Series were not compared here. But the simple truth is even if they were, the Vertex 3 offers significantly higher sequential and random write throughput than the Intel 320 Series. On the flipside against the m4 SSD, the Vertex 3 offers significantly higher random IOPS performance. And before anyone mentions I left out the Intel 510 Series, it is worth pointing out that they utilize a similar Marvell controller to that found in the m4 SSDs and as such include the same performance issues as the m4 series.

There simply isn’t a competitor on the market right now that can take on the this drive in terms of performance; the Vertex 3 is simply the drive to have, assuming one has a SATA 6Gb/s port to pair it with.

That leaves just price. At slightly over $2 per GB, the price is still too high for widespread adoption, but even then the V3 SSD is priced the same as the closest thing the Vertex 3 has to any competition, including the Intel 320 Series. The Intel 320 Series is a good drive with a reputation for endurance, but from a performance standpoint it is outgunned unless you are stuck with using a SATA 3Gb/s interface. If a SATA 6Gb/s port is available then there is little reason to choose anything other than the Vertex 3. 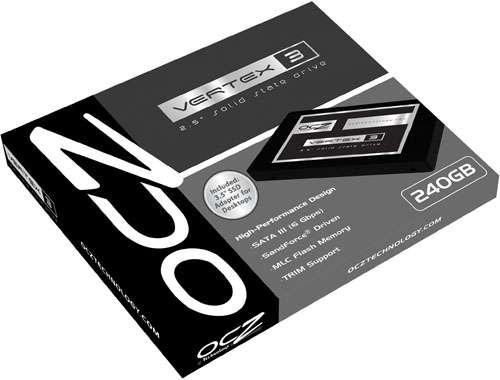 I’d like to note that the original Vertex SSD received our Editor’s Choice award and as such it was the drive to have for my personal PC. After a year of rigorous service I have had no complaints and was forever sold on solid-state drives since. I can sit down at a PC and quickly tell simply by use if it has an SSD or not; the difference in responsiveness alone is tangible. As OCZ’s Vertex 3 will receive our Editor’s Choice award, it is only fitting that I will be upgrading the SSD in my personal rig to one in the near-future.

The question “what makes a good solid-state drive” is a particularly complex one to answer, and not every single facet was directly addressed in this review. On early SSDs stuttering used to be a problem, but better controllers optimized for random IOPs and queue depths >1 emerged to fix that. TRIM support became widespread in order to increase performance and improve NAND longevity. Random 4KB write IOPS is not everything in of itself, but it is a very large portion of the final recipe. The Vertex 3 simply takes all this and wraps it up into one single package. It offers absurdly fast sequential reads and writes, yet still manages even more absurd amounts of random write throughput at any file size.

The OCZ Vertex 3 is, simply put, the current pinnacle in SSD performance.