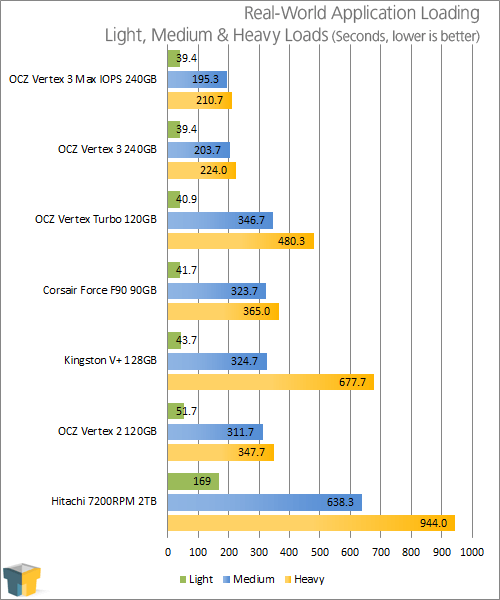 So, a few walls of text and a single graph later, what do we have? Well from the press of the power button to the very last image loading in Photoshop CS5, the entire system boot and Light batch test completes in an average of 39.4 seconds with both the OCZ Vertex 3 and the Vertex 3 Max IOPS. Since most computers can’t even load Windows 7 in that time-frame, that should say something. A traditional hard drive requires almost three minutes completing the same test the Vertex 3 and V3 Max IOPS can finish in less than forty seconds, system boot time included.

The medium batch test is where the real work begins for these SSDs. Still, at just three minutes and 15 seconds the Vertex 3 Max IOPS delivers the quickest time we’ve seen yet, a full eight seconds quicker on average than the V3. The nearest SSD, the V2, required an additional 116 seconds or 1:56 to complete the same workload. To keep things in perspective, a large capacity mechanical drive mustered up nine minutes for the same task.

Things get even more interesting with the heavy batch test. Remember results are directly comparable to the medium batch times as only a background anti-virus scan was added to the workload. For a controller such as the SF-2281 powering the Vertex 3 Max IOPS, such a scenario is perhaps the only test that truly maxes it out, other than perhaps Iometer.

Just like the original V3 results, the Max IOPs required a disconcertingly tiny addition of 15 seconds to complete an anti-virus scan of over 5GB spread across 19,748 program files in the background, while still performing the main tasks. One thing is for sure, there is no longer any excuse for not having anti-virus installed!

There really isn’t an easy way to quantify such stark results. The Vertex 3 Max IOPS completed the heavy batch scenario nearly 40% faster than the nearest competitor in our graphs, the V2. It was a full 13 seconds quicker than the V3, and performed the same task in 20% of the time required by a HDD. If percentages aren’t your thing, then simply consider that the Vertex 3 Max IOPS took three minutes versus the fifteen minutes for a mechanical hard drive. In fact, the V3 or V3 Max IOPS could run the same scenario five times over before the HDD even finished once.