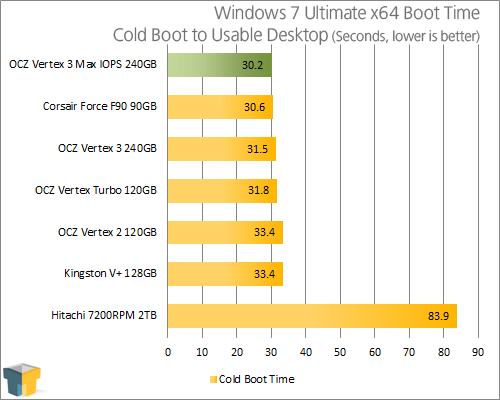 It appears we are well into seeing diminishing results from upgrading our storage as far as boot times are concerned, which means something else is the bottleneck. Users that overclock the Core i7 processors by a significant amount can drop boot times even further, although booting Linux would deliver the same results.

OCZ’s Vertex 3 Max IOPS only manages to edge out the V3 here, but both deliver the best boot times we’ve seen so far. Where they truly shine are warm boots, or restarts where the system was already powered on. Warm boots with the V3 Max IOPs averaged around a mere twenty seconds. 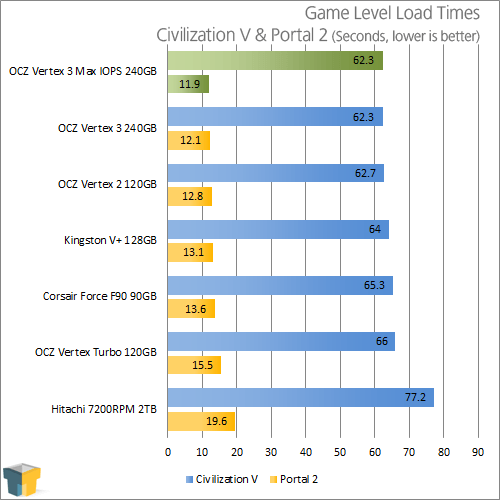 The Max IOPS again just edges out the V3 in Portal 2, and ties it in Civ 5 where the lack of multithreading is the primary bottleneck. The important part to take away from this is if you are considering upgrading from a hard drive you will see some very real gains in performance, but the same can’t be said for most SSDs. The Vertex Turbo provides an interesting look back in time, but even it is much faster than the hard drive here.

The Vertex 3 Max IOPS is 39% faster than the mechanical drive when loading a chapter of Portal 2. Considering how many levels there are in any game, that 39% starts to make a tremendous difference and goes a long ways toward keeping the game experience smooth and immersive. I can personally attest that after getting used to an SSD for gaming, having to switch back to a mechanical drive for any reason is simply painful.