OCZ Technology nor Vertex should need an introduction to any tech enthusiast, but for those readers that might appreciate one, here’s a brief recap. It was 2008 and Intel had just released the first general consumer-targeted X25-M SSD. Performance was exemplary at the time, albeit at nearly $600 for 80GB, it was a drive only a relative few could spring for.

Just a few months later, OCZ, with the help of a new startup called Indilinx, launched the first consumer rival SSD that challenged the X25-M on both price and performance. That SSD was the original Vertex.

Fast forward a few years and quite a lot has transpired since then. The Vertex 2 & 3 models were based off of SandForce controllers, admist a myriad of new competitors and SSD controllers. Then in 2011, OCZ seized an opportunity to jump headfirst into the SSD market by acquiring Indilinx. As one of the tech enthusiasts that fondly remembers the initial debut of solid-state drives, it is almost nostalgic to see the Vertex series again paired up with Indilinx technology in the latest generation Vertex 4 SSDs.

To be fair, the underlying hardware is actually an updated Marvell controller somewhat similar to that found in the older Crucial m4 or Intel 510 Series solid-state drives, however the firmware is purely Indilinx. As anyone that has followed the progression of SSD controllers would probably attest, the firmware can be even more important than the underlying hardware it is running on. 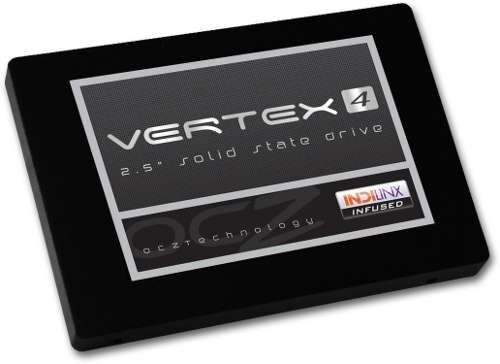 OCZ’s Vertex 4 is the latest challenger to the top SSD performers, and as such, will require a SATA III (6Gb/s) port to deliver its full potential. The 256GB model we are testing offers up to 510MB/s writes and 560MB/s reads with an eye-popping 90,000 & 85,000 read/write IOPS, respectively. These happen to be the highest IOPS ratings we’ve seen advertised for any SSD.

One advantage out of the gate for the Vertex 4 (and one that OCZ is quick to point out) is that performance no longer depends on the type of data being written. SandForce controllers achieve best performance by compressing all data that passes from the system to the flash NAND and will lose some of that performance if it’s already compressed data (such as JPEGs, zipped files, or most video types) that’s being written.

Briefly diving into the technical stuff, the original Everest controller was found on OCZ’s Octane and Petrol SSDs. The Vertex 4 is powered by the “Indilinx Everest 2” controller platform and utilizes Synchronous MLC NAND. OCZ touts that bottlenecks in the original Everest have been removed and the final clockspeed of the controller itself has been raised to 400MHz. The standard AES256 encryption is included, but what most readers will likely be most interested to hear about is the new 5-year warranty the Vertex 4 offers.

Perhaps the most telling detail on the spec sheet, OCZ has listened to consumers and adopted a full five year warranty on the Vertex 4, unlike its predecessor which just had three. This is actually thanks in most part to Indilinx’s Ndurance 2.0 technology, which basically manages flash writes, garbage collection, and most importantly minimizes write amplification. Another trick of Ndurance to ensure the longevity of the drive includes optimizing write voltages for each individual NAND used in order to minimize the necessary voltage required for writes. This in turn will extend the lifespan of the NAND just a bit more because (just like CPU silicon) not all NAND are created equal. The higher the voltage utilized during the writes the more destructive the wearing process will be.

Hardly any hard drives will offer a five year warranty anymore, so to have a five year warranty on a solid-state drive is a refreshing change and should only add value to the more expensive drives as well as showcasing OCZ’s confidence in its latest in-house creations, the Vertex 4 and Agility 4.

The retail kit is by now pretty standard fare, a 2.5″ to 3.5″ metal plate adapter, mounting screws, and a case sticker to show off that powerful yet hidden SSD upgrade lurking inside. OCZ also offers its SSD Toolbox software suite available as part of its SSD-specific firmware download package. The Toolbox will allow users to pull SMART data directly from the controller, check firmware versions, and even offers a tool for secure erasing the SSD.