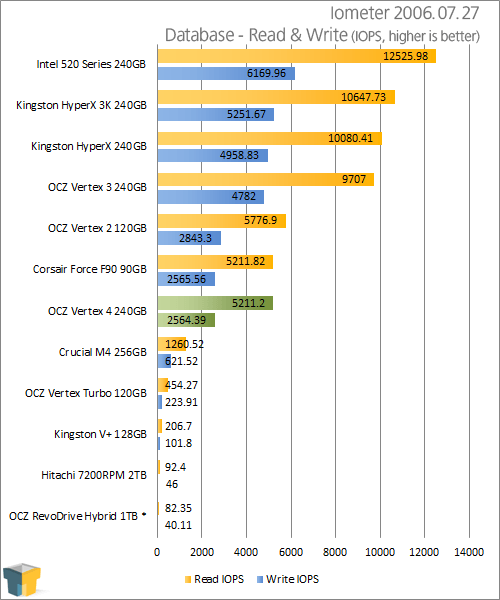 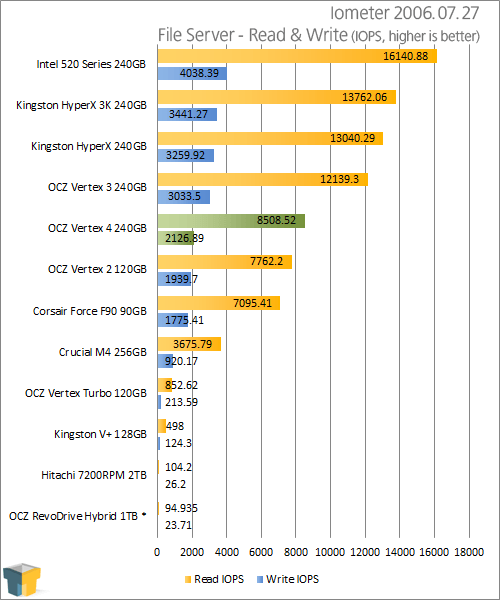 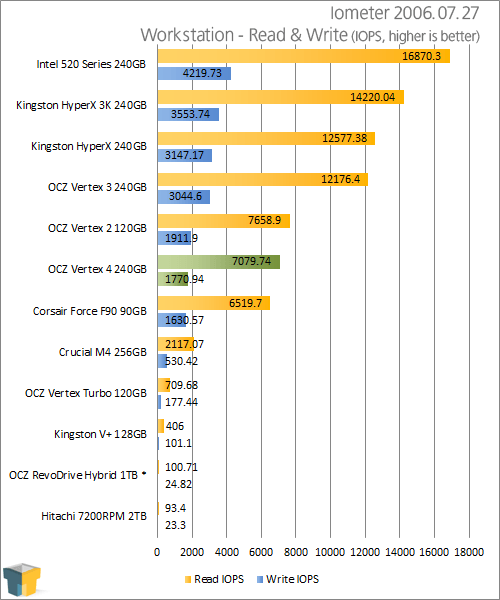 Iometer may be a hard program for users to translate into real world performance, but it is one of the few programs that can truly stress the latest models of SSDs now available and illustrate the differences between them, let alone show what they are truly capable of. Any SSD that does well here is capable of the toughest load conditions found in server racks, so suffice to say it can withstand any usage scenario a desktop user might throw at it.

This test turns out to be extremely informative. For those astute readers wondering what the real difference was between an m4 and the V4, this test showcases that completely. IOPS performance baby! Results range from a doubling the read and write IOPS of the m4 at the low end, all the way up to almost four times the read/write IOPS performance in the workstation scenario. The Vertex 4 may share a similar genealogy to the m4, but that’s it. This clearly illustrates why the firmware package can be even more important than the controller hardware itself, and the Indilinx firmware package is definitely the better performer here. It isn’t the best results we have seen, but just to keep perspective, check out the traditional hard disk performance for a suitable reference point. 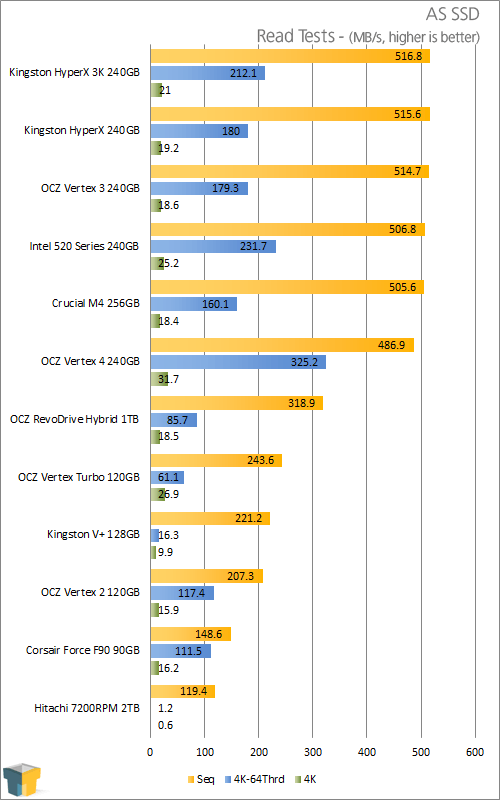 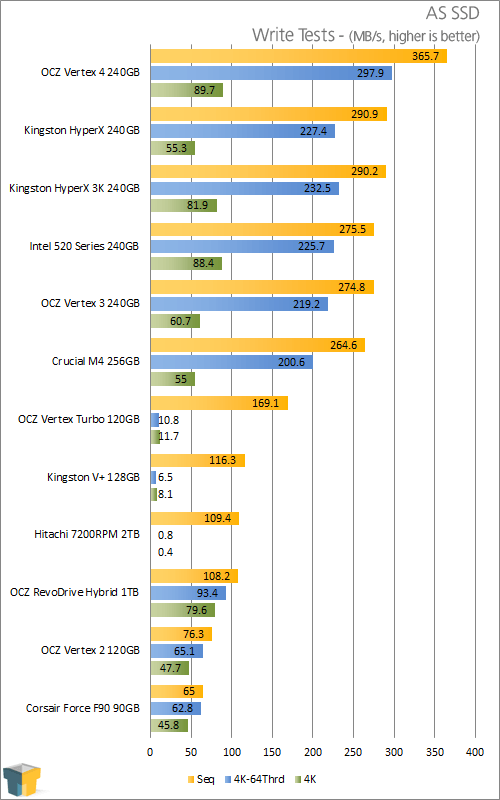 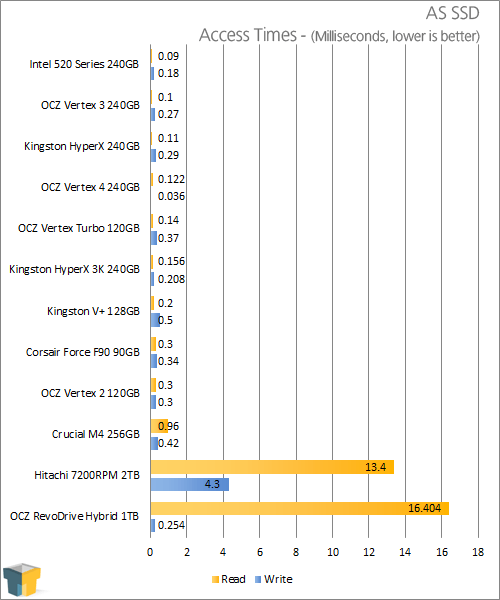 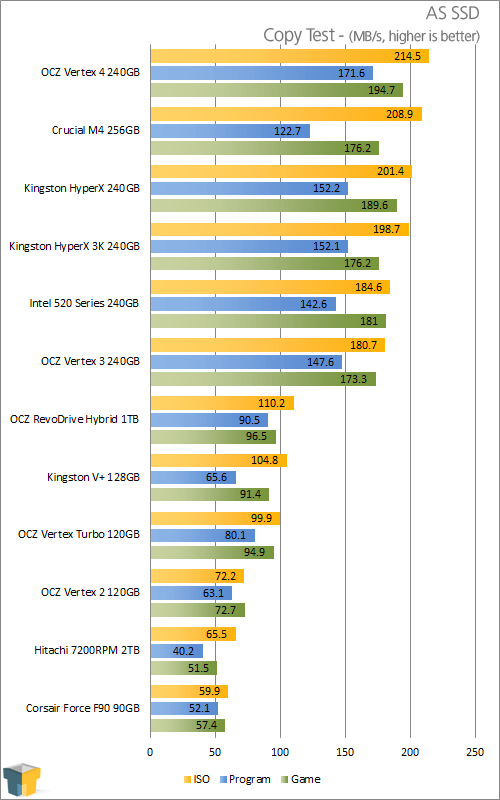 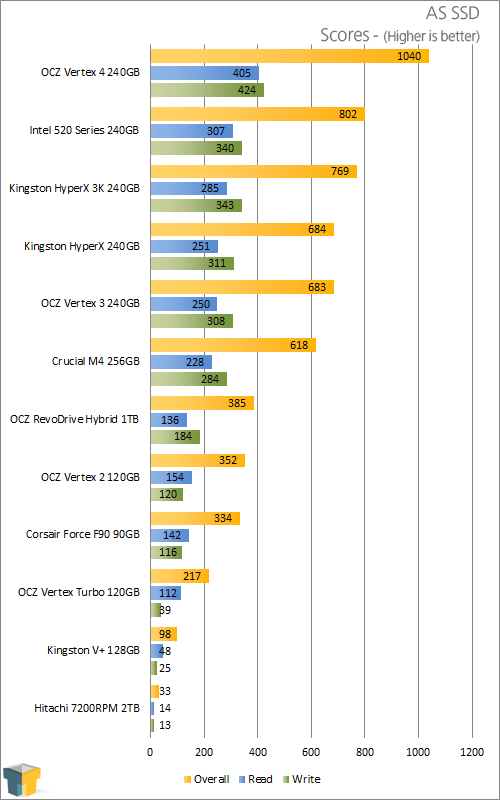 Interestingly, the Vertex 4 gets edged out by just a mere 15-30MB/s on the sequential read test, but puts forth some extraordinarily better 4K-thrd results compared to the m4, and in fact better 4K and 4k-thrd read results than every other SSD here, which is no small feat.

4K-Thrd is similar to the 4K test but spawns multiple requests; basically this tests how good the SSD is at handling multiple file actions at once, aka queue depth. Queue depth wasn’t an issue with HDDs as they were generally too slow to handle more than a few simultaneous IOPS at a time (as illustrated in our Iometer results), but with SSDs it is important to have a good controller with a high queue depth capability for the best, most consistent performance.

The Vertex 4 has no trouble taking an easy lead in all of the write tests, surprisingly able to offer better 4K-Thrd write performance than a SandForce SF-2281 can with best case sequential performance. Not only does it take the lead, but more importantly it delivers consistently better performance regardless of sequential writes or random write IOPS showing the V4’s firmware tuning to be fairly balanced.

While in real world performance nobody will notice the difference between 0.1ms and 0.03ms, it is nonetheless quite impressive to see OCZ’s claims about the ultra-low write access times to be reflected in the results. Noticeable or not, that is still a full order of magnitude difference in the access times and has to be pushing the boundary limits of the underlying NAND’s own capabilities.

With the strong performance in both reads and write tests it is no surprise to see the Vertex 4 get an average overall score of 1040, which is the highest AS SSD score we have seen to date. Individual read and write scores are also both comfortably higher than the nearest competitor at 405 and 424 respectively.