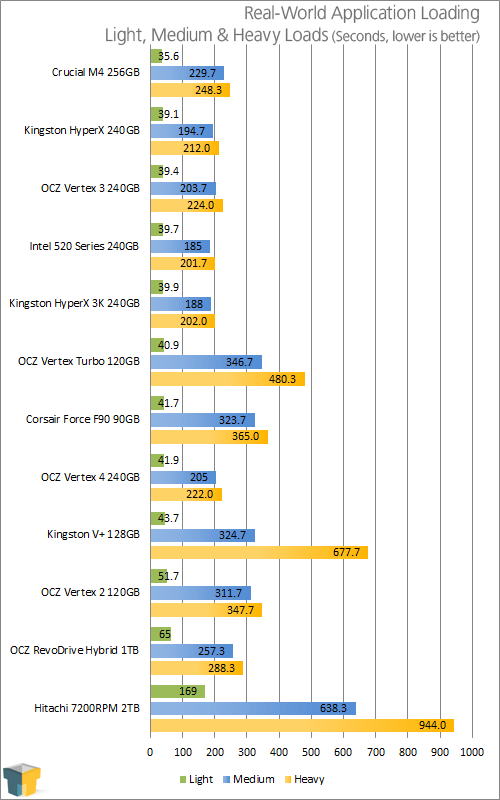 So after quite a few paragraphs and a single large graph, how does the Vertex 4 shape up? Very well, as it turns out. The V4 is able to go toe-to-toe with the SandForce-powered Vertex 3 in the medium and heavy batch tests, and deliver respectable results in the light startup test.

The Vertex 4 delivers a respectable 42 second startup time in the light batch test, placing it within three seconds of the fastest result in our graph. Compare this to the 169 seconds an average 2TB hard drive would require, meaning the Vertex 4 can boot Windows 7, start and load files into Photoshop CS5, and start some commonly used programs in under one minute, or a mere fourth of the time required for a hard disk drive.

If the light batch test was a 100 meter dash, then the medium test is more like a 500 meter relay event. The Vertex 4 turns in a time of 205 seconds which is impeccably within four seconds of the quickest SSD result we have seen. This is close enough to be considered a tie, really. While this equates to 3.5 minutes, the HDD took a full 10.5 minutes to complete the same task.

The heavy batch test is where things get really interesting. If sticking to our sprinting analogy this would be akin to the same 500 meter relay as before, but with all the runners carrying a 30lb backpack strapped to their backs. Weaker SSD controllers will struggle here, but despite adding the 5GB program file folder anti-virus scan the Vertex 4 only needed an additional 17 seconds to complete the race. This is a few seconds faster than the V3 and a full 26 seconds quicker than the m4. By comparison, the poor HDD walked across the finish line more than 10 minutes after the V4.