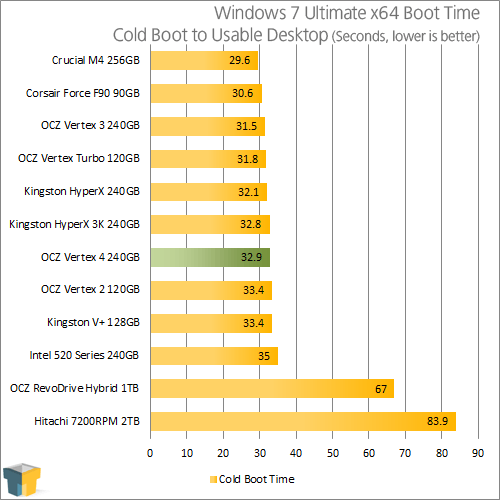 The Vertex 4 turns in a result here about three seconds behind that of the fastest SSD. All of the SSDs are easily capable of handing a mere OS bootup, and doing so in a third of the time of our lone mechanical drive. 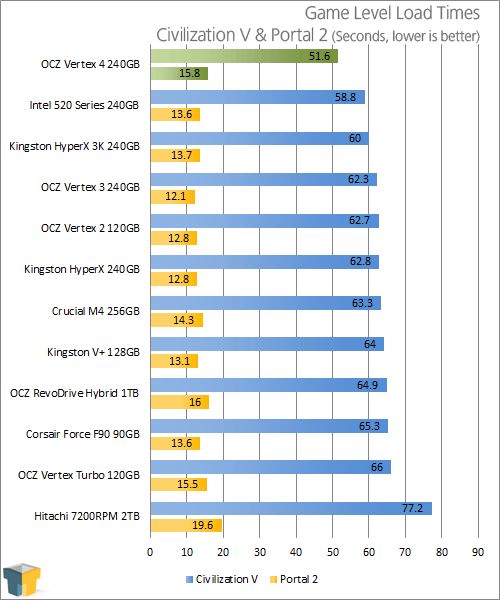 Although the Vertex 4 shows a huge lead here in Civilization V, it turns out the culprit was Steam. Upon launching our game we were greeted with a message kindly informing us Steam was adopting a more efficient, faster file package format. Fortunately for Civilization V gamers we can clearly see the new format is quite effective, however it unfortunately ruins any sort of comparison whatsoever with previous SSD results. The V4 Civ results are simply not comparable to our past SSD results.

Our results with Portal 2 are not so favorable for the V4, and are roughly three seconds behind that of the quickest time for this test. Three seconds is not major given it is still appreciably ahead of the HDD, but it was still a slight surprise.

A quick side note: As we are looking to update out benchmarking methods, if you know of a recent, favorite game that loads exceptionally slow on a hard disk drive that could benefit from an SSD, please feel free to let us know in our forums, and we just may adopt it for future testing!