OCZ’s Vertex series of solid-state drives have become quite the sensation, as anyone following SSD developments will tell you. They were the first official competition to Intel’s X25 solid-state drives and by offering much higher sequential write speeds from the start, were able to hold their own as subsequent firmware updates continued to improve upon small file and IOP performance.

However, it was the eventual addition of TRIM support that they have become one of the most sought after SSDs, with the only exception possibly being Intel’s own X25 G2 drives.

Of course anyone that actually follows the progress of SSDs will also be quick to point out there are two über-fast SSDs currently arriving on the market that push the performance envelope to the edge of SATA’s 3Gb/s capabilities. In fact one of them will even surpass it, requiring the newly-minted SATA 6Gb/s interface to attain maximum performance.

The catch, though, is that the Sandforce-equipped Vertex 2 (and so named Vertex Limited Edition) drives are launching at over a $4 per GB prices, and the cheapest Crucial RealSSD C300 will slot in at $500. While either of those drives will deliver performance only dreamed of, the $500+ starting prices will ensure most keep on dreaming.

Both drives use the same NAND flash via four channels; the only difference being that the Indilinx Barefoot controllers in the Turbo models have been binned by OCZ as higher-quality silicon capable of supporting an overclock, operating at 180MHz instead of the standard 166MHz. This is great if the controller was the sole bottleneck, however in the case of the Barefoot controller used in the Vertex, the NAND flash and lower number of flash channels will ensure performance is fairly close between the Turbo and non-Turbo models. 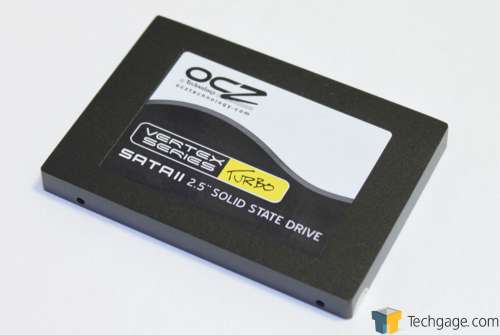 OCZ is a company that isn’t afraid to get the job done right, and on the eve of the product launch it went back to Indilinx to get the drive firmware modified to fix initial performance issues that were found within the Barefoot controller. Needless to say, this delayed the company’s launch plans as it waited until it had the revised firmware in house and installed on every drive before any were shipped to retailers.

After several more subsequent firmware updates that other companies began adopting (one of which enabled TRIM support), OCZ took it one step further and began refining the Vertex firmware itself. It started releasing its own updates, giving the Vertex a slight edge over other drives featuring the same controller due to the extra tweaking. If you are looking for an affordable, high-performing, and reliable SSD, then the Vertex series is a great choice thanks to the long track record of excellent support by OCZ.

As if to prove the old adage that good things come in small packages, the Vertex and Vertex Turbo come in a small, innocuous looking package. Inside, the SSD is firmly nestled in a foam frame and anti-static bag, with an included sheet that covers details about the warranty. 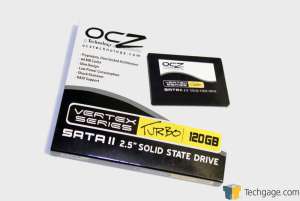 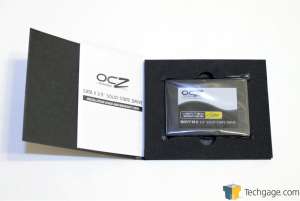 It is worth a brief mention that the booklet mentions a one-year warranty while some misinformation online indicates the warranty is two years. The Vertex is an older, venerable drive and at one point OCZ extended the warranty on them to a full three years from initial date of purchase.

As I already mentioned, the Vertex Turbo uses a higher-clocked cache and Barefoot controller, but the performance gains are not going to be significant. The Mac edition is self-evident, and the Vertex EX series is a server/enterprise oriented drive that is priced well outside the consumer market.

That leaves us with the Vertex LE, which as the name suggests will be a limited edition run with the SF-1500 SandForce controller. After this initial run, OCZ is planning to launch the Vertex 2 as a more permanent model. The catch, however, is that it will only be using the slightly slower SF-1200 controller.

At least for the interim, the longstanding Vertex will stick around awhile longer and at even lower price points than ever before. At the time of this article the 120GB Vertex can be had for $329, and OCZ is presently offering an additional $40 mail in rebate.