For this test we took a 7.16GB Dual-layer DVD image and timed how long was required to transfer it to a different 10GB partition created on the same drive. Keep in mind with a hard disk, this requires the actuator arm to seek back and forth between the source and destination sectors of the disk platter, while any SSD can instantly read and write to multiple flash chips at once. Still, this is not a test of the raw write speeds of a SSD as the SSD controller cannot read & write to the same parts of the NAND flash simultaneously. 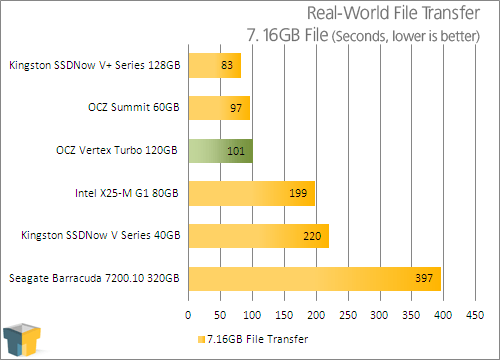 The large sequential nature of a file transfer should favor the hard drive, but all of these SSDs are fast enough that it just doesn’t matter. While the HDD delivers the file in six and a half minutes, the Vertex does so in just a minute and forty-one. 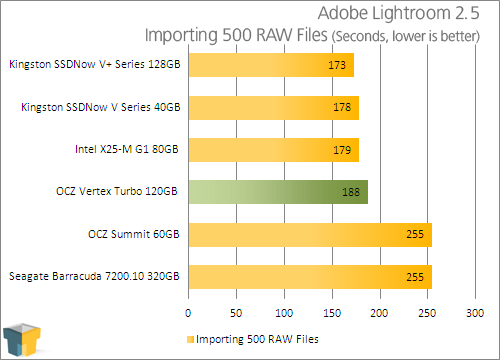 Somewhat interesting is that the results are split into two main groups with the Summit only able to tie the hard drive, while the other SSDs clump together around the 3 minute mark. It appears the Lightroom test is not demanding enough, and another system component (likely the CPU) has become the bottleneck here rather than the storage, at least with our faster SSDs. Remember, Lightroom only utilizes two cores when loading and creating its image library, so it is not fully utilizing our quad-core CPU.