(A side note â€“ if you don’t care to go in-depth with the technical side of loudspeaker design that pertains to the ORB speakers, just skip to the next page. Or perhaps the page after that. That’s where you’ll find the actual listening testing.) 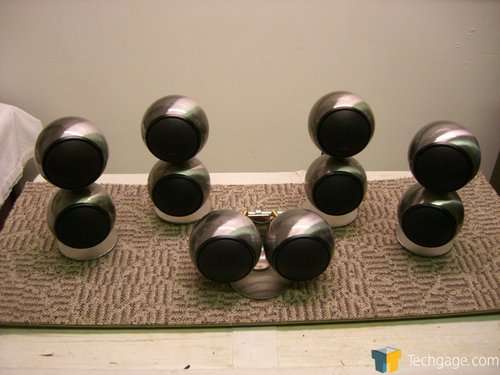 Each satellite speaker is built around a steel orb, which aside from its visual interest, has some technical merit as well. Each sphere is free of flat surfaces or straight lines. What this means is that there’s virtually nothing to flex, which is why spheres are optimum pressure vessels by their very nature. Also, no two paths from the loudspeaker driver to the enclosure wall are the same length, so there’s no buildup of standing waves inside the enclosure to degrade sonic detail. 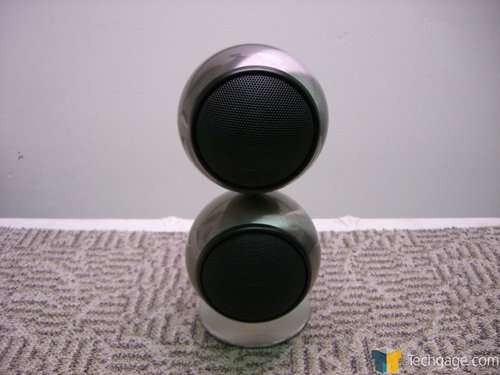 Each speaker pod is loaded with a single 3″ full-range driver. That’s it â€“ there is no passive filtering involved. Each loudspeaker driver is directly coupled to your receiver or amplifier, which improves the electrical damping of the driver’s motion. When a loudspeaker cone is set into motion, it should stop quickly once the voltage is removed. But, as those of you with a physics background are aware, nothing ever comes to a stop instantly. Instead, the cone keeps going.

The ‘soft parts’ â€“ the cone’s flexible rubber surround and the fabric spring at the cone’s apex (called a ‘spider’) are meant to dissipate motion energy chaotically through the material, helping to damp the cone’s motion. But as the cone keeps going, its voice coil moves through the magnetic field, generating a voltage. Your amplifier is designed to absorb this voltage, called “back EMF”, which generates a braking effect, but this small voltage can get lost inside a passive crossover network. Directly coupling the drivers to the amplifier helps improve the tightness of the lower midrange and bass, where cone displacements are most severe.

Another concern wherever single full-range drivers are concerned is the cone’s behavior at high frequencies. A speaker cone is designed to behave as a perfect piston through as wide a range as possible, but eventually the accelerations are so great (at high frequencies) that the cone begins to vibrate in unpredictable ways, causing resonant peaks and dips in the driver’s frequency response. Optimizing the cone’s profile and cross-section can suppress these resonances, or at least make sure that they don’t hang around for very long, improving the detail and clarity that can be expected from speaker drivers.

As an additional measure, a bead of glue has been applied at the cone-surround junction, mass-loading the edge of the cone and ensuring that vibrations which travel away from the center of the cone don’t get reflected back into the center of the cone, further minimizing these ‘standing waves’. The cones of the drivers themselves are made of polypropylene, which has greater internal damping than paper.

The final technological advancement in these speaker drivers is an ‘underhung’ magnetic structure using rare-earth Neodymium magnets, which are ten times stronger than the typical ferrite ceramic ‘donut’ magnet that you typically see. The ‘underhung’ design means that the magnetic gap is longer than the voice coil windings, so the entire length of the voice coil always stays immersed in the magnetic field, for lower distortion. The combination of high-strength magnets and underhung magnetic structures ensures that the cone can hit the high frequencies while remaining smooth and detailed. Each driver is protected by a perforated metal grille. In the case of white ORBs, the grille is painted white to match. 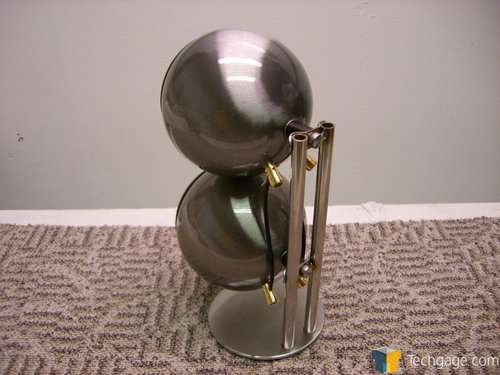 As a final touch, the binding posts on the back of each satellite speaker are spring-loaded and gold-plated, for the best possible contact and wire retention. These are fairly small as binding posts go, however, and I had trouble getting my 16-gauge speaker wire to fit. Needless to say, enormous 12-gauge speaker wires need not apply. In the case of the Mod2 satellite speakers, the two orbs are connected together by short jumper wires. This makes connecting the speaker leads a bit tricky, since you’ve got to push the leads in the bottom of each speaker without pushing the jumper wires out the top.

One last note â€“ the ORB Audio Mod2 speakers are 4-ohm speakers, which mean your receiver will need to be able to drive a 4-ohm load. Even if your receiver or other amplifier is labeled ‘8 ohms’ or greater, don’t despair â€“ driving a lower impedance only means your receiver will generate more heat. So as long as you’ve got plenty of ventilation around your receiver, you’re good to go.

Next, let’s take an in-depth look at the ORB Audio Super Eight subwoofer.