With the Mod2 home theater system, ORB Audio erases all doubt that they’re serious about competing with the big boys. Here are small speakers that deliver undeniably powerful sound for their size, with looks that are sure to impress any picky significant other. I imagine that’s the primary market for the ORBs â€“ those home theater enthusiasts who feel pressured by their significant others to lose the big, bulky boxes for more aesthetically-appealing speakers, but who don’t want to sacrifice true audio performance to get it. 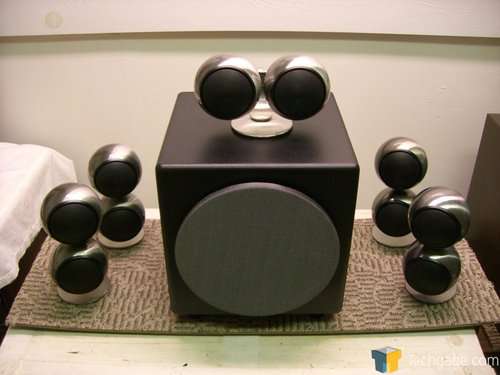 While the ORBs won’t truly replace a good bookshelf speaker in the $250/pair price range, they’re more than competitive with the other multichannel speaker packages that use small satellite speakers, but their unique aesthetics gives them an edge. The ORBs deliver sound that’s sonically pleasing yet honest, without the gee-whiz coloration that some manufacturers add to their speakers to help them sell well in stores.

The ORB Mod2 satellite speakers are insanely crankable, and capable of levels you’d think impossible given their small size and sleek styling. There’s still something to be gained by having a separate tweeter driver and a well-tuned enclosure and crossover, however, so if you can swing it with the lady of the house (or, perhaps, sneak them by), I’d still prefer multi-way bookshelf speakers with larger enclosures, to add more fullness and body to the midbass instead of relying on the subwoofer at upper bass frequencies.

The ORB Audio Super Eight subwoofer really stole the show, and offered quite a bit more true deep bass than I’ve heard from any subwoofer with an 8″ driver â€“ it’s even got some 10″ subs beat in terms of its ability to go low loudly, and do it cleanly. The Super Eight subwoofer lent marvelous depth and impact to music and movies, though it isn’t the cleanest or most musical subwoofer I’ve ever experienced, perhaps because of some added equalization at the bottom of the sub’s range, which imparts a sense of looseness and ‘fatness’ that stifles musicality. Still, for its price, it adds real value to this system, and you won’t feel tempted to look elsewhere for your subwoofage.

ORB Audio touts its lack of extra markups added by dealers and distributors as an advantage of the direct sales model, though that doesn’t mean that the ORBs are particularly inexpensive. The base price of a 5.1-channel ORB Audio Mod2 system as of this writing is $1229, but as-tested, my sample would cost you $1649. When you consider that you get five great-looking speakers and a competent subwoofer as part of the deal, that doesn’t seem so bad, though it’s worth noting that Bose’s flagship Acoustimass 16 sound system, a 6.1 speaker package, only costs $1149.

I mention Bose since they’re another company that commands a pretty penny for their products, but the ORBs are still less expensive that the original small spherical speakers, the Anthony Gallo Nucleus Micro speakers. Essentially what I’m saying is this: the ORB Audio speakers offer a great alternative to other small-satellite packages like the Bose Acoustimass, with significantly better audio performance, but don’t expect to necessarily pay less to get it.

The ORBs have a 30-day money-back guarantee, so feel free to check them out in-home for yourself and see if they’re for you. And if they aren’t, just send them back to ORB (though shipping that hefty sub is a bitter pill to swallow in that arrangement.)

One last thing â€“ the ORBs would make a fabulous companion to a simple home theater system headed by a home theater PC and multichannel receiver â€“ so if there’s a home theater PC in your future, definitely put the ORBs on your short list if you want a smaller setup that’s still potent enough to deliver the real home theater goods.

We were told that a fully amplified ORB speaker system is also in the works, for the PC audio market, so be looking for those as well. The ORB Mod2 home theater system earns a Techgage score of 8, for their excellent representation of the multichannel speaker package category and wonderful performance overall. If they were $100-$200 less expensive, however, I feel a ‘9’ score could have been easily in hand.