by Rob Williams on September 10, 2009 in Processors

We found out earlier this week that Intel’s Lynnfield-based processors are fast, but who said that cranking the clocks to make them even faster was a bad idea? In this article, we take both the Core i5-750 and i7-870 for an overclocking joyride, and the stable overclocks we were able to achieve is nothing short of impressive.

As we discovered in our article earlier this week, the Core i5-750 is a fantastic CPU. It has superb power efficiency, is fast when compared to virtually anything from the Core 2 Quad line-up, and the best part? It’s ~$199 in quantities of 1,000 (so, more like $210 at e-tailers). What makes the price so good is that the i5-750 is faster in many ways than the QX9650 Extreme Edition which was released two years ago. The retail price of that chip? $999 at launch.

So we know that the i5-750 is a good value, but as mentioned in the intro, there’s nothing quite like squeezing the life out of our processors to make sure we get our money’s worth. Fortunately, achieving an impressive overclock on this CPU isn’t at all difficult, any I’m confident that anyone will be able to match, or beat what we accomplished.

First, we should reiterate that our first goal when overclocking is to see how far the chip can be pushed while retaining stock voltages. After all, increased voltages mean two things: greater power consumption, and higher temperatures. So if we retain stock voltages, it means we got a sweet performance boost with very little cost on the side (except for the life of the processor – pushing any piece of hardware out of spec will lessen the life span).

With the Core i5-750, our sweet spot turned out to be 3.46GHz, or with Turbo, 3.63GHz. This required a Host Clock speed of 173MHz, which is far beyond the Lynnfield spec of 133MHz, but despite that, it required absolutely no additional voltage to retain full stability. As you can also see by the Core Voltage section in our CPU-Z screenshot, no additional voltage was required there, either. 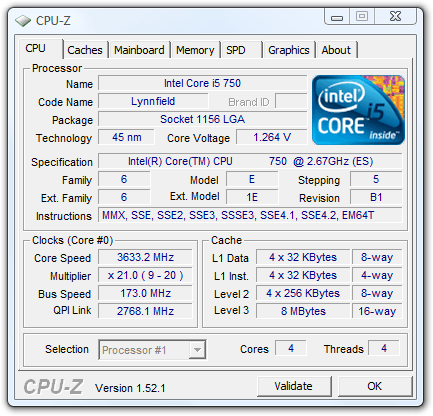 Does the real-world performance reflect that 30% gain in clock speed? Let’s take a look…

Now this is what I call a worthwhile overclock! Some tests fared better than others, but for most of our tests, we saw a 25% or 26% increase in performance. Sure, it doesn’t quite hit the 30% we were looking for, but who’s to complain? We’re talking about a free 25% performance boost, on a processor that happens to be very affordable.

One of the downsides of the i5-750 is the lack of HyperThreading, but that’s understandable given the much more affordable price. Still, an overclock like this pretty much negates a boost in performance that HyperThreading would give us as a lower clock speed, so the value here is through the roof.

For those interested in going a wee bit out of spec, pumping the voltage will allow you to hit an even greater overclock. In the case of our “max” stable overclock, the CPU voltage was bumped to 1.40v (+0.05v above Intel’s maximum recommended), and our “QPI/Vtt” voltage saw a boost from 1.10v to 1.30v – still well within safe limits. Although 1.40v on the CPU isn’t exactly dangerous, it will be if you don’t have sufficient cooling.

It’s also important to note that for overclocks that require added voltage, you may want to resist applying it for 24/7 use. If you don’t mind shortening your CPU’s lifespan at an accelerated pace, then sticking to stock voltages is your best bet. I should also add that when I talk about overclocking shortening a processors life, I’m talking about years, not months. You’ll only kill a CPU in under a year if you go really crazy with the voltage.

That said, what did we accomplish? 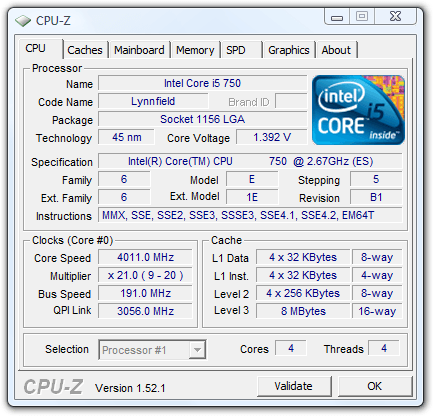 Don’t let the red bars in TMonitor (Turbo Monitor) freak you out. That’s not caused by an unstable overclock, but rather by the fact that our frequency has surpassed the predicted figure at the top of the axis. Hopefully, future versions of TMonitor will support such high overclocks.

For the past while, 4.0GHz seemed to have become a standard of what overclockers hope to accomplish with their latest purchase, from the lowest-end to the highest-end. Coupled with the robust Lynnfield architecture, though, 4.0GHz means a little bit more on this chip than it does on say, a Core 2 Quad at the same frequency.