In the graphics card market, Palit is a well-known name, and the fact is, that’s because they are a world-leading manufacturer. You might be wondering how that’s possible since we’ve only begun seeing their cards on these shores. The simple answer? Up until now, they’ve only been available elsewhere in the world, primarily in China. There, the Palit name is synonymous with video cards, just like eVGA is on these shores.

In an attempt to conquer the world, Palit is finally branching into the US and now have cards available at a few e-tailers – most notably Tiger Direct. Unlike eVGA, XFX and others, Palit doesn’t have a preference with GPUs, so they produce both NVIDIA and ATI cards.

In talking to Palit earlier this year, we were briefed on Palit as a company and the plans they have for the future, and I admit, it all sounds great. The folks there have an obvious passion for producing high-quality products, and though it may seem that anyone can churn out a graphics card, Palit makes sure that the resulting card you receive is of high-quality… and one that’s also designed with overclocking in mind.

The card we are taking a look at today is the 8600GT Super+1GB, one that includes 1GB of GDDR2 as the name suggests. You might call that a waste of time, and for the most part, you’d be right on the money. As we will see in our benchmark results, the ASUS 8600GT with 256MB suffered nothing due to it’s lack of available memory. In general, though, having that much memory available should improve performance at higher resolutions. But, this is an 8600GT we are dealing with, so high-resolutions are not something we would be considering anyway.

True to NVIDIA reference design, Palit’s 8600GT sticks to the 540MHz clock speed and 700MHz for the memory. But as mentioned, their cards are designed with overclocking in mind, so we will try to bump both figures up as much as we can while retaining stability.

The 8600GT card falls right below the 8600GTS in the 8-series scheme of things, but both clocks on the former are significantly lower. With performance/price taken into consideration, it all scales well with each other. One important fact to note though, is that the 1GB version of this card retails for a full $30 more than Palit’s own 256MB version. That’s quite a premium.

Kept well-secured in a bright green box, the frog mascot assures us that we chose the right card. Considering that the ASUS 8600GT card came in a package about 2.5x the volume of the Palit box, I have to commend them for using packaging that’s more environmentally sensible. 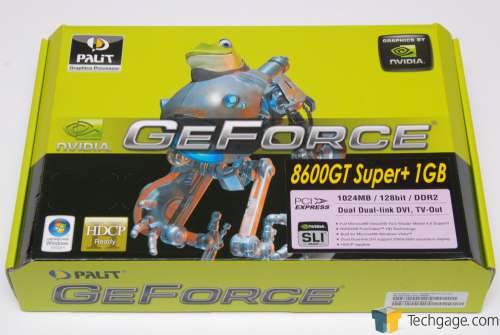 Similar to reference design, Palit uses a large gold cooler to help keep the GPU cool. Given the power that the card offers, a massive cooler is not required by any stretch. Clean… simple… and gets the job done. 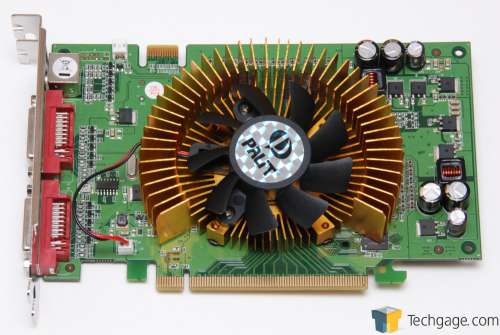 Two DVI ports and a TV-Out is available for the taking. Also interesting is the fact that this is a dual-slot card. Since the competition manage with single-slot coolers, it would have been nice to see that here also. But, to go along with Palit’s vision of efficient products, they promise the cooler is unparallelled in performance. 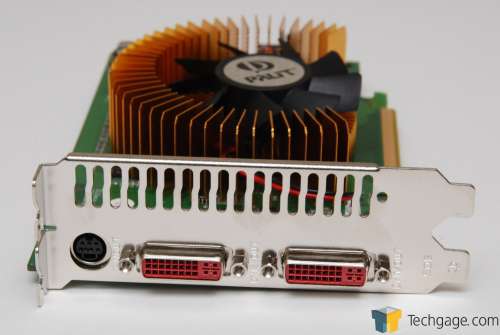 Besides the quiet operation, no PCI-E power connector is required either, making this a good solution for those looking to spice up their modest PC. With that, let’s get to the meat of the review and see what the card is made of.