NVIDIA’s 9-series cards came out only a few months ago, and while the overall selection is slim, there seems to be a card for everyone. The 9800 GX2 is for those who crave insane power (and also run high resolutions), while the 9800 GTX is for those who want the best single-GPU solution available, and as we found out in our review of ASUS’ version, it’s a great card indeed.

Then we come to the 9600 GT, a mid-range card that first retailed for just over $200, but now hovers between $125 – $150, thanks in part to generous mail-in rebates from popular vendors. Out of all the 9-series cards, the 9600 GT became my favorite after being able to first toy with it. For the price, it offers incredible performance… and there’s really not much else to say.

So today we have the 9600 GSO, which is a bit odd. Not to mention a little ironic. Around the same time that this card was launched, NVIDIA pledged to simplify their product line-up, so that the regular consumer can differentiate different models. Well, the GSO goes straight against that, and it manages to confuse even me.

Overall, its specs are quite close to the 9600 GT, give or take in certain areas. With the GTX 200 launch next month, I think it’s clear that NVIDIA wanted to first unload as much G92 stock as possible, and from that thought, the 9600 GSO was born.

Compared to the 9600 GT, the GSO has slower frequencies overall, in addition to less available memory and a lower memory bus. What would have made sense to me is if the card stayed with the 64 stream processors of the 9600 GT, because then it could be marketed as a $119 card (or even less) and become an ultimate budget product, but instead, NVIDIA bumped up the processors to 96.

Whew, let’s attempt to wrap our heads around this. With a lower memory bus and less available memory, the bandwidth is going to be lower, which means games should almost always perform better at higher resolution (really high) with the 9600 GT. But on the other hand, because the GSO has more processors, it can compute more calculations per second than the 9600 GT, even with the slower shader clock.

From a reference standpoint, the 9600 GT will still perform better overall than the GSO, despite the higher amount of stream processors. To help make things a little more interesting, Palit’s Sonic edition comes pre-overclocked and also has more memory on board, 768MB, just like the 8800 GTX. Because of these improvements, their GSO is designed to perform better than a reference 9600 GT. We’ll see in our tests if that’s the case.

But even from a reference standpoint, the GSO seems like an odd model to launch. It’s supposed to retail for $139, while the 9600 GT’s original retail price was $159. So at the end of the day, it will all come down to pricing, and if the GSO ends up hovering around the $120 mark, then it will be a great bargain. It might very well have to, since many 9600 GTs can be had for around $140 – $150 as it stands today.

The GSO Sonic includes the box-like cover that’s seen on a few other recent Palit cards. I personally don’t find this attractive, but it sure helps portray the the image that the card is well-built. Underneath is a copper-based heatsink with numerous fins, along with two heatpipes protruding out of the top. 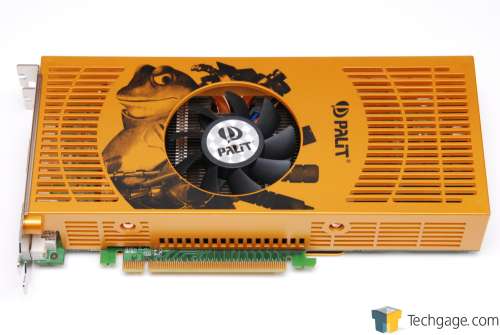 On the back are dual DVI-D ports and a TV-Out. For those planning to use HDMI, an adapter has been included. Since the 9-series all support HDCP, viewing high-def content won’t prove an issue. For those still stuck with VGA connections, Palit also included an adapter for you. 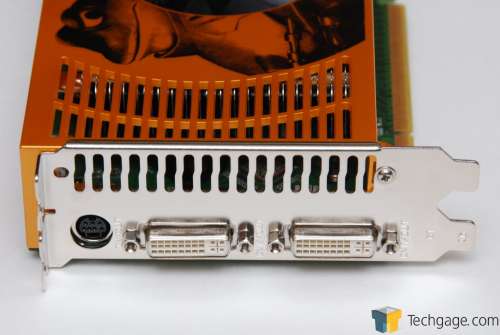 The lone power connector plugs into the end of the card, and once again I cannot help but realize how sturdy this shroud makes the card seem. Peering into the holes, we can see that Palit is using a 3-phase power solution for this card. 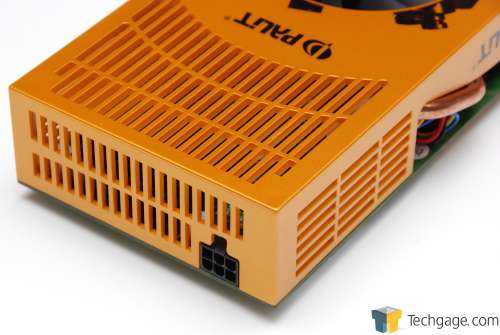 Here you can see the dual heatpipes, along with the SLI bridge and audio connector for HDMI users. 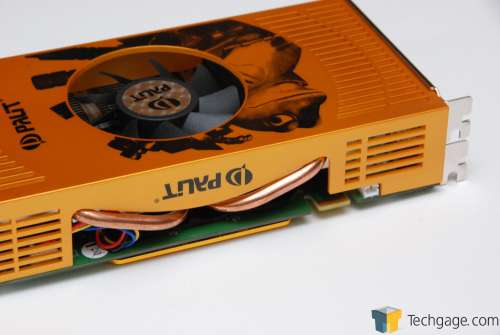 Below is what I assume Palit meant when I was told their cards can stand on their own! 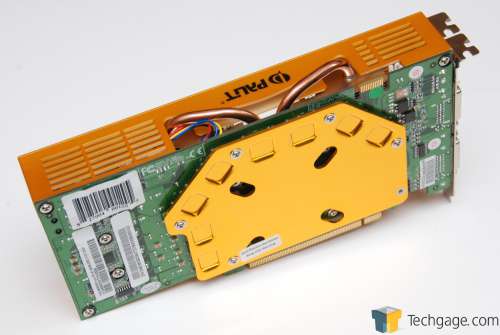 Overall, not the best-looking card on the planet, in my opinion, but as I mentioned, it is well-designed and well-built. Palit utilizes a 3-phase power solution, so the cards efficiency should be top of its class, and could also result in improved overclocking.