If you’ve read any of my processor reviews, you are probably aware that I don’t much care for an unstable overclock. As far as I am concerned, a high overclock is only good if it’s stable, because realistically, no one purchases a new GPU for the sake of only finding the maximum overclock. That is why I focus on finding the max stable overclock, rather than an overclock that can barely pass a benchmark run.

To find a max stable overclock, I first find an overclock that I believe could be stable. Once I do that, I’ll run a single loop of 3DMark 2006 to test for stability and to look for artifacts. If that run passes successfully, I’ll jump into a game quickly to see if the same results are exhibited in real-world gameplay. If that proves successful, I then run a loop of 3DMark 2006 for 4 – 8 hours at 2560×1600 2xAA to stress the card to its limit.

If after that point, the card is deemed stable (as in, no crashes occurred and there are still no artifacts), then I will proceed with benchmarking four select titles again: Call of Duty 4, Crysis, Half-Life 2: Episode Two and also Unreal Tournament III.

All overclocked testing occurs at 2560×1600 for the simple fact that it’s such a strenuous resolution. For comparisons sake, I also include results from a card that’s a step up from our overclocked model.

If all GSOs overclock like this, then the decision on what card to buy might be made easier. Adding 190MHz to the core and having the card remain stable is quite a feat, and as we can see in the chart below, we managed to out-perform a stock 9600 GT in CoD4 and Crysis, but fell a bit short in HL2 and UTIII. Great results overall though. 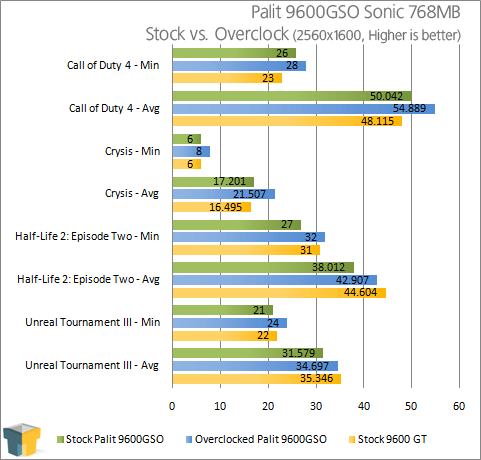 Bear in mind that one of the reasons for increase might be due to the onboard 768MB of memory, but even with the stock 384MB paired with a nice overclock, the results should not be far different.