With so many options on the market right now, what makes the GTX 280 a good choice for anyone? The fact that it is the highest-performing card out there sure helps, but it’s still not for everyone. To join this club, you better hope you have one massive resolution to push.

Launches of new GPUs happen all the time, but it’s not that often that one so powerful, so big, and so drool-worthy exits the gate. The latest case is NVIDIA’s GTX 200 series, or more specifically, the GTX 280, which we will be taking a look at today, courtesy of Palit.

Because the card was released almost a month ago, I won’t get in-depth with regards to the specifics of what makes the GTX 200 series so great, but what you should know is that the new cards are designed for the ultimate gamers and those who need an extraordinarily fast GPU for non-gaming purposes, such as Folding or other applications that require specific calculation.

When the GTX 280 first launched, it retailed for the luxury price of $649. This coming at a time when everyone has already been in the groove of seeing killer >$300 GPUs for quite a while. NVIDIA knew it would be a hard sell, but it was a brand-new launch and one truly worthy of the “ultimate” title.

But then AMD unleashed their HD 4800, which delivered very surprising results. That immediately caused a few quiet price drops of the GTX 260 and 280, so that $649 price tag is a thing of the past. It’s unfortunate for those early adopters, because most of the cards can now be found for around $500.

Closer Look at the Palit GTX 280

What we have here is a completely new launch from NVIDIA. The 9-series was a little lackluster in that nothing was truly new, but that changes completely with the GTX 280. The core itself is larger, at 576mm2, packing in over a staggering 1.4 billion transistors. Compare that to the 820 million that Intel’s latest 45nm Quad-Cores include. 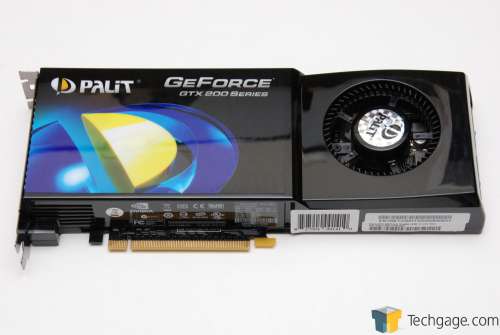 The physical die increase isn’t the only change. The GTX 280, as seen in the table below, features 240 stream processors operating at 1296MHz, with the core itself operating at 602MHz. I have to wonder why they didn’t simply clock the card at 600/1300, but hey, this is at least interesting, right?

Further down the line is an 1107MHz GDDR3 speed, running on a 512-bit memory bus width. It’s also the first gamer-oriented GPU with 1GB of memory onboard. Many graphic card manufacturers have been putting 1GB on their cards for some time, such as Palit, but this is the first to officially leave NVIDIA with that specification.

Another notable feature is 3-way SLI support. As we will soon see, the GTX 280 is the furthest thing from being a lightweight, so the thought of putting three together is simply insane. If one card can handle virtually any game out there at 2560×1600 max details, then just imagine how having more than one could future-proof a rig!

As mentioned in the intro, our card comes from Palit, a relatively new entrant into the US and Canadian market. They are by no means a new company, however, as they officially rank as the third largest graphic card manufacturer in the world. It took them a while to break into North America, but it’s now happened, and they are off to a great start. 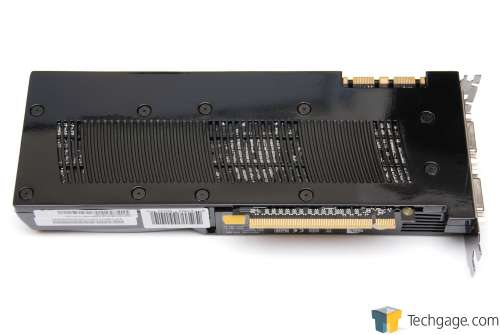 The card follows the reference design to a T, as will all current GTX 280 cards out there, so the primary difference between them all will be the graphic on the front, the warranty and the accessories. Palit offers a 2-year warranty on all of their graphic cards. This may seem odd since some companies choose to give lifetime warranties, but Palit says that lifetime warranties are all for show. Considering that the warranties from competitors will only give you back the current value of the card you send in, it doesn’t seem that exciting.

Like the highest-end cards from AMD’s last-generation, the GTX 280 requires both a 6-pin and 8-pin connector, found on many new mid-range and higher power supplies. It’s all about stability, and a card this powerful could use as much as it can get. 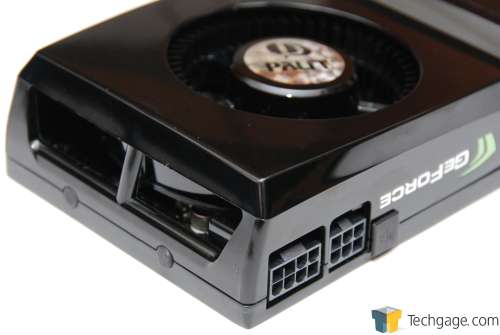 As you would expect, there are two dual-link DVI ports found at the back, as well as a TV-Out. For those needing HDMI or VGA, Palit includes adapters in the box. 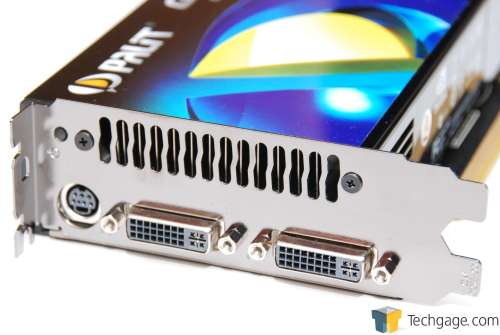 The last shot is to show off the SLI bridge connector, and also the unique air duct on top. 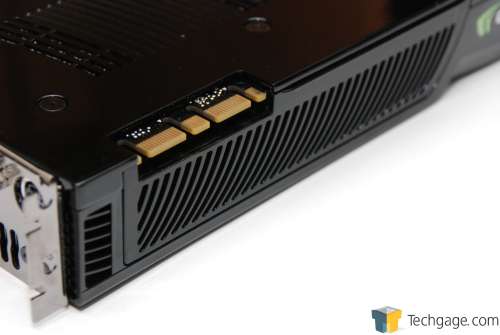