by Rob Williams on September 1, 2008 in Graphics & Displays

If you’ve been holding off on an upgrade for a while, there’s no reason to continue if a gaming addiction is pulling at your sleeve. The selection for mid-range cards right now is ideal, and anything you pick up will deliver good performance for the money. The best card for the buck right now might be the HD 4870, and we take Palit’s version for a spin to find out why.

Earlier this month, we posted a look at AMD’s latest high-end dual-GPU offering, the HD 4870 X2. To say we were impressed would really be an understatement, because AMD pulled out a weapon that made NVIDIA’s newly-launched GTX 280 look silly by comparison. It was the first time in a while we saw things play out this way, so it’s been interesting to watch.

What that review lacked, though, were some single-GPU results of the same card. We didn’t do it on purpose, but it is generally difficult to benchmark a card that isn’t in the lab. Ironically, we received one a few days after that article, so I jumped right to testing to see just how great of a choice it is in the GPU scheme of things, both with regards to performance and price.

One thing we did know, is that the HD 4870 X2 and two HD 4870 cards in Crossfire offer almost identical performance. The problem, though, is that the HD 4870 X2 costs less than two separate HD 4870’s at this point in time. That complicates the decision a little for some, but what I’d recommend is picking up a single card for now, then wait for the cards to go down in price before picking up another. The HD 4870, as we will see, is a seriously powerful card, and one year down the road, adding a second one in really shouldn’t detract from your game play experience in any notable way, even at 2560×1600.

Of course, it’s all a matter of need. If you are running a 1920×1200 display and are not entirely peeved that you can’t turn AA up all the way, then this single GPU is going to keep you happy for a while. Of course, I used that statement earlier this year with regards to, what, five different GPUs? It really is becoming increasingly difficult to predict how things will go, but it’s certainly been exciting.

The HD 4870 offers some considerable upgrades over the HD 4850, such as the core clock, which has been bumped up to 750MHz, compared to the HD 4850’s 625MHz. The memory frequency is oddly lower, but the HD 4870 features the already-faster GDDR5, improving upon bandwidth, latencies and voltage requirements. Both cards feature 800 stream processors and 512MB of memory, along with the 256-bit memory bus. 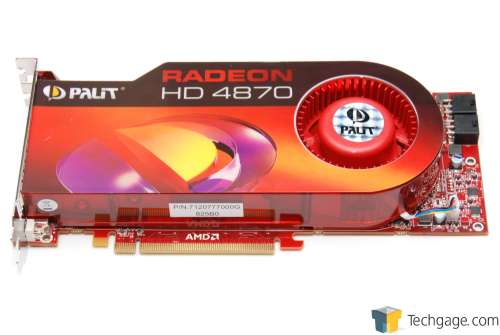 What sets Palit from the rest? Talking to the folks there, it’s quickly evident that they have a real passion for quality. They don’t have any desire to take a reference card and simply slap their sticker on it, but rather improve upon the initial design in various ways to improve the performance, overclocking-ability and durability.

One feature that Palit has implemented into many of their recent GPUs is a three-phase power solution, while the reference design only calls for two. Due to time, I was unable to haul the cooler off to check that out, but Palit assures me that it’s there. Another way they improve upon the launch design is with higher-quality capacitors. AMD and NVIDIA have been known to stick to the what will get the card by, but Palit wants to make sure their cards last a while (after all, RMA’s cost more money in the long-run) and also become the best overclockers.

As you’d expect, the HD 4850 and HD 4870 both support two cards in Crossfire mode, but as you’ll see below, it will cost you a powerful power supply, one with four separate 6-pin PCI-E connectors. Interestingly, all that’s needed to power two GPUs on the same card (HD 4870 X2) is two extra ground wires. For non-Crossfire setups, a well-built 550W should deliver more than enough power. 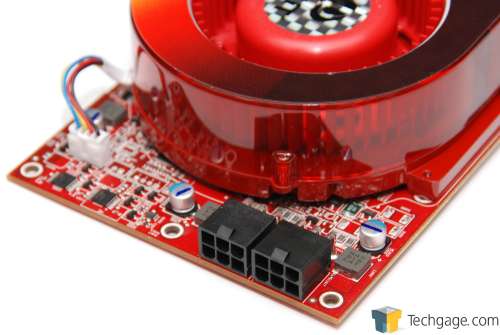 Palit’s offering includes two DVI ports and a TV-Out, although HDMI and VGA are both possible with included adapters. The card supports HDCP, so using the HDMI adapter should deliver excellent Blu-ray performance and quality. 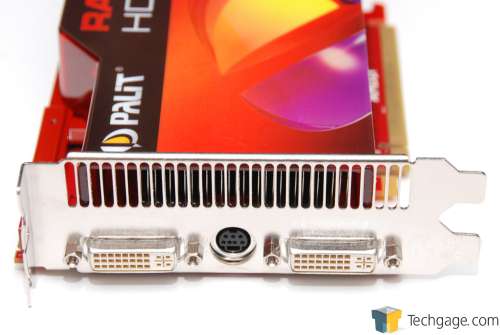 Below you can see the Crossfire connector and also a warning label. It denotes a hot surface, and I for one, can verify that this warning is well-warranted. I won’t get into how I found out, however. 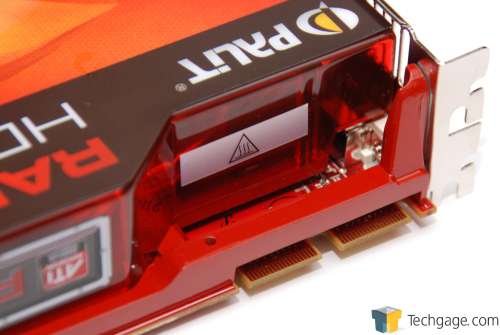 In way of included accessories we found an install guide, Crossfire connector, the DVI and VGA adapters, driver CD-Rom, TV-Out cable and also a dual-Molex power connector used to create an extra PCI-E 6-pin, in case your PSU only includes one. 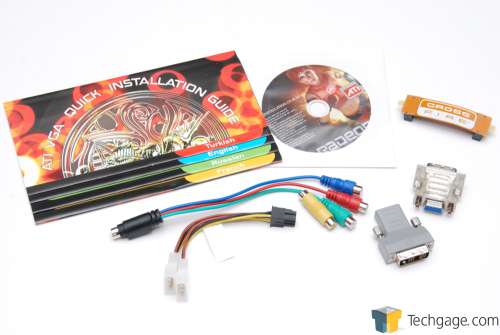 Palit did a solid job with the presentation of the card, and the included accessories are far from lacking. Their card offers a 3-phase power solution and slightly higher-quality capacitors, so we’ll see if that makes a difference in our overclocking tests.

On the following page, we’ll review our testing methodology, which is a highly-recommended read if you haven’t read it before, or if you are new to the site.