I should mention also that I had wanted to include results from both Crysis and Half-Life 2: Episode Two, but due to what I believe were driver issues, I was unable. AMD is working to figure out the reason I had such issues, and I will follow-up with results from those two games once it’s been sorted out. For now, I don’t know what to blame, since other editors don’t seem to have the same issues I do. Oddly enough, it’s just those two titles, as performance everywhere else is just fine.

That aside, the four games I ran were first run on the same general settings that I normally run them at during the 2560×1600 runs. The reason I choose such a large resolution is simple… it’s the most demanding. Proof of just how demanding is laid in the fact that while 1920×1200 delivers 2.3 million pixels, 2560×1600 delivers 4.1 million. That is not a small increase.

After those basic tests were done, the Anti-Aliasing and general settings were amped up to much higher levels, in order to see which card could better handle the stress. Please note these settings for the higher setting of each set: 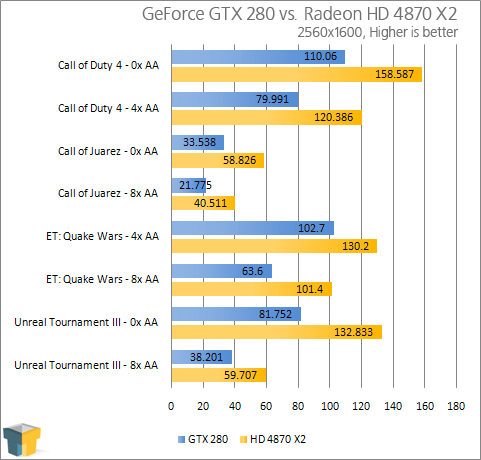 Yes, it goes without saying, the HD 4870 X2 is one heck of a card, and really puts a damper on NVIDIA’s recently-launched GTX 280.

How about similar tests with 3DMark Vantage? 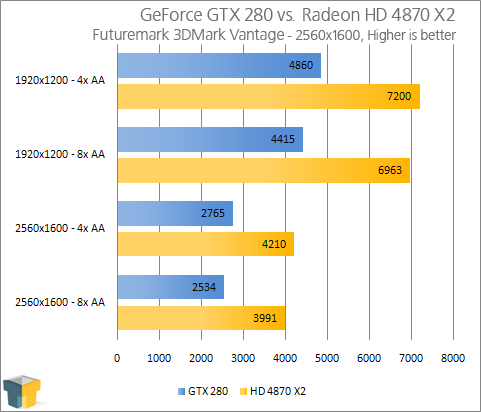 At the absolute maximum, the HD 4870 X2 saw a 57% score increase over the GTX 280. Of course, it’s nothing but a mere over-glorified time demo, but those results are impressive no matter how you view things.