In testing power consumption for our graphic cards, the system components are kept consistent to help keep accurate results. To capture wattage, a Kill-a-Watt is used. It is plugged straight into the wall and the PSU is plugged in directly to it. After the computer boots into Windows and is left idle for five minutes, the idle wattage is captured. 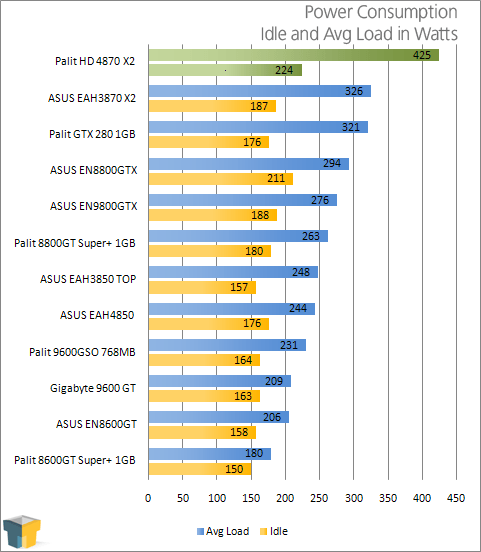 Can anyone say “Whoa!”? The HD 4870 X2 clearly dominates all charts, including this one. Unfortunately, I didn’t have two single HD 4870’s to test in Crossfire, but I’m told the X2 will use slightly less power overall. It also manages to use 104W more than the GTX 280. One thing is for sure, you will want a good power supply to back this puppy up.

In the intro, I did the obvious and mentioned about AMD’s recent struggles. Well, we can finish off this article knowing that AMD’s ATI division is back in action, and their latest batch of GPUs aren’t only impressive, but they well take over the competition.

While the HD 4850 and HD 4870 forced NVIDIA to not only lower their prices, but even release a new model, the HD 4870 X2 is going to leave them scrambling for who knows where. The GTX 280 is without a doubt an extremely high-performance graphics card, but the HD 4870 X2 clearly dominates every-single one of our tests. That’s hard to ignore. GTX 260’s in SLI might change things a little, but the HD 4870 X2 still has clear benefits, such as the ability to run a single GPU and also the lack of a requirement to run an NVIDIA-based motherboard. 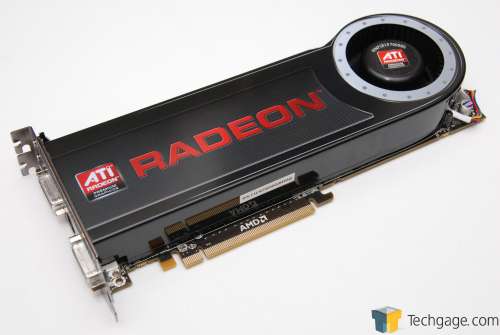 Pricing-wise, the HD 4870 X2 costs $100 more than the GTX 280, and as I mentioned in the intro, that increase is actually justified, especially if you run ultra-high resolutions. That’s not to say that $550, or even $450 isn’t a lot of cash, but comparatively speaking, it’s actually well-priced. The current price for a single-GPU HD 4870 is around $270, so that makes the X2 cheaper than going the Crossfire route. Another plus.

Exactly why the $100 is justified can be seen in our results. At the absolute minimum, this card gave us results 27% better than the GTX 280, and in most cases, that number hovered closer to ~45%, with one even going as high as ~70%. That much of a boost for 20% extra cost seems entirely reasonable.

I still have to stress that for such an expensive card, you are going to want a beefy resolution. Anything lower than 1920×1200 is overkill on this card, even if you want to bump up the anti-aliasing. Sure, AA looks better, but at this price point, you might as well stick with what you have and just purchase a $300 monitor and then an HD 4870 or GTX 260, which will still handle 1920×1200 with absolute ease.

It’s all a matter of what you are looking for. If you want the fastest card on the market, this is it, hands-hand. NVIDIA was the clearly dominant player in the industry for quite a while, but AMD have finally struck back and proved to the world that they are here to stay, and I cannot wait to see what comes out of them next.

It doesn’t require much contemplation; this card well-deserves an Editor’s Choice award.