While Crysis has the ability to bring any system to its knees with reasonable graphic settings, Call of Duty 4 is a title that looks great no matter what setting you choose, even if you have it running well! It’s also one of the few games on the market that will actually benefit from having more than one core in your machine.

The level chosen here is “The Bog”, for the simple fact that it’s very intensive on the system. Though it takes place at night, there is more gunfire, explosions and specular lighting than you can shake an assault rifle at.

Our run consists of proceeding through the level to a point where we are about to leave a building we entered a minute before, after killing off a slew of enemies. The entire run-through takes about three minutes on average. 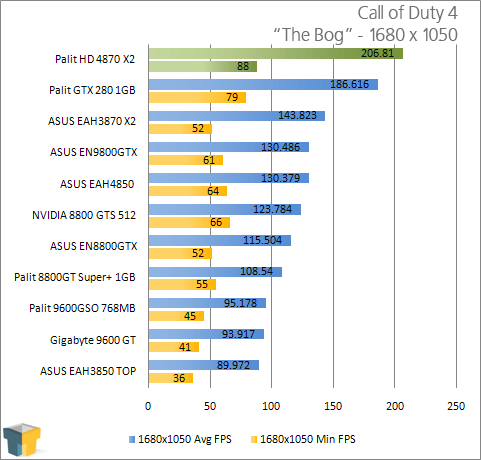 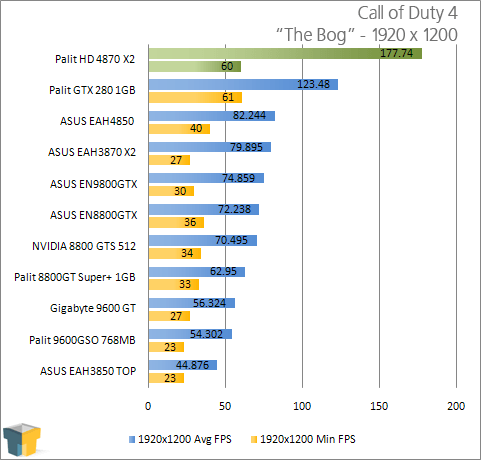 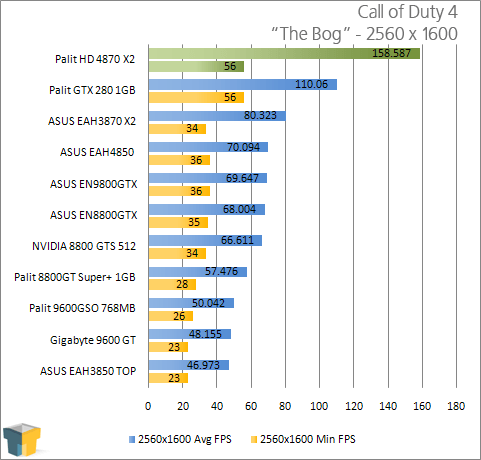 As we expected, our lower-end resolution of 1680×1050 proved a simple task for the HD 4870 X2, and because the game isn’t pushing any sort of boundary, the results are only slightly higher than the GTX 280.

The jaw-dropping begins at 1920×1200 and higher, as seen above. It’s almost difficult to fathom in some regards, because when NVIDIA launched their GTX 280 only a month ago, it became the highest-performing single-card GPU on the market, by a rather significant margin. But here comes along ATI, with a whip the size of cruise-ship rope, ready to put NVIDIA back in their place.

The results here speak for themselves. The HD 4870 X2 offers incredible performance at higher resolutions, while the minimum FPS keeps right in line with our GTX 280.

I’ll reiterate that while I do wish I had HD 4870 performance data, I didn’t have a card on hand in order to accomplish testing in time for this article, unfortunately. Since NVIDIA’s leading GPU of the moment is the GTX 280, our main goal is to compare those two directly.