On the bottom of the keyboard, flanking the spacebar, are two shift keys. These work just like the keys on a desktop keyboard and allow you to use upper case letters. To the far right of the keyboard on the bottom, there is a small button with the entire top being dark gray. Think of this as a function button. If you want to use the â€œ@â€ symbol, you would simply press this button and then the â€œIâ€ key. Not much to it and it adds a lot of depth to the Treo as an emailing piece of hardware. 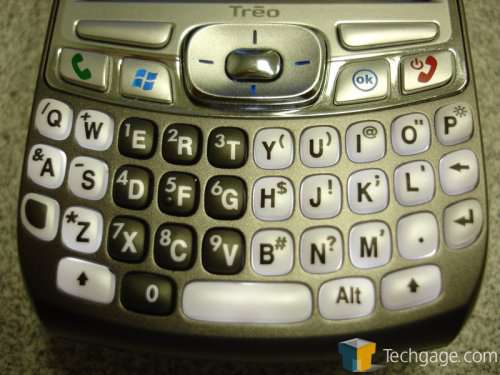 To give you an idea of what 240×240 really looks like, here is a quarter on the screen of the Treo. Ahh, the state of Wisconsin, known for their cattle, cheese and football (not shown.) 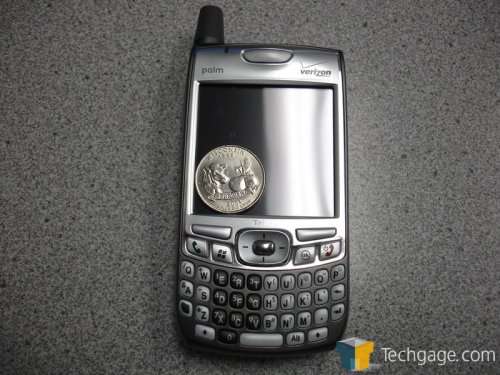 Moving away from the front of the Treo, the back of the smartphone is home to the Treoâ€™s 1.3 megapixel camera as well as the external speaker. If you notice, there is a small convex circle to the right of the camera itself. This is a self portrait mirror that allows you to get a good idea of the orientation of your picture should you be vain enough to take pictures of yourself. Directly below the camera is the speaker. This is where your ringtone will come out of as well as any audio that you might have your Treo play. 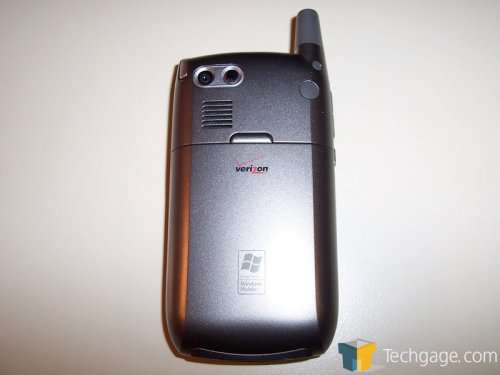 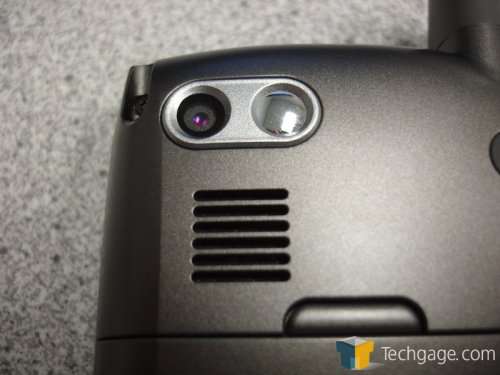 Under the camera and speaker, there is a door that covers up the battery. 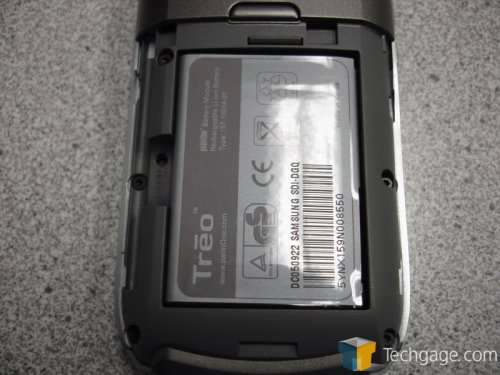 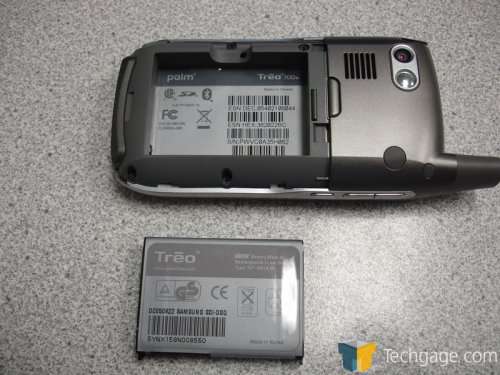 On the left side of the phone there are 3 buttons. The two that are together are for volume control. The bottom button can be programmed to do any number of commands. 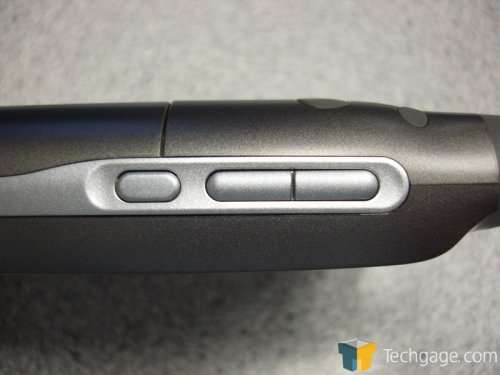 On the top of the Treo, there is a mute switch, an infrared port and interestingly enough, an SD flash disk slot. While the 700w comes with 128MB of internal memory, only 60MB of it is usable for the owner. Because 60MB can fill up fast these days, even on phones, the SD slot adds a lot to the overall package of the Treo. Accessed through Windows Mobile, the user can store music, pictures, videos or anything else that one can think of. 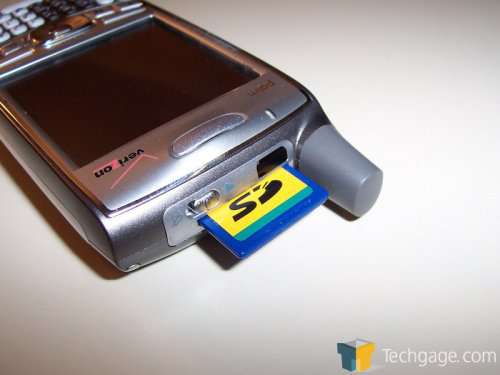 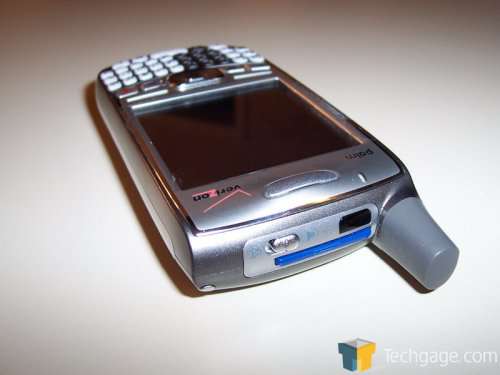 No smartphone is complete without its stylus. With this in mind, Palm provides not only a quality stylus, but a convenient place to store it away. Running down the left side of the Treo on the back side, the aluminum stylus is truly a solid piece of work. 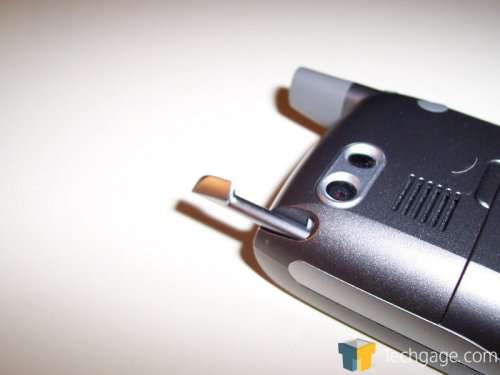 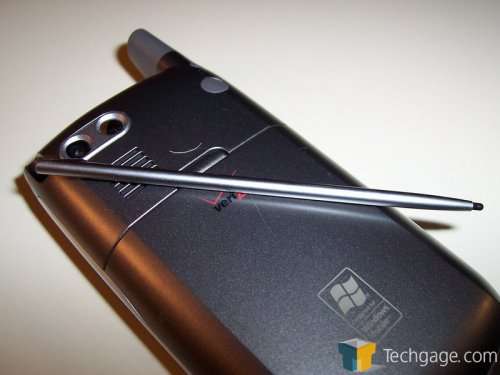 Before we get into the phone itself, letâ€™s take a look at exactly what we are looking at. Straight from Palm, here are the specs of the Treo 700w. 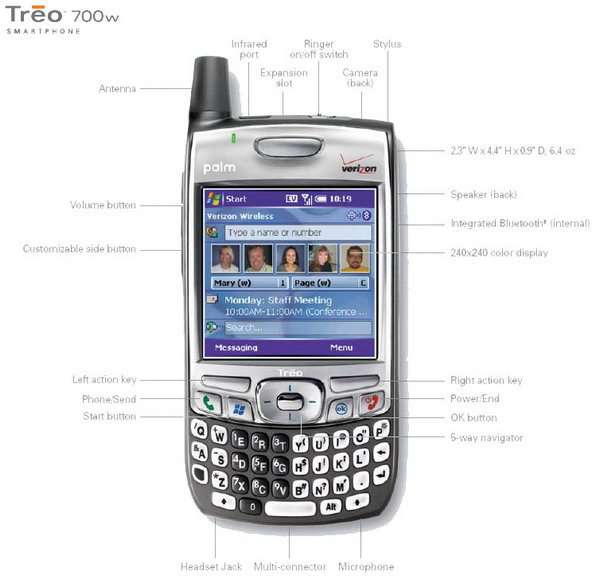 In all of those specifications, there are a few pieces that truly stand out to me. I am personally interested in the ability to sync the Treo with my PC and of course, the battery life needs to live up to the implied times in the spec sheet.

For those of you who are dedicated Treo users, you will notice that the 700w has a smaller screen than the older 650 Treo. While I have not worked with the 650 model, I have not had any problems with the display on the 700w. The colors are bright and ultimately the screen is easy to read.

Windows Mobile is far and away the feature that stands out the most on the 700w. With Windows Mobile comes Word, Excel and power point. Word and Excel work much the same way that the desktop versions while Power Point will allow you to go over a presentation before you have to present it. Working in IT with a background in sales, I can certainly appreciate Power Point on the go. With corporations in Palmâ€™s crosshairs, Outlook is the bread and butter of the Treo 700w. Using Verizonâ€™s mobile broadband, emails can be sent and received in real time, allowing seamless communication even when youâ€™re not at your desk. 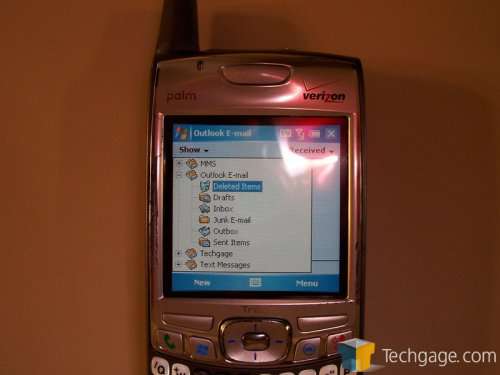 Another method of connecting to other people and devices is Bluetooth. Included with the 700w, Bluetooth allows the owner to use a Bluetooth hands-free headset should the provided wired headset not be enough. One last method of connecting to other people and devices is the Treoâ€™s built in infrared port. Something that the Treo isnâ€™t capable of is Wi-Fi. While not a huge downer, you will not be able to use the 700w as a mobile modem with Wi-Fi. It is documented however, that Palmâ€™s very own Wi-Fi card that fits nicely in the top SD slot. If Wi-Fi is a must, this is your only avenue to take and while itâ€™s not included in the package, itâ€™s nice to know that it can be done.

Another feature that desktop users might recognize is Microsoftâ€™s media player. Included is the Windows Mobile install, allowing users to listen to their MP3â€™s and watch videos that they might have stored on their flash card. The Treo 700w supports MP3, WMA and WMV, adding a bit of diversity to the 700w from a media standpoint.