The camera does as it should. It takes pictures on par with most other camera phones available today. 1.3MP isnâ€™t anything to really brag about but it does provide pictures clear enough to add to a phone book or a contact. I personally feel that cameras on phones are nothing more than a novelty at best. I learned this the hard way. I purchased a new camera phone back in the day when they were new because they were new. I got burned. I never used the camera mainly because the pictures sucked. I am not saying that the 700w took terrible pictures but if I am going to get something with a camera on it, I want to be able to take high quality pictures, not thumbnail material for my contact list.

Regardless, the 700w and its camera can take pictures at three different quality settings and five different resolutions. The settings are an original high, normal and low while the resolutions are 1280×1024, 640×480, 320×240, 240×180. While these arenâ€™t really anything to write home about, they do provide a decent enough picture quality at high settings for most people. Just please keep in mind that while 1280×1024 seems good; itâ€™s still just a camera phone taking the pictures.

The Treo isnâ€™t just limited to pictures either. Should you choose to do so, the 700w offers the ability to capture video. With just two resolution settings, 176×144 and 352×288, the phone wonâ€™t be capturing much but should be more than enough for all but the most demanding of users. When taking video, you can choose to limit the video length to 15 seconds, 30 seconds or unlimited. Unlimited will obviously take video until you run out of storage space. As stated earlier, the Treo 700w comes with 128MB of built in memory with only 60 of it being usable by the user. Not bad, but with high quality settings enabled, it can quickly fill up. Thank goodness for the expandable SD slot on the top of the phone. 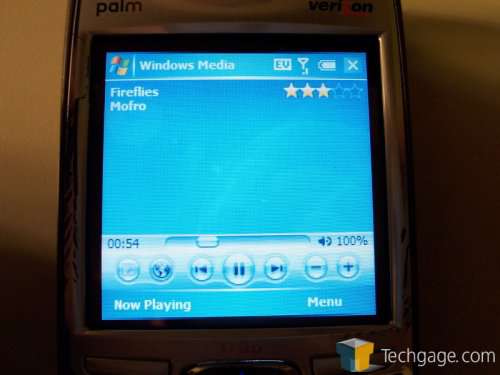 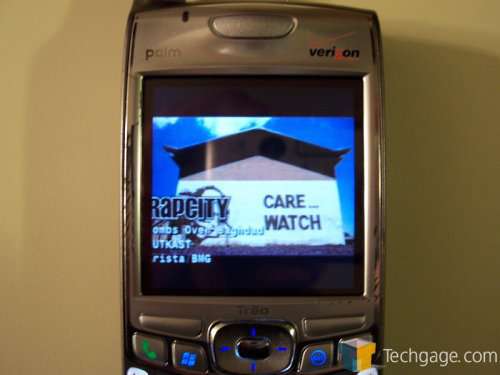 Obviously there arenâ€™t any benchmarks for phones and because of this, the testing results of the 700w come down to my own personal opinion. We would test the battery life, the reception in and around town as well as the quality of the media and software.

To start out with, I was interested in seeing just how long the battery could last. The Palm specs for the Treo are 5 hours talk time and more than 300 hours stand by. There really isnâ€™t a lot to do to test this out but actually use the phoneâ€¦ a lot. We found the battery life of the Treo 700w to meet the 5 hour listing for talk time. We had to recharge just shy of the 5th hour. To me, this is impressive considering what all the battery needs to power. We do feel however, that the 300+ hours standby is a bit optimistic. While impressive, we had to recharge the Treo 700w after roughly 267 hours. This is still well over 10 days of battery life if the Treo is not being used.

For call clarity and email, I did what anyone else would do to test out the services. I took the 700w with me to work, around on errands, working on the farmâ€¦everywhere. There is something to say when you can take a break from cutting wood in the middle of the woods and check your email on the company server. Some would argue that itâ€™s a burden to constantly be connected all the time and while I agree with this most of the time, to know that I can stay in contact with anyone and everyone is very nice. Call clarity wasnâ€™t anything to write home about, but it wasnâ€™t terrible either. For the most part, I can sum up the call clarity by calling it normal. Nothing special. It works so what more does one need to hear?

While I am not a phone, or smartphone, expert, I know what I need. I know what I want and what to look for in hardware. Coming off of using a Motorola RAZR, I can appreciate a decent phone. Size doesnâ€™t really matter much to me and as long as I donâ€™t get mistaken for Zack from Saved by the Bell, I really donâ€™t care how large a phone is. With the Treo 700w, the size is almost perfect. I was able to use the phone one handed while I was driving (we do not endorse that) and for almost all applications, one handed operation is enough to get through. Powered by an Intel XScale working at 312MHz, the Treo offers more than enough brawn for most anyoneâ€™s uses. There were times when the 700w would bog down a bit while playing a video but it was hardly noticeable.

Battery life was consistent with what Palm has claimed and the emailing features worked flawlessly. For anyone who is on the move, the Treo makes one hell of a companion. While not in any position to replace the notebook at the ultimate travel companion, the Treo takes the most necessary programs and puts them on a small phone that you can stick in your pocket if you so desire.

The aim of this review was not to score the Treo on our 10 point scale, but to rather present the phone to you, the readers and let you make up your own mind. While not perfect, the 700w does offer a great deal to those of us on the move that need to stay connected. The Treo 700w was a pleasure to work with and I feel that you would be smart to check one out if youâ€™re ever in the market for a smartphone.