You are Tommy, a native American set out to save your girlfriend and more importantly, the entire world. It is not going to be easy.. as long as the Keeper is around.

Reader Warning: This review has content and visual representations of the game that may not be appropriate for all readers. The game carries a Mature ESRB rating for Blood/Gore, Intense Violence, Partial Nudity and Strong Language. The article will reflect this, so please read with discretion.

Can it be true? Prey has finally seen the light of day? Yes, Prey has been in development for quite some time… even longer than Duke Nukem: Forever. Given the timeframe since early development, it would be hard to believe that 3D Realms would produce anything less than spectacular. Before we jump into conclusions though, let’s see what makes Prey one of the most unique FPS games on the market.

We took a look at the Prey demo a few weeks ago, and I walked away impressed. I was so impressed in fact, that I played through the demo twice before uninstalling it. Needless to say, I was highly anticipating the retail copy of the game. 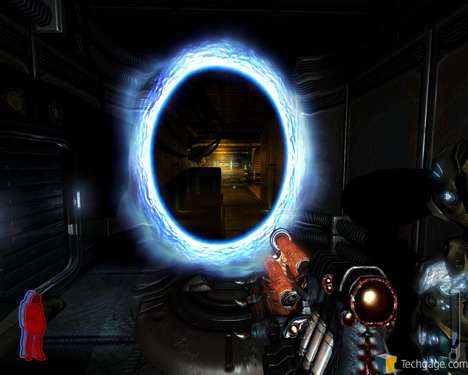 You are Tommy, a native American who truly does not give a rats ass about anything that has to do with his culture. He appears to be angry with himself, and this becomes evident at the very beginning of the game. Within no time, you are captured by an Alien race and are aboard this monolithic ship in the depths of space. Surprisingly though, you are not -that- far from Earth, as you can still see it if you get to an outside level.

Ok, another ‘save the world’ game. Prey attempts to add far more to the storyline than this simple concept though. Throughout the entire game, your girlfriend Jen is your primary focus… you want to save her from the grasp of the Keeper more than anything else… and you will not settle for anything less. As one would expect, you will run into countless traps and detours along the way to prolong your heroic effort.

One thing that Prey does well, is instill fear into the player. The alien world is so robust and detailed… it can be a very immersive experience. The game is based on the Doom III engine, so some core elements are evident, however the developers have gone the extra mile to hack the engine to deliver some interesting gameplay additions. 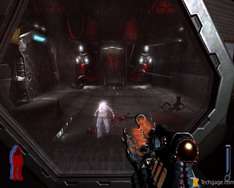 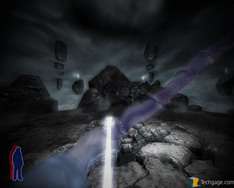 One of the biggest features of Prey is the portal system. Imagine walking along and finding a mirror like space portal hovering in front of you. If you look in, you can see that what’s through there, but it’s not what’s literally behind the physical portal. You can walk into any of these portals, and you will automatically appear in a completely new area. Sometimes these areas are continuations of the level, or could be a simple room with some ammo. The most common portals will have an orange ring around them, which monsters leave behind often. Other portals have a blue ring, and simply denote the end of the level.

Wall walks are another aspect that is rather unique. While they directly replace ladders, they don’t simply go straight up in the air. If you find a wall walk, you can follow it in any direction it leads, whether it be on the side or upside down. While walking along these paths, it really does feel like you are playing Descent, but are on foot. On some occasions I found it to be quite dizzying, but once you realize where you are and the true direction you are facing, you will be ok. There are a -lot- of these moments throughout the game though, so if you get dizzy easy, you may want to watch out. 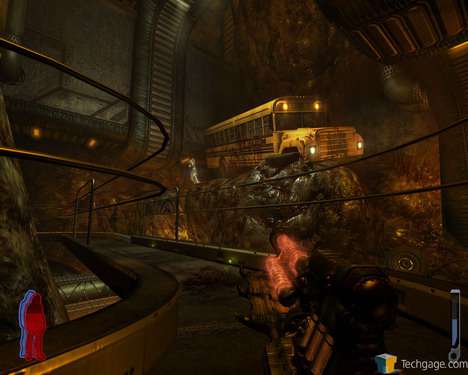 As if these two features were not enough to help Prey stand alone, they have also added a spirit mode. Because you are a Cherokee, you apparently have a few extra abilities instilled, which will be important to your survival. If you run into an area that Tommy is unable to proceed further through, such as a force field, your spirit can leave the physical body and continue through. You will be doing this quite often. Not only for force fields, but there are a lot of secret bridges that only your spirit will be able to see and use.

As an extension to your spirit mode… this game reinvents the way you die. Instead of getting owned and having to reload the level, if you run out of health you are immediately brought into a spirit world where you can shoot down blue and red spirits. You can sit back and just do nothing if you want, because you will be brought back to life regardless. However, the more spirits you kill while in this realm, the more health or spirit power will be restored when you are revived. After a while, I did find this a little tedious, especially in instances where I came here three times in five minutes, however I do believe this is far better than a standard death system. Because of how this functions, you will not face any load time whatsoever if you die. The only load time in the game is when you complete the entire level.

Your game will automatically save your progress as you continue through, both at a level start and at key points throughout a level. In total, there are over 40 of these autosaves throughout your journey.. approximately 10 – 15 minutes in between each. The game does do a great job of not halting progress though. 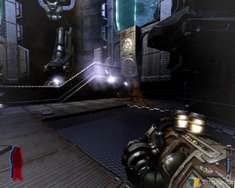 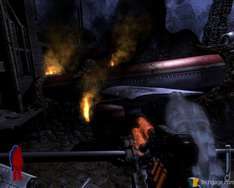 Another element that Prey wanted to focus on, was triggering emotion in the player. Throughout the game, you will see events that can make your hair stand on end. Seeing a small boy being shish kebobbed is one of these instances, but this is really just the beginning. To help the player become more immersed and feel what Tommy is feeling, he will occasionally bitch or whine about something. He freely and often drops the “f-bomb”, but if I was in his situation I can imagine I would be worse. “Wow, that was ****ed up! … No! THIS is ****ed up!”

Human Head has really gone the extra mile in the gameplay department though.. it’s rock solid. The game runs so fluidly and all of the events are streamlined well. Some aspects of the game are almost like playing a movie. Though I didn’t touch on transportation elements here, you will find yourself aboard a personal ship quite often. This just adds more credence to my Descent ponders.