To preface this page, I’d like to reiterate the fact that due to complications with our motherboard, we were unable to perform power consumption tests, or push the CPU higher with overclocking. We’re still investigating the reasons for various issues we ran into, but we’re leaning towards the fact that our board sample is less-than-ideal. The issues experienced wouldn’t affect performance results, but would affect overclocking and power-consumption tests.

That said, it’s fairly easy to be a little excited about AMD’s X6 processors, and it’s not because they blow away the competition, since that’s not the case at all. Many Intel processors beat our 1090T time and time again, but the difference again comes down to price. Intel’s six-core monster is $999, and another common conqueror, the Core i7-870, retails for well over $500. All the while, the 1090T is for sale right now for $300 – $310.

Even better, if you own an AM2+ or AM3 motherboard already, you can still continue to use the same board, which saves you even more money. All you need to do is make absolute certain that your particular board features a BIOS update that will allow recognition of the CPU’s. And while we weren’t able to test for power consumption, given the 125W TDP we’d assume that the power draw would be only slightly worse than a 965 Black Edition. 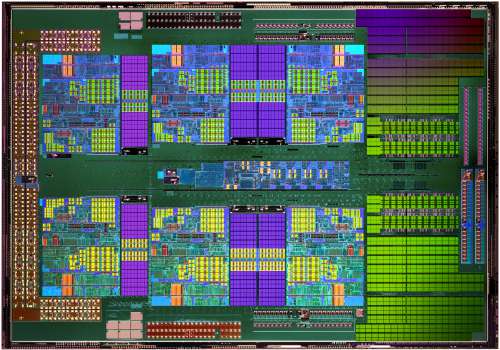 The best part of AMD’s X6 processors is the fact that six-core processors are now available to almost everyone, as even the 1055T retails for a modest $199. Given that Intel’s only six-core option is a $999 one, having models that many others can take advantage of is a great thing. The 1090T might not be the fastest CPU around, but it does have a lot going for it.

One thing I did notice, though, is that AMD’s Turbo CORE feature isn’t quite as effective as Intel’s TURBO. Though the 1090T was meant to hit 3.60GHz on up to three cores at a time, no matter what I did could make that happen on a consistent basis. This is in contrast to any Turbo-supported Intel CPU, where it’s easy to keep a core or two pegged to its top-end value.

But that’s a minor point in the grand scheme. AMD’s Phenom II processors are hardly a plain offering, and the six-core models only sweeten the deal for a new system build. As seen in our results, it performs extremely competitively with Intel’s current offerings, only really falling behind in arithmetic-based tests.

One thing that may have helped AMD’s X6 offerings become even more competitive could have been the introduction of a HyperThreading-like feature. It’s evidenced in various points in our results that HT can indeed make substantial improvements in certain scenarios, so in that regard it’s rather important. Currently, Intel offers HT support on almost its entire line-up. To me, it almost seems like AMD needs an HT solution to remain competitive, because it’s clear Intel has no intention of dropping its support of the technology soon (and why would it?).

When all said and done, though, AMD has delivered a lot of good here. The 1090T is fast, and proves itself to be a great value when compared to Intel’s ~$500 Core i7-870. Plus, it’s completely backward-compatible with a motherboard you may already have, which is a nice perk.

It’s worth noting, though, that if you are not a heavy multi-tasking user, and don’t regularly run tasks that take advantage of multiple threads, then chances are the X6 is actually too much CPU for you. There are many more options out there, dual or quad, that will likely suffice. I think it’s safe to say that for quad-core and up, power users will be the ones to reap the rewards of all the cores.