Rather than simply release its six-core processor and be done with it. AMD has followed-up to its last-month launch of the 890GX chipset with the introduction of 890FX. This is AMD’s enthusiast chipset and improves upon the GX with improved PCI-Express bandwidth, additional PCI-Express slot capabilities and the addition of improved memory management, called IOMMU (I/O Memory Management Unit).

To put things into perspective, you can see a simple table below that shows the differences between the 890FX, 890GX and 870 chipsets:

All three chipsets support SATA 6Gbit/s, which is great to see, and all also support AMD’s OverDrive utility, which was to be expected. Interestingly, AMD also boasts the fact that for overclocking, the 890FX is the best, while the 870 is merely “Good”. I’m not quite sure of the real-world differences that will be seen, but it’s interesting that AMD categorizes each chipset in this manner.

I’m not going to talk too much about the new chipset in this article, but I honestly believe few people are going to appreciate exactly what the 890FX offers over the 890GX. If you are content with less-than-outrageous overclocking, and don’t plan on running dual-GPU, the 890GX will suit you fine. But like the 890GX launch last month, there are many 890FX boards that are soon to hit the market, including MSI’s 890FXA-UD70: 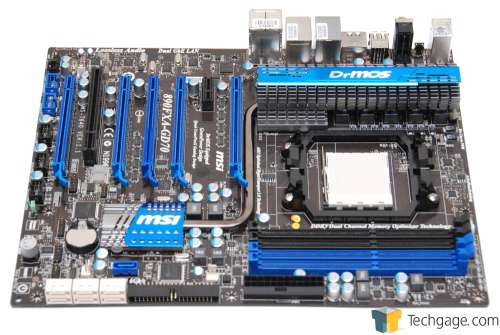 This is the first MSI board I’ve touched in a while, and overall I’m quite impressed. The board layout is nice, and so is the color scheme (I can always go for some black and blue, as long as it’s not anywhere on my body). There is a plethora of PCI-E x16-sized slots and also a single x1 slot and legacy PCI slot. The DIMM slots also have something we’ve come to see on ASUS boards in the past year, with the secure tabs on only one side.

Feature-wise, the 890FXA-UD70 includes support for both USB 3.0 and SATA 3.0 devices, which is a huge plus, and also “Core Unlocking” – a feature that many motherboard manufacturers (especially ASUS) are touting lately. If you look at the large version of the photo above, you can see that in the bottom right-hand corner, there are buttons that aren’t really buttons at all.

When I first saw these, I said, “Hmm, that’s odd… is this board a prototype?”, because yes, on occasion, I do talk to myself. Lo and behold, though, this wasn’t a prototype, and despite those “buttons” being completely flush with the board, they respond to your touch just fine. I actually find this very cool because it keeps the board looking more streamlined. Aside from color, MSI doesn’t seem to care as much about bling (and that’s fine by me).

There are many, many other features that are worth noting, but for the sake of time, I’ll talk about those at a later time, as I’d like to take a look at this board, and other 890FX offerings, more in the future.

Along with the six-core processors, AMD updated its OverDrive application to support the Turbo CORE mode, and currently, this is the only proper way to monitor the effects of Turbo on X6 processors. Over time, OverDrive has become an incredible all-in-one tool for both overclocking and monitoring, and in some recent version (I’m unsure which), it even added a robust logging tool, so that you can keep track of things not only live, but over a long period of time, which is very important when pushing huge overclocks.

As you can see in the shot below, the basic status monitor gives us an overview look of all six cores, and with Turbo CORE active, the first three have risen beyond stock speed, while the other three remain idle. 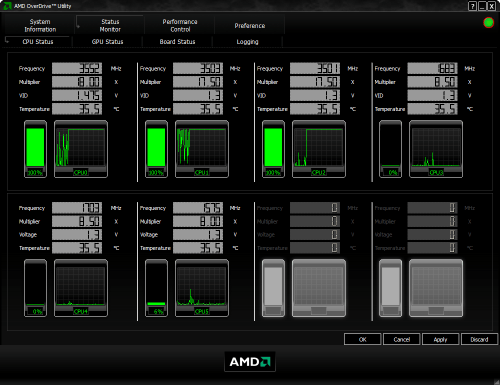 If you turn on Advanced Mode and head to the Clock/Voltage section, you get even more information, not to mention instant-access overclocking controls. You can once again see on the left side that Turbo CORE is indeed active, while being clear about its “Target Value”, which on the 1090T is 3.60GHz. 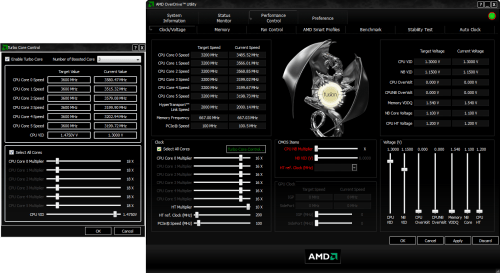 Unfortunately, due to some issues we had with our motherboard (still investigating, but the issues we experience are claimed to not be normal), we weren’t aren’t to perform any overclocking. We’ll tackle it in the future, though, after we acquire a better CPU cooler and a fresh copy of the board (after we rule out that it is a faulty sample).