As 24″ monitors invade our homes, it’s important to make the right purchasing decision. What matters most? Lots of features, better image quality or the best gaming experience? We are taking a look at Planar’s latest 24″ model to see where it excels… and where it doesn’t.

Consumers are given a lot of choice when buying monitors today. Naturally, as technology advances, prices fall. Almost anyone can pick up a monitor upwards of 24″ for $300 at their local big box store. The problem that presents itself though, is the quality of what you’re buying in the store and setting on your desk.

The industry is moving towards an interesting correlation where size matters, but nearly everything else is set aside. A Joe who walks into a store and sees shelves full of huge monitors staring in his face has a hard time resisting pulling out a credit card. It’s hard to resist. Unfortunately for the rest of us, this means we are left searching through a pile to fine a decent display that some crazed company has kept in production while everyone else is leaning towards marketing to the lowest common denominator.

The sad fact is people don’t know quality. I cringe when I go to someone’s house with a gigantic HDTV only to realize they have the picture settings plain wrong, or worse, they’re using composite cables for “HD”.

The same principle lies with computer monitors, with one distinction: people who buy them are never given the chance to screw it up, for the most part. Even though I view using VGA cables a crime, it’s no where near as bad as some of the home theater examples I can give.

The fact is, most displays are a waste of time, and the ones that aren’t are sold at a price point most consumers aren’t willing to pay. So even if you wanted to buy one, less and less consumer-level monitors that favor performance over value are being produced. Yes, there’s the “really high end” market (and that’s the technical term), but those sell for -a lot- more the sub-$1000, or even sub-$2000 monitors we’re used to.

24-inch monitors have recently become a popular choice with enthusiasts and regular Joes because they offer (what some would consider, unless you’re eyeing one of those 30″ behemoths) a more than suitable gaming experience and increased productivity. Who wouldn’t love the perks of gaming at 1920×1200 and being able to load two spreadsheets side-by-side?

Two months ago, Planar formally announced their new 24″ monitor, the PX2411W. Though it’s set to compete feature-wise with monitors like the Dell’s new E248WFP, interestingly enough it’s priced closer to Dell’s 2407WFP. Some numbers look promising, like a promised 1000:1 contrast ratio, 6ms response time and 178° viewing angle, which hints that it may be a P-MVA panel, compared to cheaper displays like the E248WFP which have TN panels that offer inferior viewing angles and color representation.

We’ve only reviewed a handful of monitors in the past, and we’re hoping for that to change. If you have any comments or suggestions, please comment in our forums. A link to a registration-free page for comments can be found in the last page or the article.

The 2411W’s bezel is a standard black with no fuss. First impressions were merely so-so; it isn’t ugly in my opinion, but it’s not going to win any contests. Planar could have gotten more creative considering what designs Dell, Samsung, Acer and Apple have come up with, for instance. It’s boring to look at by comparison. 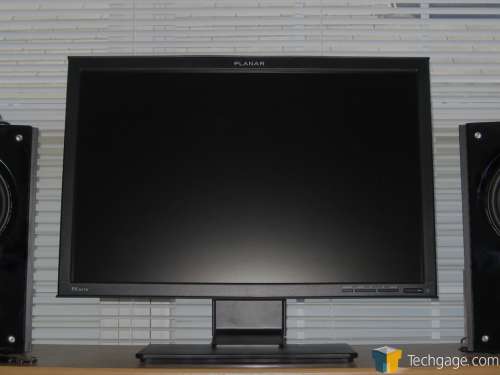 The black finish maintains the simple aesthetic. The clip close to the bottom is an accessory for the mechanism that keeps the display locked in place. 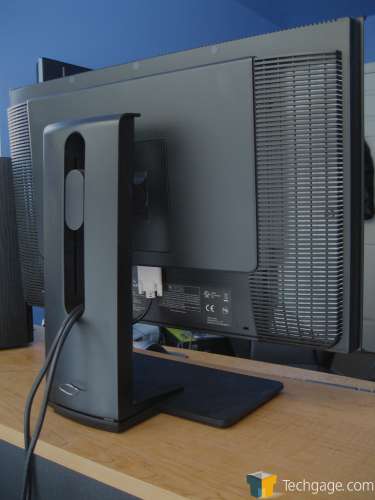 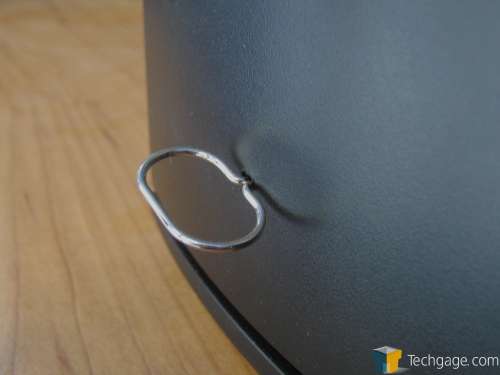 The controls are located on the bottom-right of the display. The buttons are, from right to left, the power, menu, right and left, auto and a source button. Most of them are self-explanatory, but pressing the auto button scans your analog connection to (hopefully) scale it properly to the monitor, while the source button switches between the two. 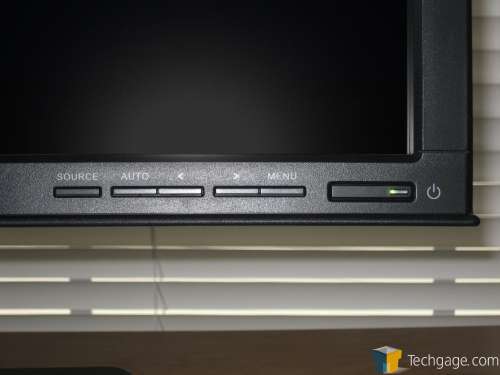 Unfortunately, you won’t find many connections on this monitor. You’re left with the meager offering of a VGA and DVI. There are no component, composite or HDMI inputs, and no extra features like a USB hub or card reader that we’ve come to find on other monitors. Out of everything omitted, I have to say I miss the composite inputs and USB connections the most, and there is little excuse Planar can give to dismiss their absence.

The stand is rather basic. The only capability is has it adjusting the height, meaning it cannot swivel or rotate. Since the entire stand is rectangular, it takes up a good portion of the available desk space under the display, stretching out for 9 ½ -inches.

I can’t say first impressions of the monitor disappoint, especially for someone who hasn’t use a 24″ monitor full time, but I can’t say they blew me away either. At first glance the matte panel delivers decent quality, so we’ll see how it performs in the next section.