PlanetSide 2 is set 300 years in the future. The Earth is on the brink of geological ruin from centuries of war. Under this global threat the world unites under the Terran Republic (TR); shortly after its formation there was a great and species-altering discovery made – a wormhole. This wormhole led to a new terrestrial planet which became known as Auraxis, where many technological treasures had been found, left behind by a race only known as the Vanu.

The Vanu’s technology made many impossible ideas now possible, including immortality. The technology was on its way back to Earth when the wormhole mysteriously collapsed, just as quickly as it had appeared. The local TR government of Auraxis started to fear there would be a global panic with limited resources and no way to reach Earth. This new-found fear gave rise too many new restrictions on the TR citizens, thus leading to civil unrest planet-wide, causing two other factions to rise up: The New Conglomerate (NC) and The Vanu Sovereignty (VS).

The NC believe that they are liberating all of humanity from the oppressive TR and the VS believe they are following a manifest destiny to further the human race with alien technology. These factions are in a never-ending battle to control the many natural and technological resources that are available on Auraxis. This is where your story begins; does your loyalty lie with the TR, NC or the VS in this never-ending conflict PlanetSide? 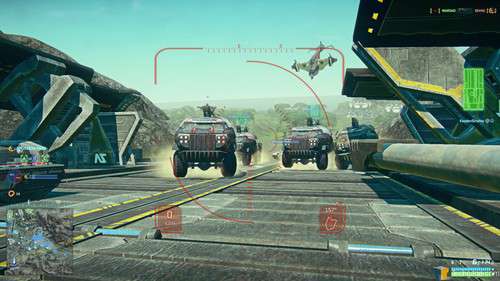 The original PlanetSide game didn’t involve players too much in the story and neither does this sequel. In fact, the game just lets you choose your faction with a quick synopsis of the faction you have selected, then you choose a server, a name, a face and then are dropped right into your first battle. That’s the end of the story right there. This is also a little harsh for newcomers; you are dropped right into battle and you almost always die within a few seconds because you have no sense of what is going on aside from fighting or where you are.

When you die, you will be given a place at which to spawn; I really recommend you head for your faction’s Warpgate area to get familiar with the world and what it has to offer. The first thing you will notice is the size of the continent; there are a total of three and they are eight-by-eight kilometer (four-by-four mile) in size with literally hundreds of players per faction, per continent on one server.

Now, PlanetSide 2 wouldn’t be much fun if everyone was the same class and only had one vehicle – fear not. PlanetSide 2 offers many variations of six primary classes which are Infiltrator, Light Assault, Combat Medic, Engineer, Heavy Assault and MAX. The player can choose what class he/she wants to be at anytime; you’re not locked into any one class at any time. There are also varying weapon loadouts that you can unlock; I will talk about the cert system later, just know that not all weapons are available for all classes but there are many add-ons and weapons you can unlock with each class that will keep you busy for a long time. 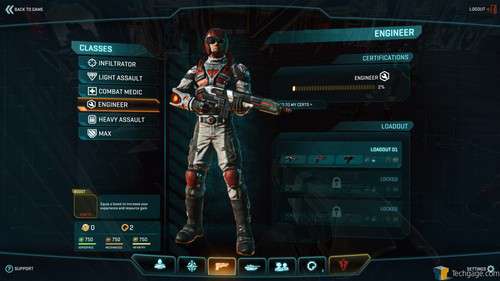 These classes, vehicles and aircraft can be outfitted in any number of ways because of the Certification Point (cert points) system. These unique points are awarded after earning kills, healing someone, repairing something, leveling up your Battle Rank (player level) and etc. This is the main grind of PlanetSide 2; while cert points can be earned for playing it takes several thousand to fully unlock a full set of skills, systems, support gear and weapons.

There is a way to lower the grind by unlocking these items with Station Cash (SC) which can be obtained with real-world cash. But, this only unlocks the item; to increase its abilities you have to use cert points, which can only be gained by playing PlanetSide 2. This keeps the “pay-to-win” element at bay while letting those who can afford it to get a little boost and a chance to get ahead of the game or catch up. 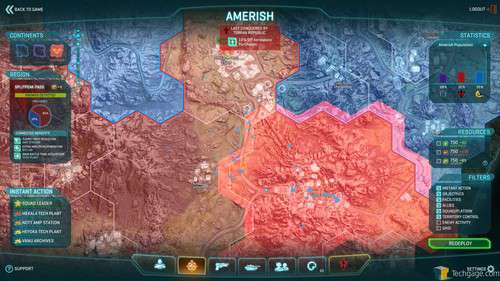 The final gameplay mechanics seen in PlanetSide 2 is the Timer and Resource Systems. The Resource System comes in three subsets with Aerospace, Mechanized and Infantry – this is the purchasing system meant to balance the deployment of the MAX suit, aircraft, vehicles and grenades. The Timer System is an extension of this by forcing a minimum time at which you can obtain a Max suit, aircraft and vehicle; the grenades have no limitation on how many can be purchased or how often.

The amount of territory controlled by your faction on the continent you are on will change the rate at which these resources are gained. The MAX suit and grenades are governed by the Infantry, while Aerospace is the aircraft and the Mechanized is the vehicles. These all take a certain time to regenerate, except for grenades, so make sure you’re properly supported when you head into combat or you might be on foot most of the time.

This is obviously an epic world and you would think it would require a subscription to enjoy it – but no! PlanetSide 2 is 100% free-to-play. Aside from the Station Cash mentioned before, there is no requirement for a subscription, but it doesn’t mean there isn’t an option for it. The base subscription is $15; if you get the Sony All Access, it’s $20, but that gives you access to almost all Sony Online Entertainment (SOE) games. The subscription will give a boost to your XP, cert points and resource generation based on how many months the sub is active. It will also give you priority login, access to cosmetic items before anyone else and 500 SC each month; a $5 value. The subscription feels a little weak in my opinion; I think Sony could do more for those who subscribe, so I would recommend anyone who plays any other SOE game to consider the All Access instead of a solo subscription.