If I had to compare PlanetSide 2 to another game on the market it would be Battlefield 3, but this game is on a much larger scale, features more resource management and has less-destructible environments. I have been playing TR exclusively during the review and I have to say that I am quite impressed with what SOE has put together here, but this doesn’t mean this game is perfect by any means. There is much that still needs to be done in the way of balancing, bug-fixing, reports of crashing to desktop and advanced features.

I am not going to go much into balancing issues, mainly because I have only played one faction and can’t say for sure where problems lay because every side has a complaint one way or another – as is to be expected with any MMO. I will just touch on something I know a lot about: aircraft. I know that a bomber, like the Liberator, should be able to fly higher, be somewhat stealthy and be able to hit their target with some distance and none of that is here by default. This is further compounded by the fact it doesn’t take much to shoot down a vanilla Liberator because you have to get so close to your target and it only takes a low number of hits from flak or anti-air to bring you down. The rear turret gun is also useless on the Liberator. All of the aircraft can strafe up or down and when a fighter gets on your tail, all they need to is just strafe up and they are suddenly out of range because the turret only points down to the ground. 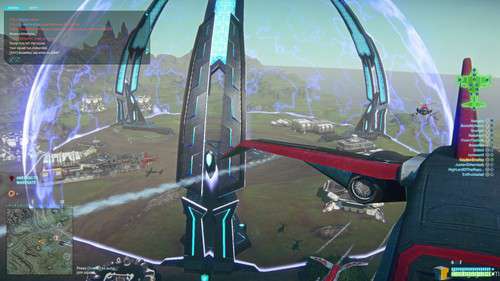 Some of these problems could be because I don’t have all or a majority of the upgrades unlocked for the Liberator but there should be an advantage to this unit’s range for it being primarily a bomber at the very least and since there isn’t, it’s practically useless until you can spend a few thousand of your cert points on it. The Galaxy is massive and should be able to transport a single light tank at least, but it cannot. To be clear, many of these complaints were features that were present in the original PlanetSide but they have been cut from this sequel and it feels like the advantage now lies with massive numbers of fighter aircraft rather than with skill and knowing how to operate within your aircraft’s default strengths and weaknesses.

PlanetSide 2 is epically huge and your PC must be able to keep up with its ambitious goals. Thus, the system requirements are beefy; it is recommended you run a Intel i5 / AMD Phenom II X6 or higher CPU and the minimal should be no less than Intel Core 2 Duo E6850 / AMD Phenom II X2. The video card is just as robust with a minimum requirement of an NVIDIA GeForce 8600 series / AMD or ATI 4850 series or higher. This isn’t something I normally include in a review but this could be a tremendous burden for some of our reader’s systems and I thought it would be prudent to include it.

The game’s graphics are not something I have been over the moon with. The most notable reasons are that the majority of the world/vehicle textures are low resolution and there are frequent pop-ins at short distances for high-detail items like player helmets. I did learn that by reducing the draw distance to 85%, it helps alleviate the frequency of this. There obviously had to be some sacrificing that needed to be done and these are pretty minor when you consider what is happening around you and all of the data the server is sending back and forth. There were times I crashed to desktop or it was unplayable because the textures totally disappeared, forcing a restart of the game; it is unclear where the culprit lays but it has happened less frequently when I moved the game to my SSD. The upside is that this only happened after about 3 or more hours of playing, but these same problems have happened to others that I have been playing with. 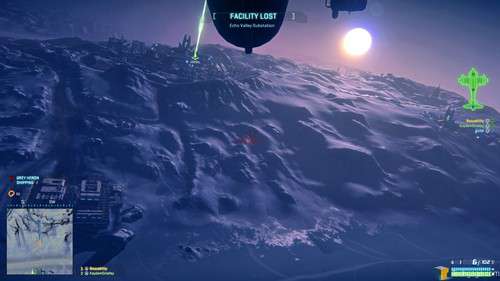 I am very disappointed to report that PlanetSide 2 does not support multi-monitor. The game runs MM resolutions no problem, but the Field of View (FOV) and the game menus are unacceptably broken. During this review, I was banned for using a program called “Flawless Widescreen” to fix the FOV for my character and for some reason this was a violation of the terms of use; to say I was upset was an understatement. I did contact Sony support and was told that it’d be adding support for multi-monitor and that it would unlock my account, which happened in a span of 12 hours. I looked further into the issue and found that SOE wants the FOV to be restricted in vehicles, and using this fix prevented that. With how the FOV fix worked, it was flagged as a hack, so I understand SOE’s stance on the ban and I am just thankful there are no hard feelings from SOE about it. I do not recommend anyone use a FOV fix for any reason – especially with official support for multi-monitor coming soon.

The sound effects team at SOE must of had a monstrous job putting all these sounds together. They are clear and vibrant, but when I got into a massive battle – and I mean 100+ at least – the game would cut some sounds out abruptly, but the rest of the time I had no issue. The music isn’t very memorable; it’s not over-bearing and doesn’t cut into the VOIP communications either.

The servers do suffer from some stability and performance issues unfortunately. There have been several times I have seen someone in my group stopped at a terminal but still saw them walking forward. There are times in combat where opponents teleport around in front of me; this can be quite disorientating and has lead to my death or just nothing happening. Then there are other times where I’ve been firing and have seen my opponent take the hits from the bullet-hit animation but the kill screen show they are still at a very high health. These events happened in a highly-populated area and while some are more frequent then others, it is frustrating to have it happen at all. I do realize that this is free-to-play, but if I had to pay and had to have a monthly subscription, I would be infuriated. This is a problem I know the developers are actively working on because I have seen it with less frequency since I started playing and it was confirmed by a contact at Sony and in the patch notes. 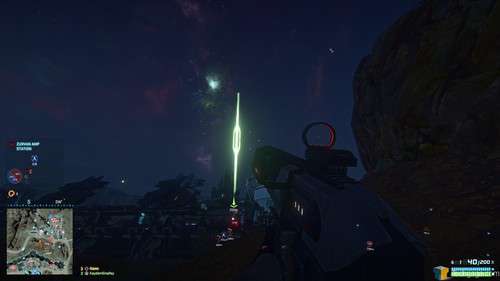 I have put several dozens of hours into PlanetSide 2 and I plan to put many more. The best experiences so far have been with friends in a squad and not worrying about anything but just having fun. The hours just melted away, and that hasn’t happened to me in a long time. I do have to admit getting a max squad of 12 makes it a little hard to fill up but since it’s free-to-play it isn’t hard to attract new friends to it. I do realize that SOE has its work cut out to fine-tune it on many levels, but honestly this is a free-to-play game and it is more reliable than other games that I have paid for requiring an online component one way or another, so I am willing to give SOE some time to work it all out and just ignore some of these problems for a little while at least.

In the end, PlanetSide 2 redefines what a MMOFPS can and should be, and it being free to play just makes it even that much more appealing. The only problem is that PlanetSide 2 has stalled a little out of the gate with all these cumulative issues from launch. Thus if Sony wants this to become a smash hit, it will need to work very hard to resolve these issues in a very short time for it to be a stellar experience for everyone playing it within the next few weeks.