To kick things off, we’ll take a look at the simplest section PlayClaw offers, “Screenshots”. Here, you can choose a folder to output images to, the hotkey to activate the capture, and of course, the format. Like FRAPS, the available formats include PNG, BMP, JPG and TGA. Because I’m a bit obsessive with both picture and video quality, I personally always stick with PNG, as it’s about as lossless as it gets. The downside to that format is filesize, at about 3MB per image at 1920×1200, so if you are not quite as fussy as I am, you could always choose to use JPG and adjust the compression level to your liking.

When a screenshot capture is activated in a game while running FRAPS, the FPS counter in the corner will flash once, or if there is no FPS counter, there will be no confirmation at all – until you look at your output folder after exiting the game. The way PlayClaw captures screenshots is a little more obvious, as a large red see-through box highlights the entire screen and shrinks inward towards the center to ultimately disappear. This sounds like a bizarre method of confirmation, but as the animation takes much less than a second to perform, it’s actually rather seamless, and after using PlayClaw for the past couple of weeks, I have to say I prefer it this way. Because this red box is an overlay, it will not appear in any screenshots, even if you were to rapid-tap the hotkey. 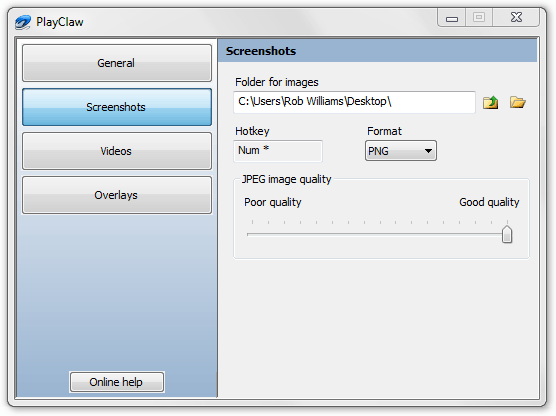 One of the more common uses of PlayClaw will of course be the video capture feature, so it’s no surprise to see many more options available here. Once again, you can choose where to output the files to, and as we look at the hotkeys section, we can begin to see one benefit PlayClaw has over FRAPS. Not only does the software allow you to start and stop the recording as you wish, but you can also pause and cancel it – two very nice perks. The cancel feature would be especially useful for machinima artists who tend to re-take the same scene over and over. Being able to cancel the recording saves the hassle of having to exit the game to delete the file or files.

Also in this same “Videos” pane, the “Number of cores to use” option is without question the most notable. As mentioned in the intro, PlayClaw is a multi-threaded application and is designed to use as many threads (or cores) that you want to designate for the purpose. In the case of my Core i7 quad-core processor, I have eight threads in total, so for the sake of making sure my OS and game have ample CPU power to get by, I only dedicated half of it to PlayClaw to record video. 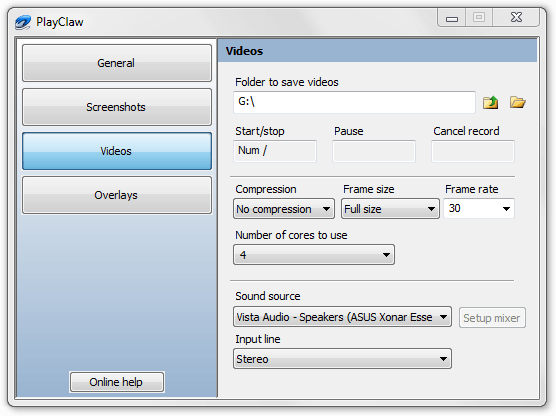 The optimal setting here will vary depending on the purpose and on your machine. If your PC sports a similar processor as mine, but you’re playing a game that’s also heavily multi-threaded, you may wish to back this option down to 2. If the game you’re playing is trying to use more than 2 full cores (or 4 threads), you may run into a performance issue. Throughout all of my testing, I never once changed this option and didn’t have an issue, but again, depending on many different factors, you may have to tweak a little.

One thing I’ll note is that if you are using an older or lower-end processor, the number of cores you select is going to become even more important in order to retain good playability in a game. If your PC is equipped with a Core 2 Duo dual-core, your only real option is 1, as choosing 2 will undoubtedly result in harsh gameplay and an equally harsh recording experience. Regardless of your setup, I’d recommend setting the number of cores (or threads) to half of what’s available from your processor, then tweak further if the need arises.

Continuing along the road of performance concern, PlayClaw shines with another perk… the ability to choose from between three different levels of compression. As the screenshot shows, the program offers the option to use no compression at all, low compression and then high compression. Just like how the number of cores you choose will depend on various circumstances, so will the compression.

I mentioned above that I’m a bit of a stickler for lossless quality, so for that reason I chose to run with no compression throughout the majority of my testing. Theoretically, this is the most intensive method of recording from a storage standpoint, because the raw data being written to the hard disk is going to be much, much higher than either of the two compression levels. But on the other hand, this type of recording doesn’t seem to nail the CPU quite as hard as the others, because when using a compression level, your CPU is essentially compressing on the fly, whereas with no compression, it’s simply being written to the disk as fast as possible.

To FRAPS’ credit, the program also offers a no compression option, but in all of my tests, is has the ability to slow down or throttle gameplay to a much more noticeable degree than via the default option. This of course will depend on numerous factors, such as resolution and your PC’s hardware. If you’re recording a game at 720p and have a high-end PC, chances are the lossless method with FRAPS won’t be as troublesome as it would be using higher resolutions.

The final sub-menu in PlayClaw is where things get a little interesting, as there are a couple of features not currently seen in FRAPS. Like FRAPS, PlayClaw is able to display a framerate counter on the screen during your gameplay, but in addition, it can also show video information (recording-wise), GPU temperatures and even Teamspeak/Ventrilo overlays. 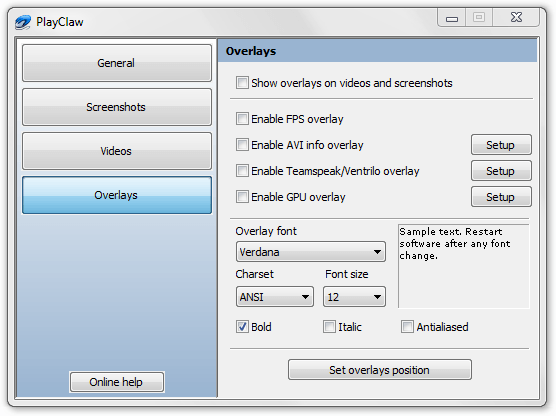 As I mentioned earlier, while FRAPS offers the ability to record framerates across your gameplay and export the data into reports, PlayClaw doesn’t. Instead, the only option is to have the framerate displayed in the corner to use more as a guideline or for testing purposes where reports (and ultimately, graphs) are not needed.

For clan gamers, the Teamspeak/Ventrilo overlay is going to be one of the most useful features that PlayClaw offers, but as I unfortunately don’t ever use either of those applications, I didn’t test it out. Essentially what it does is monitor your friend’s list from either of those applications, and then overlays that information inside of your games. For example, if you’re in a chat with a couple of friends, their names would be listed to the side of the screen, and icons would appear beside them based on their activity, mostly to denote whether they are talking or not. This feature also monitors people who leave and join the chats as well, so it’s almost just as good as having full access to the applications themselves.

Believe it or not, this feature alone is so popular, that the developer released a completely separate application for it called VoipOverlay, one that costs half the price of PlayClaw, but lacks video recording, snapshot taking, and the other non-Teamspeak/Ventrilo overlays. Both PlayClaw and VoipOverlay allow you to customize where each one of the overlays situates on your screen, which can be an important feature if some game you’re playing has an intrusive or oddball GUI. 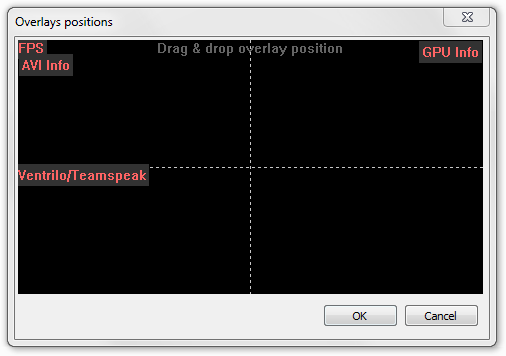 Overall, PlayClaw as a whole looks like a rather simple application, and aesthetically, FRAPS looks a bit better to me, but that might depend on your personal tastes. Of course, it’s not looks that matter (your mom should have told you that!), so let’s see if PlayClaw lives up to all of its claims.