When I downloaded PlayClaw to test it out, I wasn’t sure what to expect. Who could blame me? FRAPS has been around for longer than I can even remember, and most often when people want to investigate recording game video, that name is one that comes up 99% of the time, with the leading alternative being the usage of another PC to do the dirty work. That’s obviously much more complicated.

Over the past two weeks, I’ve taken full advantage of PlayClaw’s recording feature, and as it stands, I wholeheartedly recommend it to anyone who needs a reliable tool for that purpose. As I mentioned earlier, the process of recording with PlayClaw is 98% of the time not even noticeable, while it is noticeable 98% of the time with FRAPS.

I should stress, though, that the lone resolutions I tested both applications with was 1920×1200 and 1920×1080. I am well aware that FRAPS does a great job of recording games at resolutions lower than this, but in today’s 1080p world, users today expect a bit more.

One thing I didn’t touch up on much was video quality, but that’s because I didn’t see anything lacking. With PlayClaw, you’re going to get great video quality that’s competitive with FRAPS, even when compressed. And uncompressed, well, there shouldn’t be much of a difference at all, and in personal tests of comparing videos side-by-side, videos produced with both applications looked identical. One just happened to be jerkier in parts than others. 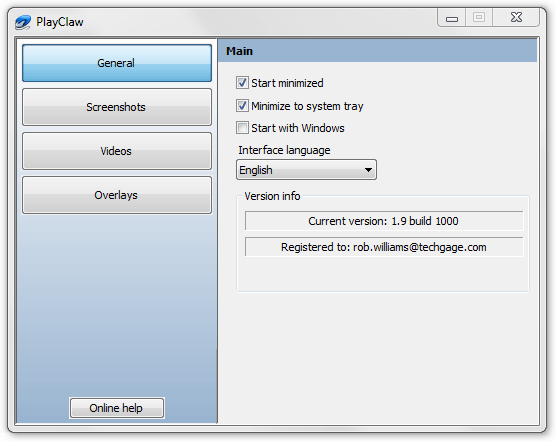 I couldn’t possibly wrap up this review without highlighting a couple of the features that FRAPS has that PlayClaw doesn’t, though. The most notable for me would have to be the lack of benchmarking reports – that is, to push a button and have the program fully monitor the framerate until you push it again. Also, FRAPS recently introduced a neat feature that allows you to pre-record 20 seconds of video at all times, which makes sure you will never miss that perfect capture, and lastly, it also includes the ability to monitor the Windows desktop (DWM), which can be a nice feature in some cases (such as for creating tutorials for friends or to post on the Web).

PlayClaw’s Edward Kozadaev told me that the program will have similar functionality as mentioned above in the future, in addition to some other features that FRAPS doesn’t currently offer. Of course, those were not disclosed to me, and understandably so. On the other hand, PlayClaw offers a cool Teamspeak/Ventrilo feature that FRAPS doesn’t, and for hardcore online gamers, that feature might be even more appreciated than the video recording.

One of the best things about PlayClaw might be the fact that the developer offers a free trial to anyone who wants to give the program a try. That’s right… you don’t have to simply go by what I say, but rather give the program a try yourself and discover its advantages. Speaking of trials, the licensing agreement for PlayClaw is fairly similar to FRAPS. It costs $30 to register, and only “major” versions could require an upgrade fee. By major, the developer refers to a vast overaul (think XP < Vista). FRAPS’ licensing is a tad different, as it costs more up-front, at $37, but promises free upgrades for life.

Whichever application is better for you is going to be a matter of opinion, and based on your needs. Since both FRAPS and PlayClaw offer free trials (primarily with the caveat of forced watermarks), you can easily test out both and see which better fits you. And if you have any questions, or believe I missed an important detail in this review, please feel free to post it in our thread, as we’d love to hear from you.

That all said, game (record) on!

For the week following this review, we’re holding a simple contest in our forums that will give you the chance at winning one of three registered licenses for PlayClaw, courtesy of the software’s developer, Sytexis Software. To enter, sign up for our forums (if not already, required for e-mail verfication) and answer the simple question in the related thread, “What feature would you like to see added to PlayClaw in the future?“. Do this, and you’ll be automatically entered. We’ll perform our random drawing next Thursday, July 8th, at 12:00AM EST. Good luck!