To test graphics cards for their power consumption, I utilize a couple of different tools. On the hardware side, I rely on a Kill-a-Watt power monitor, which the PC plugs into directly. For software, I use GPU-Z to monitor the core temperature, and 3DMark’s Fire Strike 4K test to push the GPU hard.

Once the PC is turned on and left to sit idle for ten minutes, I monitor the idle wattage (if it’s stable – it shouldn’t vary by more than 1W), and then I open up 3DMark to run its grueling test. It’s during the ‘Graphics Test 2’ that the max load wattage is recorded, by which point the GPU is nicely warmed-up.

Please note, though, that before I got to testing the RX 580 and RX 570, the motherboard in the test PC died, and had to be replaced with a different one on hand. As such, the wattages are not going to be perfectly scalable between these cards and the older ones. 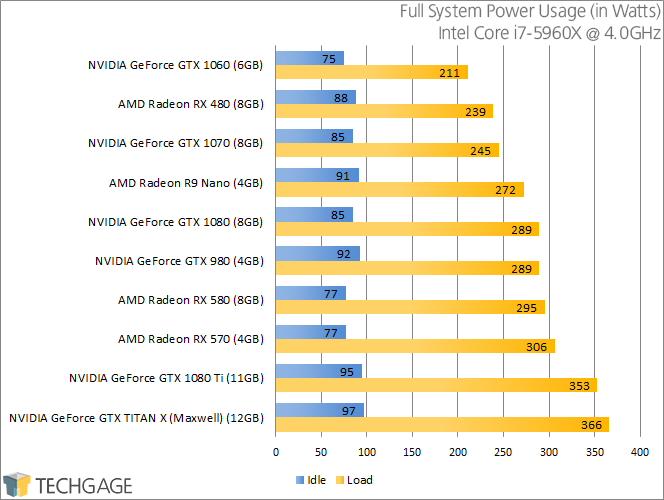 Both the RX 580 and RX 570 idle at the same 77W, which is lower than most (and could be attributed to a more efficient motherboard). At load, though, the RX 570 managed to draw more power than its bigger brother, although “bigger” needs to be explained. As seen on the first page of this review, PowerColor chose a more robust cooler for the RX 570, sporting three fans instead of two. I’d imagine that’s the biggest reason for the increased power draw. Compared to the GTX 1060 that the RX 580 competes best against, AMD’s latest cards draw a lot more power, which is a bit unfortunate.

This is one of the easiest reviews to wrap up, with huge thanks being owed to the fact that I feel like I just reviewed the same cards last summer. Clock-boosted products are not disinteresting by default; it’s ultimately the pricing that helps make sense of things. So what are we dealing with there?

That brings us to these cards’ biggest competitor: NVIDIA’s GeForce GTX 1060. This card tends to hover around $250, but some models can be found for a bit less, as of the time of writing.

That leads me to issue a reminder: shop around. Sometimes, you can get a better GPU for cheaper, while other times, you could end up paying more than what a card is worth. So, shop around, and use the savings on MORE GAMES!

At SRP, both the GTX 1060 and RX 580 are equals in performance, so whichever you go with would ultimately be up to your preferences with the featureset.

Speaking of featureset, AMD promoted heavily its “Chill” feature with the RX 500 series, which allows the cards to run with minimal noise and power when there’s no reason for it to ramp up. Take for example a MOBA that uses just a fraction of the entire GPU to hit 60 FPS. If conditions are right, your card will effectively become one of the quietest components in your machine.

It’s also worth highlighting AMD’s ReLive (as in, “I am going to relive this moment.”), which lets you record your gameplay using the power of the GPU. This type of recording isn’t ideal for archival footage, or footage that you consider to be very important, but given the almost nonexistent load it puts on your machine, it’s a great solution. For CPU-based encoding, OBS is the de facto solution (and for good reason).

Ultimately, your purchasing decision should come down to the featureset you want, and the price you want. The RX 570/580 and GTX 1060 perform pretty close to one another overall, to the point where $30 savings could be worth losing a frame or two. If you need specific help in picking out the right GPU, don’t hesitate to leave a comment!