After the major success that the original Portal experienced, Valve was no doubt under intense pressure to deliver a sequel that could live up to the hype it’s been receiving, if not surpass it. Fortunately, for those who’ve been patiently awaiting its release, Portal 2 delivers on almost all fronts – and yes, it’s easily GOTY material.

To help kick off what’s sure to be one of our smallest game reviews ever, allow me to ask two simple questions. First, has Valve ever released a less-than-stellar game title? And second, could Portal 2 really be the one to stray from the pack? On second thought… don’t answer those. It’d totally negate the need for a review, wouldn’t it?

You guessed it… Portal 2 is amazing, and worth a purchase. For those who need a bit more than a single line to sum up a game, however, the rest of the review is for you. Why a shorter review for such an impressive game? There are a couple of reasons; the biggest being that most of Portal 2 should be experienced first-hand, not be relayed to you through a review.

An extended reason is that overall, Portal 2 doesn’t change a lot from the beginning to the end, with a lot of the artwork and gameplay mechanics remaining largely the same. That’d normally be a bad thing, but Valve throws in enough variation to keep things interesting, and after a while, things like the quality of graphics won’t even matter. You’ll either be way too excited or satisfied with your accomplishments to care. 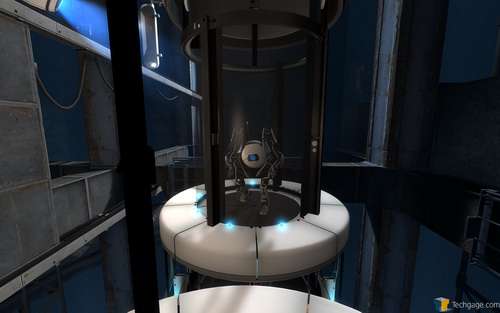 For the sake of not spoiling some of the more important portions of the game, I’m not going to go into great detail about the story, and in addition, all of the screenshots here are from the earliest of areas in both the co-op and single-player campaigns. For the sake of story though, I can honestly say that you’ll not regret playing through the original Portal first, if you haven’t already. While Portal 2 can be played and understood just fine without the original, integral parts to the overarching story tie the two games together.

Like the original, Portal 2 equips you with a Portal Gun capable of shooting a blue and orange portal, and for those unaware, walking in one will walk you out the other. It’s the most important mechanic in the game, and is imperative to master in order to succeed. Fortunately, the game provides about a half-and-hour worth of training levels that will put you on the right track.

In addition to the CEO of Aperture Laboratories being one of the voice-overs (this time voiced by J.K. Simmons; a great actor if you ask me), and also GLaDOS, the intelligent computer that controls most of the puzzles that get in your way, Portal 2 introduces Wheatley, a super-friendly yet frantic personality core once belonging to GLaDOS. Voiced by the Bristol, England actor Stephen Merchant, Wheatley helps guide you in the right direction and is always ready to make you laugh – even inadvertently.

I tend to dislike having a “sidekick” in any game like this, but similar to Alyx Vance from Half-Life: Episode Two, I quickly found myself preferring to have Wheatley around when he was, because his humor is genuinely funny, and can come at the right time when you are feeling mind-boggled from a complicated puzzle. 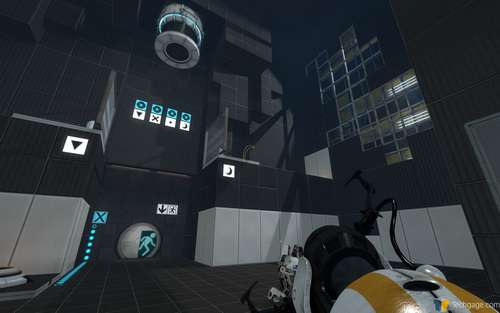 Portal 2 takes place just about where the original left off, and as a result, you’ll be solving puzzles in very desolate locations, with mechanical beings malfunctioning all around you, and so much overgrowth that you swear you can almost smell it. For some, this kind of world might not be preferable to the original, as that one was bright almost all the way through, but for the sake of the continuing story, the desolate state of things was required, and in the end, does still look great overall.

The downfalls of the game being based on the aging Source engine become obvious in parts, however. The first door handle you’ll come to, for example, is a totally flat texture, reminiscent of Xbox (original) games, not games produced in the last couple of years. For PC gamers running high-end PCs, this kind of thing can be depressing to see, but fortunately Valve well makes up for it by providing a clean look and lots and lots of eye candy.

One of the bigger perks of Portal 2 is that it offers both an individual single-player and co-op campaign; meaning that if you beat the game by your lonesome, you’ll still have a completely new set of levels to clear with a friend. I wasn’t quite sure how co-op would translate with a game like this, but Valve did a masterful job in making it a lot of fun. It’s borderline hilarious when either you or your friend accidentally kill the other, but it feels like a great accomplishment when you worked together to figure out a tough puzzle. 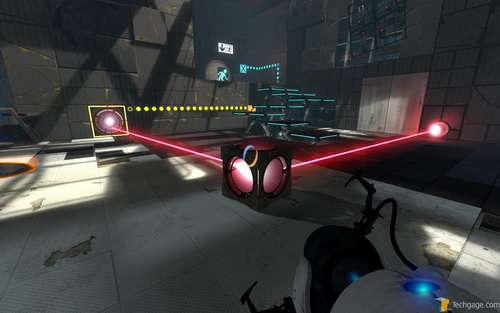 The single-player campaign will take about 6~8 hours to complete, while the co-op can take around 5. You can take longer or finish quicker depending on how quickly you solve some of the puzzles. While one person might take 15 minutes to clear a room, another might take 25 (usually me). While not entirely a long game, it’s in line with most other new titles on the market, and the level of fun you experience throughout is what’s important.

Aside from the dated graphics engine, the day-one DLC did manage to rub me the wrong way personally, especially with inflated prices ($5 for a new skin?!), but in the end, none of that is important at all, especially in a co-op game. If you care about superfluous things like hats, skins and other attire, the option is there. But if you don’t care for it, like me, it can be ignored. Thus far, none of the DLC impacts gameplay.

It goes without saying that if you enjoyed the original Portal, and love an engaging world and mind-bending puzzles, Portal 2 is a must-buy. There are few games that ever get released that truly keep you wanting more after you complete them, but Portal 2 is certainly one of those. While the replay-ability factor isn’t huge given this is a puzzle game at its core, it’s definitely one you will be revisiting down the road, again and again.