NVIDIA might have hoped for otherwise, but even after the GTX 480’s launch, AMD’s Radeon HD 5870 still proves to be an excellent choice for the price-point. We’re taking a look at PowerColor’s PCS+ version here, which includes a robust cooler, quieter operation, a slight overclock, and a complete copy of Call of Duty: Modern Warfare 2.

Late last month, NVIDIA unveiled its long-awaited GeForce GTX 480 graphics card. At the same time, it answered a lot of our questions, primarily the one of how it would compare against ATI’s highest-end offering, the Radeon HD 5870. As we discovered, while the GTX 480 does indeed out-perform the HD 5870 in most tests (~5 – 10%), the HD 5870 was arguably still the more attractive offering.

It seems odd to state such a thing, but the process of deciding between both cards boiled down to a couple of things. The most important was the price. As the GTX 480 is priced at $100 above the HD 5870, it’s a tough sell for a 5 – 10% performance bump. To make the decision even harder, NVIDIA’s launch cards suffer horrible temperatures, loud fan noises and draws far more power from the socket than AMD’s offering.

From a personal standpoint, I sided with AMD’s card at the end of that article, because it beat the GTX 480 in almost everything aside from the raw performance. Where the GTX 480 also shines is with PhysX and 3D Vision support, which AMD’s cards obviously do not. These two things aren’t deal-breakers for me, but they are for many. Two personal friends of mine opted for NVIDIA’s latest offerings (GTX 470 and GTX 480) primarily because of the PhysX support. So, NVIDIA’s certainly doing something right there.

Right before the launch of the GTX 480, AMD itself knew that it had nothing to worry about, because it sent us a card via PowerColor that aims to reaffirm AMD’s excellent performance/$ ratio. The card in particular we’re looking at is the PCS+ version, which uses a special cooler, features slightly higher clocks and also includes a full copy of Call of Duty: Modern Warfare 2.

By this point in time, you’re all likely very familiar with the Radeon HD 5870. PowerColor’s model does little more than up the clocks (850MHz > 875MHz Core and 1200MHz > 1225MHz Memory) and swaps out the reference cooler for another that’s a bit quieter and more efficient. And of course as mentioned above, this particular version also currently includes a free copy of Modern Warfare 2.

As it stands, the HD 5870 is still AMD’s highest-end single-GPU offering, with the dual-GPU HD 5970 sitting above it. For those craving a lot of screen real-estate, there’s the Eyefinity 6 version of the HD 5870 available as well. We’re in the process of preparing an in-depth look at that card and the six-display configuration, but are running far behind. Please stay tuned though as the article will be well worth it!

Below you can see PowerColor’s special cooler design. The shroud is a light plastic and allows a lot of air to make its way through. The fan is also large, and very quiet. As you can see, there are heatpipes extruding through the back, somewhat similar to NVIDIA’s GeForce GTX 480 design. 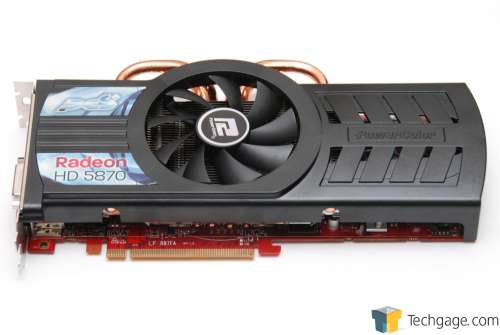 As you’d expect, the back of PowerColor’s card features the same video outputs we’ve come to expect from AMD’s HD 5000 series. This includes 2 x DVI, 1 x DisplayPort and 1 x HDMI. If you wanted, you could hook up four displays from this single card. In the same photo, you can see the CrossFireX bridge. 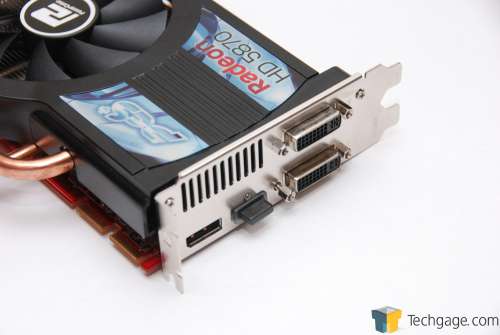 Here you can get a better view of the heatpipe design, and for the most part, it’s not far different than many other designed on the market. The heatsink itself is finned in its entirety with the heatpipes coming straight from above the GPU core itself. The design seems simple, but it’s efficient. 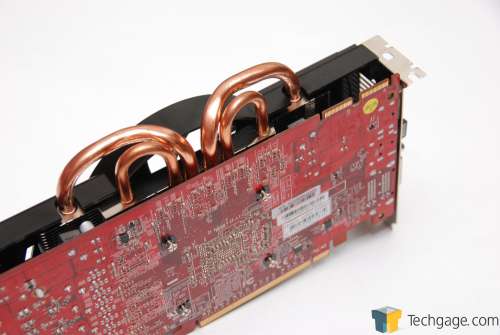 That about wraps up the look at the card, but as a reminder, PowerColor is currently bundling in Modern Warfare 2 with this PCS+ version, so if that’s a game you’ve been on the lookout for, you get a good deal when picking up this particular model.