With the speed that the video card industry continually updates itself, it’s difficult to keep on the cutting edge of the market. Not all of us have the money to purchase the newest, flagship GPU that comes out almost every 6 months. If you take a look at Steam’s -very- informative hardware survey, 7 out of the top 8 GPUs all cost at or under the 200 dollar price range. If we want to get deeper, we can go as far as saying that 17 out of the top 20 GPUs being used are all ‘budget’ GPUs. That alone tells us that either all the hardware junkies that update every time something new comes out collectively decide to not take the survey, or that PC gamers en masse just don’t have the money to upgrade all the time.

Those 7 GPUs account for almost 40 percent of all gamers subscribed to Steam and with the popularity of the Half Life games, I would like to think that the survey is at least, remotely comprehensive. While top end GPUs earn companies bragging rights, resulting in higher sales of lower level cards just be apart of the winning team, budget cards are truly the bread and butter category for all add in GPU manufacturers’ well, all 2 of them.

With budget being the battle cry, we are taking a look at Powercolor’s x1650 Pro. Way back in March, we took a look at the Powercolor x1600 XT Bravo Edition video card. In the review, the card offered playable frame rates in many popular new games and for an added bonus, was bundled with a game. All of these features, coupled with an attractive price, earned the card an editor’s choice award. On paper, the x1650 Pro and the x1600 XT appear to be very similar. While we are not offering any x1600 XT results for comparison as the two testing machines are completely different, the x1650 Pro should perform close to the x1600 XT.

Specs and Packaging and Installation

Before we get into the heart of the review, let’s take a look at the card itself. Coming to me in the retail packaging, the x1650 Pro’s box isn’t huge but it’s not small either. From the front, we see that the card offers ATI’s AVIVO technology. To break it down a bit, AVIVO offers quality video playback, crisp colors and crystal clear images. We also see that the x1650 Pro is certified to work with Windows Vista when it launches in the coming weeks. The major detail that catches my eye however, is the CrossFire ready statement. For those of you that don’t know, CrossFire is ATI’s answer to SLI. In Crossfire, just as in SLI, 2 separate video card work together to split the load of rendering, thus boosting frame rates. With a card like the x1650 Pro, CrossFire can be a definite upgrade solution as the cards sell in the mid to lower $100 range. 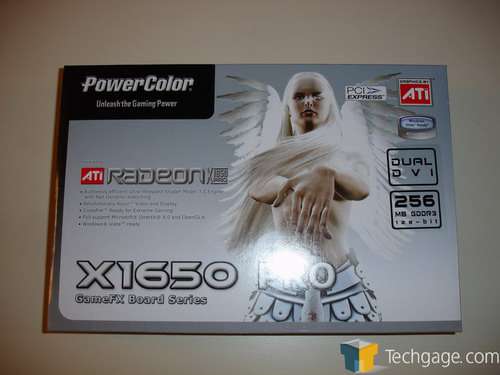 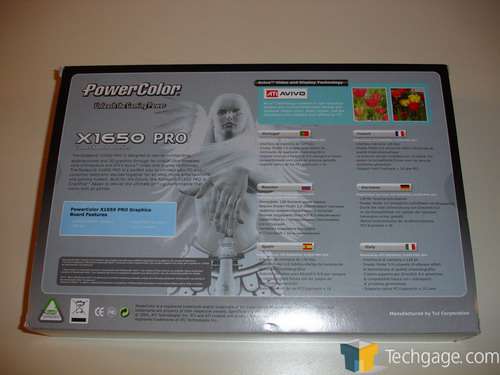 Once we open the box up, we see a somewhat limited bundle, if you can even consider it a bundle. Included with the x1650 Pro, Powercolor threw in a DVI-D to VGA adapter for those of you who use a monitor that needs an analog signal, a driver CD, a Cyberlink DVD solution CD, a manual and a VIVO cable. Underneath all of the ‘extras’ we see the card itself. Wrapped securely in an anti-static bag, the x1650 Pro is safe and sound. Once out of the bag, the first thing we notice is the size of the card. While providing dual DVI output, 256MB of onboard GDDR3 memory, the card is considerably shorter than our 7800GT. This is a welcome sight because it increases the usability of the card, allowing us to use it in virtually any PC case. A card of this size would be perfect for anyone who builds, or is thinking about building, a HTPC anytime soon. 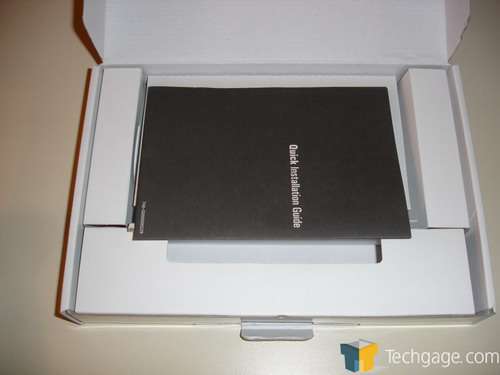 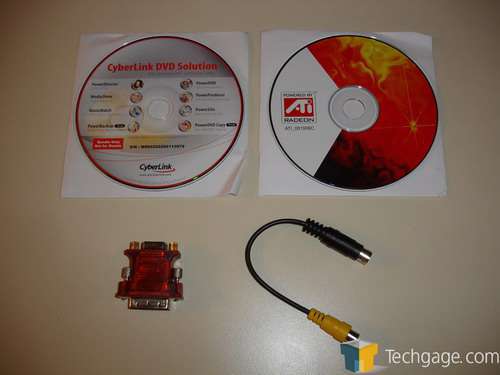 Here we see the difference in size between a relatively ‘normal’ sized, full length graphics card and our x1650 Pro sample card. 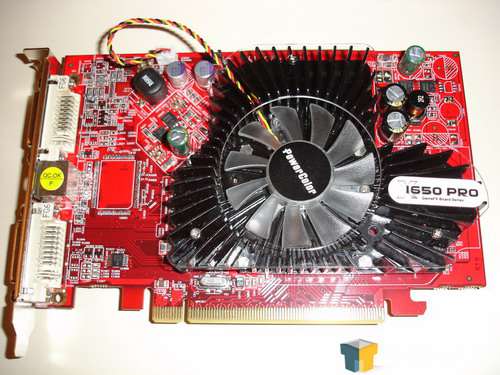 The x1650 Pro comes to us with a core clock of 600 MHz and the 256MBs of GDDR3 come clocked at 700 MHz for an effective speed of 1400 MHz. The card as the pictures show, includes a decent sized heatsink (relative to the card itself) that covers not only the GPU, but the memory modules as well. One thing that should be pointed out though is that even though the heatsink expands over the memory, it does not actively cool the modules. There is no thermal interface material (TIM) or a heat pad of any kind. Not really a huge deal but why not do something if the base of the heatsink is right there… oh well. 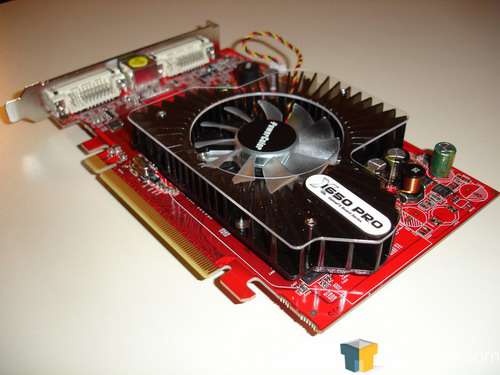 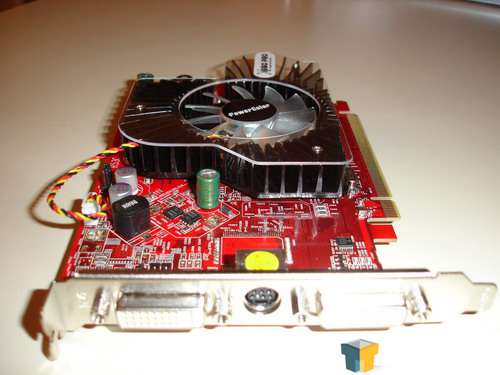 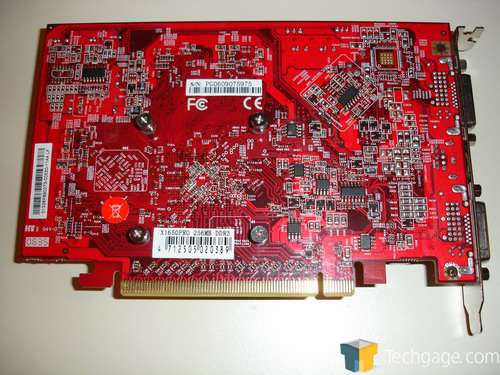 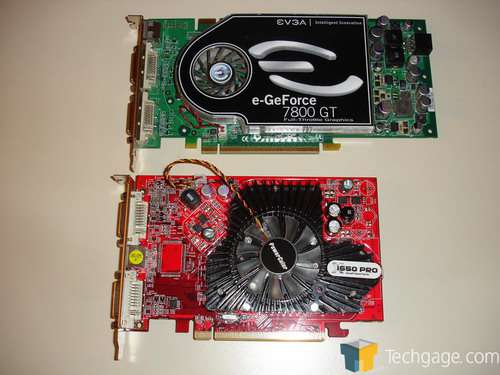 The x1650 Pro gathers all the necessary power the PCI-E bus, resulting in the exclusion of any additional need for power from a 6-pin PCI-E connector. This is nice when you consider that most video cards absolutely have to have extra power running to them, resulting in a cable running to the card. This is fine and all but there isn’t really much around the back of the cards usually so you have this one lone cable running into your card. Don’t get me wrong though, with power comes, well, power. I will gladly give up some aesthetic appearance for more GPU power any day but it’s nice for a change to work with a card that doesn’t need this. 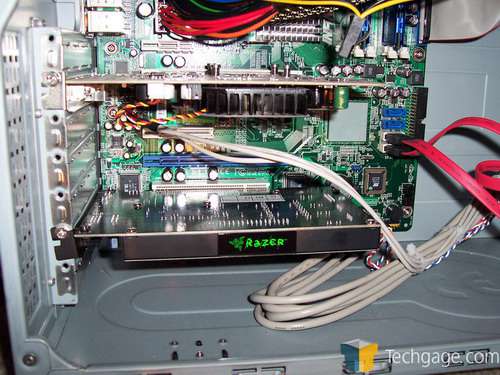 Let’s take a look at the specs provided by Powercolor themselves.