Not everyone plays first person shooters and because of this, many other genres have had their fair share of the limelight as well. My personal favorite type of game is real time strategy. In these types of games, you have an aerial view of the battlefield and from this view; you build up your base and army with the sole intent of crushing your opponent. With Rise of Legends, there is a classic battle between technology and magic. In this battle you can fight with three different races, Vinci (human), Alin (desert dwelling magic users) and the Cuotl (alien). With each race having their own different advantages and disadvantages and these will shape your strategy and how you play the game.

In the testing in this game, the 2 standard resolutions will be used, 1024×768 and 1280×1024. In both resolutions, game settings will be set right in the middle of ‘looks better’ and ‘better performance.’ These settings have lower quality shadows, less physics and less moving parts on buildings. 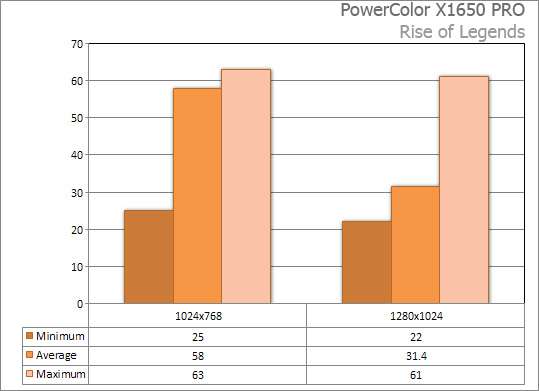 Oblivion has seemed to take over where Far Cry left off. There was a similar buzz surrounding Oblivion that was around Far Cry’s visuals when it came out. The large lavish outdoor settings, the detailed indoor rooms all look beautiful and lifelike. While the game looks amazing, the big reputation that it carries with it is that it’s very demanding on people’s PCs. Being a huge fan of the previous installment, Marrowind, I was one that eagerly awaiting the release of this game.

To run these tests, we started in the first area, in the caverns and cave. We worked our way out of the caves to the outdoor areas and the whole time, FRAPS recorded the results. The resolutions used were again, 1024×768 and 1280×1024. There was no AA used in these runs and no HDR. 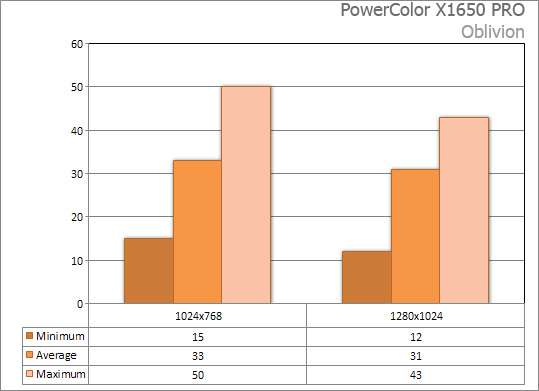 I come away from this review satisfied with the results we have seen. The Powercolor x1650 Pro can be found online for just over $100 and with a price like this, any budget minded gamers would be fine purchasing this card. As happy as I am with this card at this price, there are a few downsides. I was unable to get a stable overclock at all with both Riva Tuner and ATI Tools. In both programs, the test PC would lock up as soon as the settings were applied.

This could be because of the programs not wanting to cooperate with the x1650 or it could certainly be a problem with the card itself. Whatever it might be, I have found others on the internet that have ran into this same problem. For those of you who might get this card for an HTPC, this is not a problem at all but for gamers who want to stretch out as much performance from their cards as possible, they might be smart to look elsewhere.

The bundle left much to be desired, but for $120 dollars, you really have no right to expect much more than a driver CD and the card itself. The AVIVO is a plus, as is the DVI to VGA adapter.

With all this in mind, any gamer on a budget would be safe purchasing the x1650 Pro. The x1650 is basically a renamed x1600 XT but with prices about the same, the x1650 Pro would be a wise choice.

All in all though, I am giving the Powercolor x1650 Pro an 8 out of 10. The price is the major selling point for me on this. A budget card for 100 dollars is ideal.