by Rob Williams on November 14, 2009 in Processors

People scoffed at AMD when it released its Phenom II X4 965 a few months ago thanks to the 140W power rating. To help make up for it, the company has now followed-up with a 125W version, sporting a lower price, along with improved C1E and DDR3-1333 support. With these improvements, is the X4 965 a first-choice CPU?

When AMD launched its Phenom II X4 965 “Black Edition”, a lot of people questioned the reasons behind it. For the past couple of years, AMD has continually worked at releasing high-clocked parts in order to compete with like-priced Intel processors, but to release a 3.4GHz model mere months after the 3.20GHz 955 Black Edition seemed a bit odd. Of course, pricing was roughly the same, so a free speed boost isn’t much to complain over, right?

Well, it depends on who you ask, because with the clock boost also came a boost of another kind: power consumption. Typically, AMD aims to stick within a 125W TDP threshold for its higher-end desktop parts. A year or so ago, it would have been nothing to see a 140W part, and in fact, many motherboards out there specially had “140W CPU Support” stickers on the box. But since then, thanks to certain refinements, such as a smaller process, the desired power envelope could be modified just a wee bit.

But it seemed apparent that 3.40GHz just wasn’t going to happen with a 125W TDP, so the bump to 140W had to be made. This isn’t to say that those of you with launch X4 965’s couldn’t undervolt for lower power, but AMD can’t take any chances, so its testing processes to make sure of what’s possible is far more brutal than yours, and ours. You might find your X4 965 to be stable at a certain low voltage, but someone else might not. 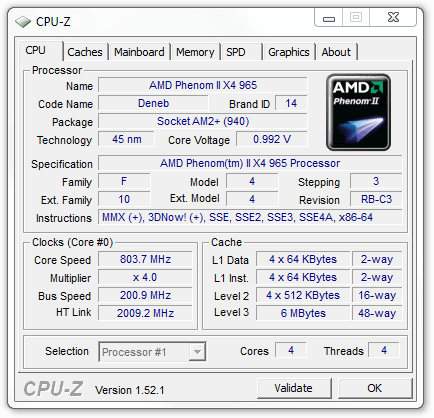 The drop from 140W to 125W isn’t going to make a major difference when it comes to real power savings, but an improvement is an improvement, and less power draw is better. Aside from this, though, the 125W model also boasts hardware C1E support, which is faster and more efficient over software solutions, and proper support for DDR3-1333 in a 4x RAM module configuration. Lastly, the price has also been dropped, from $240 to $195, while the chip’s main competition from our initial review, Intel’s Core 2 Quad Q9550, has remained the same, at about ~$250.

To see what kind of difference the improved TDP would have in a real-world situation, I ran our usual stress test of LinX in order to push the CPUs to their highest point, while monitoring both the temperature and power consumption. Since this is a quick look, I won’t exhaust our testing methods here, but if you’re interested in seeing what we use for a testbed, and how we stress our CPUs, you can refer to our most recent AMD review of its Athlon II X4 620. 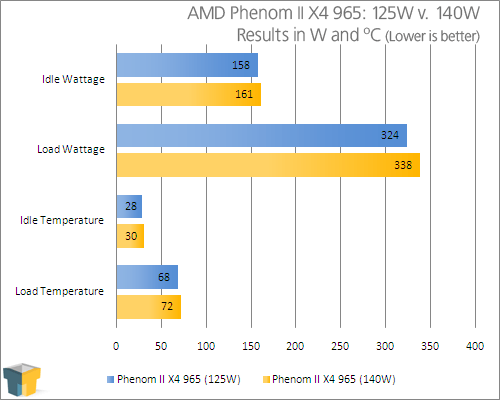 At idle, the improvements of the 125W model are minor, at just 3W, but at load, it proved much more power efficient, drawing 14W less overall. That’s quite a figure, because it’s just 1W off of the 15W TDP differential between the two models. I admit I didn’t expect to see such a real drop, but it’s here. Smaller differences are seen with the temperatures, but there are drops nonetheless, with a 4°C improvement at full load, and 2°C improvement at idle.

Performance-wise, AMD told us to not expect any real differences, and in all my quick tests, I can see why that’s the case. Generally, though, the 125W did seem to be just a bit slower overall compared to the 140W, but the differences were so slim, that it was almost a non-issue. I’m talking a ~300 point difference in Cinebench, out of a regular score of 14,000. This difference could possibly be due to the C1E power throttling feature (which we kept enabled).

Some two months have passed since AMD launched its initial X4 965, and while that’s not much time, it can be where PC components are concerned. Is it still relevant? That’s a tough one to answer. In our review of the first version of the X4 965, we stated that it was worth the money when compared to a similar Intel chip, because though it cost a little more, it was faster in almost all of our tests. But today, we have the Core i5-750 out there, so it complicates the situation.

AMD does have the nice benefit of having a wide variety of quality motherboards for low prices, however. There are many value motherboards out there on the Intel side as well, but when we’re talking about $100 offerings, AM3 boards tend to be very feature robust compared to what’s available for Intel at the same price-point, especially when we’re talking about P55. So the decision between the two is a total toss-up. Personally, I’d go for Intel’s chip as I appreciate lower temperatures and power consumption, and also because it’s a tad faster at what I want it to do, but your situation and/or needs may be different.