It’s not just an easy brawl though, because to hit really hard, you have to keep your Chi full of power. To charge your Chi up, you must swirl your mouse around in a circle, clockwise or counter-clockwise. As you do this, you will see the progress by a beam of light that emits from your character. When your Chi is at full power, that’s when you are truly ready to wipe the floor clean. 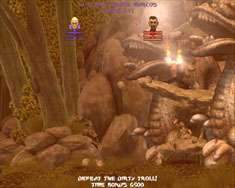 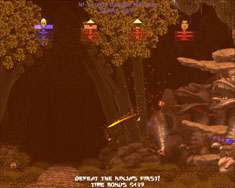 There is a nice collection of weapons in the game, which you can find by smashing large pots as they spawn. Without a doubt, my favorite would have to be the small sword that you can find. It’s easy to use, and the results are evident! The sound you hear as you chop your enemy to pieces adds to the fun, and will keep you swirling your mouse until your arm wants to fall off.

Other cool weapons include Nunchuckus, which are also quite fun to use, but more difficult to master than the Sword. The Nunchuckus come in handy if you wish to smash rocks though, or your opponents head. One bizarre weapon I found in my travels was a dog on a leash. This not only adds to the uniqueness of the game, but shows also the huge sense of humor this game has.

Rag Doll Kung Fu is not only meant for single player, but multi-player as well. For single player, you will first start off with the usual training level, and continue up the ladder to the final boss. One thing that adds a lot to the levels, is the pure integration with video. Once you beat a level, you will immediately be brought to a video… without skipping a beat. The same happens once the video finishes… you will be straight back into the new level for more action.

Not only is there a multi-player mode, but there is even an online mode. There is a good collection of mini-games to choose from, including Soccer, High and Long Jumps, and Ninja Onslaught. Soccer is pretty self explanatory, but it’s of course unique in this game. You try to fend off your opponent while trying to get the ball in his net. Simple concept, but it’s a blast. The high and long jumps are again common sense, but mastering these mini-games will help you learn how to jump super high, and even fly to an extent. Though I did not get a chance to play online yet, you can choose from either LAN or over the internet. 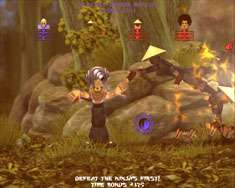 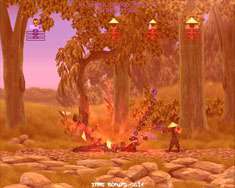