by Rob Williams on December 13, 2006 in Peripherals

It’s been a while since we’ve seen a new Ratpadz release, but here we have the XT. It’s an update to the original, which is designed to be very sturdy while offering you a slick surface to give you precise control.

We don’t take a look at many mousepads around here, but the Ratpadz caught my eye for a number of reasons. First, it’s developed by the owner of HardOCP, Kyle Bennett. I found it interesting that a fellow hardware site owner put out his own product for public consumption, so I had to get one in to see how it stacks up to my beloved fUnc Archetype. Second, this looks like one sturdy mousepad, and that’s one thing they emphasize.

You won’t find a huge selection over at Ratpadz. Only the GS and XT are to be found, which are the same size but have a completely different feel to them. The GS is softer, so it may treat your palm better during long game sessions. The XT on the other hand, is extremely sturdy and tough. The XT, compared to the GS, also has a much slicker surface.

The XT didn’t arrive in fancy packaging that is so common nowadays. Rather, it’s slid into a standard mailing envelope in order to keep costs down. The more money they save on shipping, the less the pad will cost you in the end. The lack of packaging is not a problem though, because as I mentioned, this thing is tough.

No scratches could be found on the pad when it arrived, which does say a lot about it’s durability. It’s not too often I receive even a simple package that’s in the same condition that it left the factory in. Here is an overview shot. 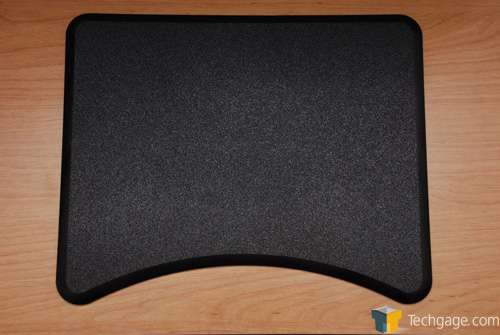 Not a huge pad at 11.5″x9.3″, so those who love huge surface areas will have to look elsewhere. Since I have a small desk (believe me, I do) this proved to be the perfect size compared to any mousepad I’ve used previously. Because of this small desk, I have to use my mousepad vertically, and because of the XTs design, both the pad and keyboard fit on the tray together perfectly.

For a better idea of the size, you can see the Logitech G7 here compared to the size of the pad. 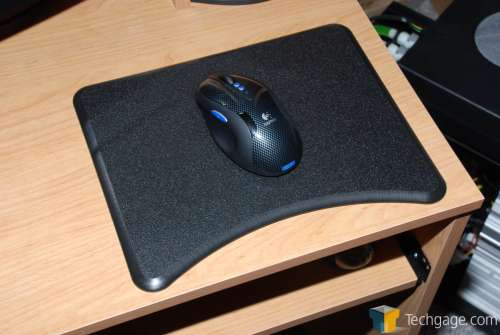 In the saturated mousepad market, you will find some with cloth surfaces, hard and soft plastic and even glass. The XTs however is manufacturered using a high-grade polymer, which helps in making the pad hard as hell. If you threw the pad at anything, it would surely do more damage to the object than to the pad itself.

Though it’s difficult to tell with a photograph, here you can see the texture. 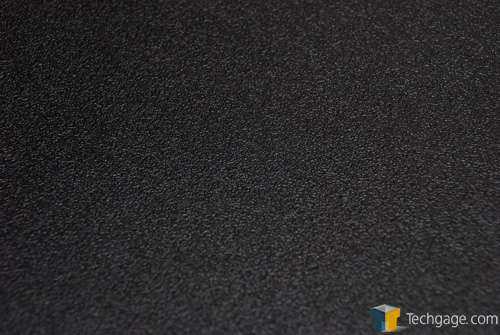 The bottom has 9 grip feet. This pad will not slide around during gameplay at all. If it does, you must be playing on ice pre-treated with KY Jelly. 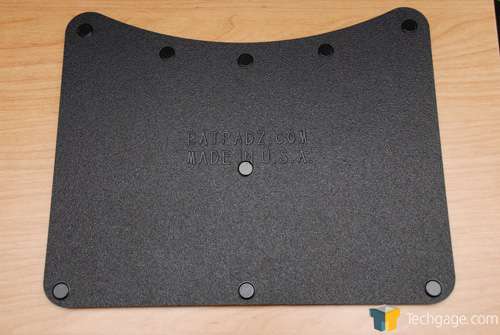 In our final picture, we can see that there is no question about where to purchase the pad or where it’s manufacturered. 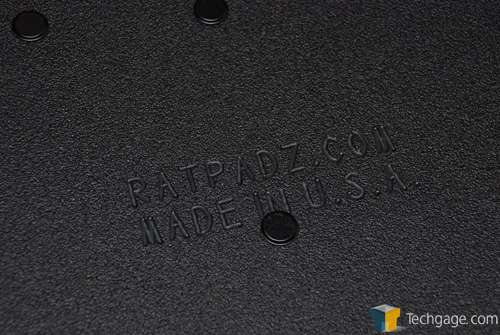 Before I received the XT, I shot Kyle a few questions to get his input on a couple things. Up until recently, I was unaware that Ratpadz was his company, so I wanted to see where the inspiration came from, and why he did things a certain way. Here are his replies.

Techgage: When was the original Ratpadz released, and what were your goals?

Kyle Bennett: Long story short. We met with the leading hard surface mousepad company in the world in July of 1999 to make a special pad for HardOCP readers. We wanted special shape, size, and graphic. After messing around with them for months, we were getting no action on our order. I got in an argument with the owner of the company, and during the heated conversation, I threw out there, “Well I will just make my own damn mousepads.” He said, “You do that!” I hung the phone up, thought for a second, and decided to make my own damn mouse pads. :) I worked in industrial sales for the 9 years before that and I was very familiar with the plastics market. We started
selling our own surfaces a few months after that conversation.

The goal of the “Ratpadz” was to build a solid long lasting surface that was slick as all get out and large enough to mouse on. When we launched we were the biggest hard surface mousepad for sale. A good gaming surface is good, but a great mousing surface let’s you stack up the head shots, with the right mouse of course.

We also wanted something bigger than what was out there and there was no doubt that people playing online games at that time needed better surfaces. At that time deathmatch ruled and being quick and precise while DMing was a must. As for the market, I had no idea that Ratpadz as a company would have lasted beyond the first production run. I was shocked that we sold so many the first year.

TG: Did you personally have a part in the design process?

KB: Yes, I have always been “the guy” that put it together. The new Ratpadz XT is a bit softer than the original, which makes it quieter and bit softer feeling than the old ones. We will also have better surface consistency this time with the XT as all of the plastic being produced is being made specifically for us. This is not just some off the shelf product.

TG: Finally, why should people buy a Ratpadz? What are the advantages?

KB: First off, made in the USA! All materials, equipment, and labor are pulled from GA, LA, and TX.

I think the Ratpadz XT will give you an overall better value than anything other mousepad in the market. We still have people using the original Ratpadz that have been using them for 7 years now. Considering a Ratpadz XT cost $25 shipped, if you use it for 5 years, that works out to about 1.4 cents per day to have one of the most accurate gaming surfaces on the planet under your mouse.

To test out the pad, I did what any normal person would do. Use it as an excuse to game for a few hours. I loaded up both HL2: Episode 2 and also GR: Advanced Warfighter. I am not really a fan of slick mousepads, and that became evident pretty quickly. The effect of a slicker mousepad is the same as if you increased the sensitivity on your mouse by a small margin. Less slick pads will hold the mouse better, while slick pads are designed to offer you the quickest control possible.

Slick pads are not for me, as I mentioned. However, after turning the sensitivity down in both games I mentioned, I started to enjoy the pad a lot more. I still had that slick control, while still having “full” control over what I was doing. It’s hard to describe, but this may very well be the first slick pad I’ve used that I actually enjoyed.

I admit, I am more impressed by this pad that I thought I would be. It is going to replace the mousepad on my gaming rig for a while, to see how it is over long time use. Currently, I’ve only used it for the duration of a few hours while gaming. During that time, I had no immediate problems at all. The control was tight, yet lenient at the same time.

One of the only things I have against the pad, may very well be my own problem. Due to the tough nature of the pad, it started to bother my palm after a while (two hours), which is when I had to stop gaming. I mentioned my small desk earlier, and due to that fact I must place the mousepad vertically. As you can see by the pad itself, it’s curved in such a way, for a reason. So, if you use the pad vertically, you may run into the same problem I did. If you game on a table or a large desk, this may not be a problem for you.

The XT retails for $25, which is a great price in my opinion for three reasons. First, it’s a solid mousepad. Slicker than I’d personally like, but each person will be different. Second, shipping is included with that price, so essentially the pad itself costs $20. Lastly, this is one pad that will last. You can’t say that about most others out there. I generally change mousepads on the gaming PC around once every six months due to dirt, wear and tear. You will not run into that problem very quickly with the XT.