One of the top contenders for â€œMost Underappreciated PC Componentâ€ definitely has to be the sound card. When it comes to spending money on upgrading our rigs, pristine sound quality typically takes a back seat to dazzling, high-definition graphics performance. However, apart from the improvement in sound quality that a discrete sound card provides, the sound card you choose for your machine can actually affect your machineâ€™s overall performance (believe it or not).

This is because different audio chipsets put varying degrees of load on your machineâ€™s CPU based on the methods they use for things like signal processing algorithms. You certainly wonâ€™t hamstring your PCâ€™s performance by choosing a less-than-optimal sound card, but the impact that a sound card can have on 3D framerates (for example) should not be discounted. The more processor power a particular audio chipset requires from your CPU, the less it has available to devote to things like physics calculations and AI processing, and that can take a bite out of your machineâ€™s maximum performance. Who knew?

Performance ramifications aside, music-lovers and home theater aficionados wonâ€™t have a hard time making the decision to jump from their motherboardâ€™s onboard audio chipset to a discrete sound card. When choosing ancillary components to build into their motherboards, motherboard manufacturers typically focus on cost, not audio quality, and as a result these chipsets typically deliver middling sound quality at best.

Whatâ€™s more, locating the audio cardâ€™s analog signal traces directly beside data and power traces on the motherboard can cause electrical interference to enter the sound cardâ€™s preamplifier circuitry, adding unwanted noise and absolutely killing the overall signal-to-noise ratio. That means youâ€™ll have to crank up your sound cardâ€™s output even further to overcome the noise floor, and reduce the gain on your external amplifier or powered speakers to compensate.

A low-quality audio chipset can also inject intermodulation and harmonic distortion products, and can suffer from poor definition and lackluster bass. Itâ€™s easy to see why quality sound is important to audiophiles and home theater enthusiasts, but is there any reason for PC gamers to obsess over audio quality? 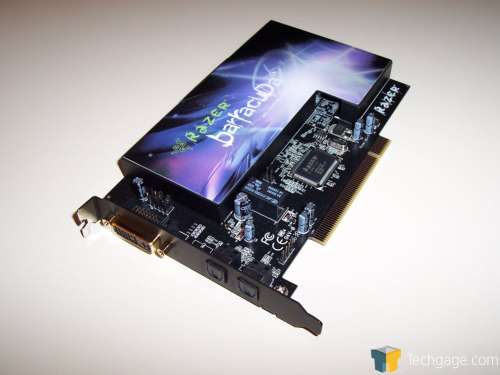 One company that wants to make the case for good sound to gamers in particular is Razer, most widely known for their line of gaming input devices. According to Razer, if youâ€™ve got great visuals but not great audio, youâ€™re missing half the picture. Modern games incorporate positional 3D audio and multichannel soundtracks. The former can make the difference in your ability to hear and respond to nearby opponents; the latter simply affects your overall immersion in the experience of the game.

Companies like Creative and AuzenTech have marketed their audio cards based on what improved audio fidelity can bring to your media experiences, but Razer has developed the Barracuda Gaming Audio System specifically for the needs of gamers. The Barracuda Gaming Audio System isnâ€™t â€˜justâ€™ a sound card, nor is it â€˜justâ€™ a set of headphones. Instead, the two products (AC-1 7.1 sound card and HP-1 5.1 headphones) are designed to work together with a set of special software drivers to address the specific needs of gamers, though as youâ€™ll see, theyâ€™ve managed to deliver up an audio solution thatâ€™s a solid all-around performer, whether you use it with the matching headphones or not, and regardless of if your primary passion in life is PC gaming.

At CES 2007, Razer unveiled the next stage in their quest for leadership in PC peripherals in general, and PC audio in particular: high-quality powered speakers. The Mako 2.1 loudspeakers feature engineering by THX, Ltd., one of the foremost authorities in quality sound and video. While THX has focused mainly on testing and certifying gear by other manufacturers in the past, Chief Scientist Laurie Fincham (of KEF fame) and his team of engineers have turned their attention toward providing engineering and design consulting services to loudspeaker manufacturers in order to push the envelope of audio performance and innovation.

With Razerâ€™s matchless attention to detail, combined with THXâ€™s years of know-how and experience with the worldâ€™s finest audio systems, itâ€™s no wonder the industry press is abuzz with anticipation over Mako. When the Mako speakers finally become available this summer (weâ€™re told), itâ€™s likely that users will want to pair them with Razerâ€™s Barracuda AC-1 sound card, so I feel this review provides a fitting prelude to the Makoâ€™s eagerly awaited introduction.