Up until recently, Razer hasnâ€™t been a company thatâ€™s known for their audio products. They are, however, well-known for doing their homework when it comes to the development of a new product, and the Barracuda AC-1 serves up a bevy of features that gamers, HTPC enthusiasts, and music lovers alike can get excited about. 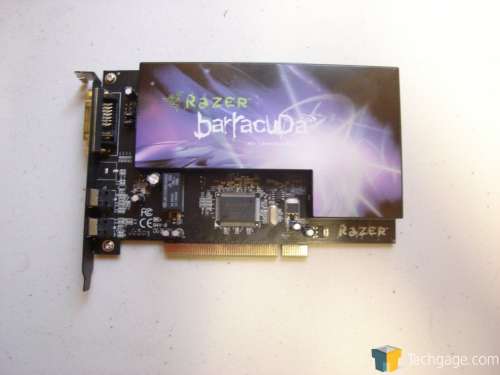 The front of the Razer Barracuda is dominated by a large metal box, which covers most of the card. The box is meant to function as a shield against electromagnetic interference (EMI) from the other devices in the case. An operating PC can generate significant EMI, which can leak into the analog portion of the signal chain (part of the reason why onboard sound cards usually have such a low signal-to-noise ratio, or SNR). This shield conducts any magnetic fields away from the sensitive analog components (opamps and the like) which are underneath, helping keep the analog output of the sound card as pure as possible. 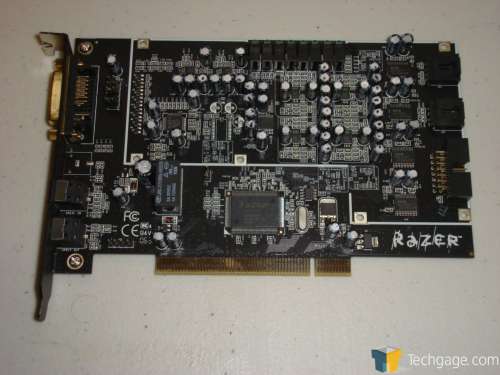 The EMI shield is removable, revealing whatâ€™s underneath: a maze of analog and digital circuitry. In addition to plenty of tiny capacitors and resistors, I discovered four AKM AK4396VF DACs (digital-to-analog converters; likely each is a two-channel unit), six Analog Devices ADA4850 opamps, a Wolfson WM8785G 24-bit/192KHz ADC (analog-to-digital converter), and a Razer-branded IC marked â€œRZR 1532â€, whose purpose I canâ€™t discern. Perhaps it incorporates a couple more opamps, to make up for the two missing from the overall number of discrete opamps. Also under the hood are sixteen green LED lights, which illuminate a â€˜Razerâ€™ logo on the side of the card. 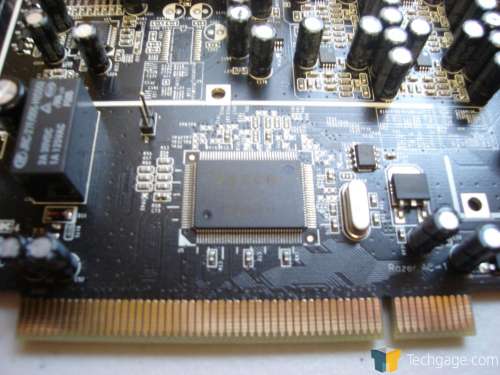 The Razer Fidelity chipset on board the Barracuda AC-1 is actually a re-branded C-Media CMI8788 chipset, better known as OxygenHD. Itâ€™s the same chipset thatâ€™s used by the Auzentech X-Meridian (which Techgage has also recently reviewed), though the Barracuda AC-1â€™s PC board uses a different design, with different output stage components. The CMI8788 OxygenHD chipset is essentially a multichannel signal processor with software control and support for 32-bit D/A conversion, though the Barracudaâ€™s DACs donâ€™t support this level of resolution.

If 24-bit resolution is good enough for DVD-audio, itâ€™s good enough for just about any other currently-available format. The CMI8788 operates at 24.6MHz, and provides programmable channel routing with 4 input data stream pairs (8 total streams) for up to 7.1-channel operation (the eighth channel handles the discrete subwoofer information). In fact, I discovered that C-Mediaâ€™s own CMI8788 drivers are capable of operating the Razer Fidelity card, though the Razer-supplied control panel loses its functionality, and itâ€™s just a better idea overall to use Razerâ€™s included drivers.

C-Media claims a 117dB SNR for this card, besting even the Creative Audigy4, though this is only through the CMI8788 processor itself, not necessarily through the entire signal chain on the card. Each of the AKM DACs is rated for 120dB SNR, and the entire analog output stage of the sound card is EMI-shielded, so this spec doesnâ€™t seem impossibly optimistic. However, the Wolfson ADC used here is only rated for 111dB SNR, so audio input to the card wonâ€™t be as pristine as the cardâ€™s output is capable of. That factor may also limit this cardâ€™s score on RightMark Audio Analyzerâ€™s Loopback tests in the testing that is to follow. 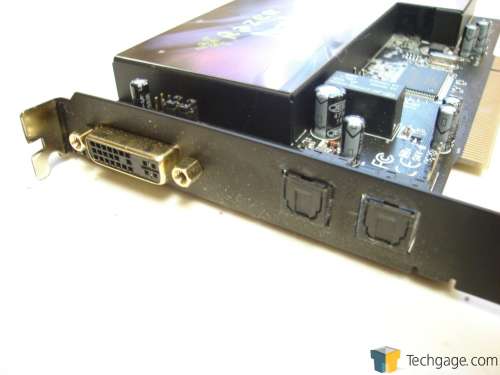 The Barracuda AC-1â€™s black-painted input panel has a fairly clean appearance, with a pair of optical Toslink connectors, one input and one output, and a larger connector that Razer calls HD-DAI (High Definition Dedicated Audio Interface) â€“ which is essentially a DVI connector repurposed as a quick-connect solution for Razerâ€™s Barracuda HP-1 5.1-channel headphones. The two products, the AC-1 and the HP-1, are designed for each other, and intended to function as part of a complete audio system.

Gamers who regularly tote their rigs to LAN events will certainly appreciate this touch, since it eliminates the need to fumble through multiple connectors in low light to set up multichannel headphones. Razer provides a dongle with the HD-DAI connector at one end, and six 35mm stereo miniplugs at the other end, for connecting third-party headphones, speakers, or other audio systems that donâ€™t use the HD-DAI connector.

The included dongle actually makes it possible to add the convenience of the HD-DAI connector to any set of multichannel headphones or powered speakers, at the expense of a little of the elegance of the HD-DAI solution. That said, it would seem a bit pointless if Razer did not carry the HD-DAI concept with future audio products like the upcoming Mako 2.1 speakers. 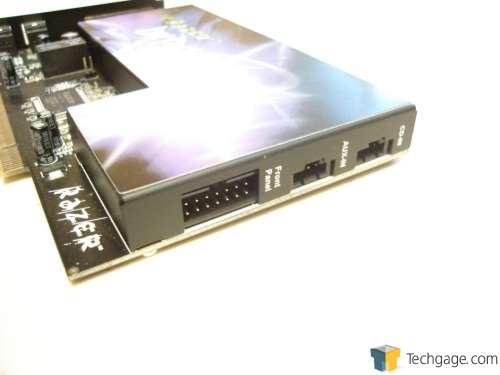 On the anterior of the card, there are three connections â€“ two connectors for analog audio input from CD players (a vestige from the days before Windows Media Playerâ€™s digital playback mode), meant to ensure compatibility when used in significantly older machines, and a large block connector for audio input/output jacks on the front of the PC case. However, the front audio connector provided by my Antec P150 case is a different type entirely.

According to Razerâ€™s supplied Master Guide, this type of connector (AC â€™97 standard-compliant) will need to be connected directly to jumper group J26, found on the PCB, right behind the HD-DAI connector. Simply remove the existing jumpers and attach the AC â€™97 connector. Iâ€™ve never even seen a case that uses the bigger type of connector found on the front of the card. I would rather have seen only one AC â€™97 connector on the front of the card, instead of hidden at the very back.

Overall, Razer has delivered a solid hardware package, based on a well-reputed and widely-used third-party chipset, and fleshed out with some thoughtful feature additions. Next, weâ€™ll examine the drivers and software included with the Razer Barracuda AC-1.