The Razer Barracuda AC-1 is an impressive piece of hardware, but like any sound card, it relies on a stable and functional software driver to make it go. By all appearances (matching file names and such), the underlying driver provided with the Barracuda AC-1 is the same as the driver provided on C-Mediaâ€™s web page, the same one thatâ€™s bundled with the Auzentech X-Meridian and Sondigo Inferno. However, the Barracuda AC-1 driver set includes a special Razer-developed control panel thatâ€™s much improved over the basic C-Media one. 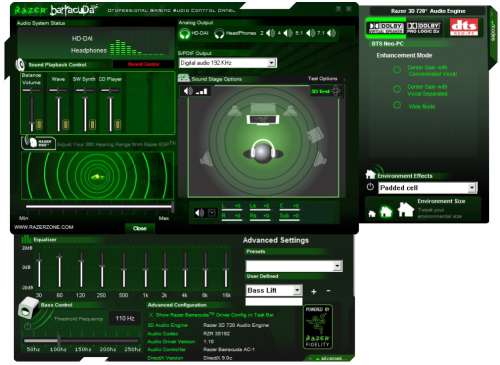 Also missing from Razerâ€™s control panel are controls for the â€œKaraokeâ€ features of the C-Media driver, which include microphone reverb, voice changing, pitch shifting, and vocal filtering. These features may be gone from the control panel (since most gamers I know wouldnâ€™t be interested in them), but I was able to access them through the C-Media Xear3D control panel while testing the card with the reference drivers.

The main panel of Razerâ€™s control panel features the main system mixer, which can be switched between playback and recording controls by clicking on the label at the upper right corner of the mixer, which toggles between views. At the upper right corner of the main panel, you can select your speaker configuration. The HD-DAI option is essentially the same as enabling the â€œ5.1â€ output; I canâ€™t tell that it does anything different. Youâ€™d choose this option if youâ€™re using Razerâ€™s HP-1 headphones, which connect directly to the HD-DAI connector on the back of the card. A drop-down menu provides options for the cardâ€™s digital output, which include sampling rates up to 192kHz, and a couple of DSP options as well, which Iâ€™ll cover in a moment.

The graphic below, labeled â€œSound Stage Optionsâ€, displays the active number of speakers, and allows you to adjust each channelâ€™s level independently. The speaker icon activates the level controls; the 3D Test icon causes the sound of a helicopter to circle your head. Directly under the graphic are controls which allow a time delay to be applied to each active channel. If your room isnâ€™t perfectly square, or you arenâ€™t seated directly between your two speakers, adjusting the delay settings will help you achieve a more natural soundstage. Hereâ€™s a hint: sound travels at about 13,500 inches per second.

At the bottom of the main panel is a tab labeled â€œadvancedâ€¦â€ Clicking on this tab causes another panel section to slide out, containing a graphic equalizer (with user-definable presets and broad +20dB/-20dB adjustment range) and a â€œBass Controlâ€, which allows the adjustment of the subwoofer crossover frequency when using a multichannel system configuration, or Razerâ€™s HP-1 5.1-channel headphones (which incorporate discrete sub-bass transducers). If no separate subwoofer control is desired, the control can be enabled/disabled by clicking on the â€˜power switchâ€™ beside it.

Even if you donâ€™t have a subwoofer, the bass threshold control can be helpful when using very small speakers that donâ€™t have a lot of bass capability. Trying to cram too much bass through a pair of tiny drivers generally results in a generous helping of distortion. Simply set the bass threshold to a low frequency, in the neighborhood of 50-60 Hz, and the bass control will act as a subsonic filter, filtering out the lowest lows and reducing distortion over the rest of the speakersâ€™ range. 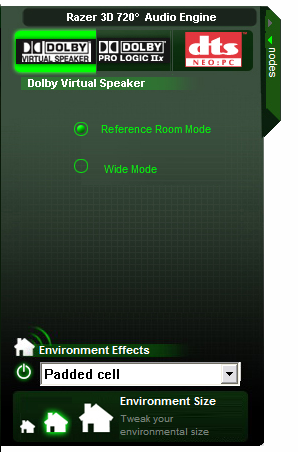 The upper right corner of the Razer Barracuda control panel contains a tab similar to the one on the bottom of the control panel, but labeled â€˜modesâ€™; it conceals a second slide-out panel containing the various DSP (digital signal processing) modes offered by the Barracuda sound card. These arenâ€™t half-hearted proprietary DSP algorithms, either â€“ theyâ€™re all industry standards.

The Razer Barracuda AC-1 features Dolby Digital, Dolby Headphone, Dolby Virtual Speaker, and Dolby Pro Logic IIx processing, as well as DTS Neo:PC enhancements. Still more DSP options are available on the cardâ€™s digital output; theyâ€™re accessed via the S/PDIF drop-down menu in the main panel, and include Dolby Digital Live and DTS Interactive. The â€˜modesâ€™ panel also contains environmental effect settings, which include various room options and three environment sizes that affect the duration of reverberation. I didnâ€™t expect much from these additional effects, but I was surprised by their realism and quality.