At the start of the review, I explained how a sound card can affect your PCâ€™s overall performance while running sound-intensive applications. Here we put the rubber to the road and actually see how the Razer Barracuda will affect your maximum machine performance. In my last test, I compared an onboard Realtek audio chipset, a Sound Blaster Audigy4 sound card, and the Barracuda AC-1. Iâ€™ll be comparing these three audio solutions based on CPU usage, to quantify how each card will affect your systemâ€™s overall performance. This test will be based on 16, 32, 64, and 128 simultaneous buffers (concurrent sounds).

To make these measurements, RightMark 3DSound 2.3 was used to generate random noise and load each audio card with a number of concurrent buffers, which was varied to show a trend in the increase of CPU usage based on different cards. The programâ€™s algorithm monitored CPU usage over a period of 1 minute for each test, and then averaged the values over time. All other programs running on the computer were closed to minimize variance based on other programs vying for the CPU. 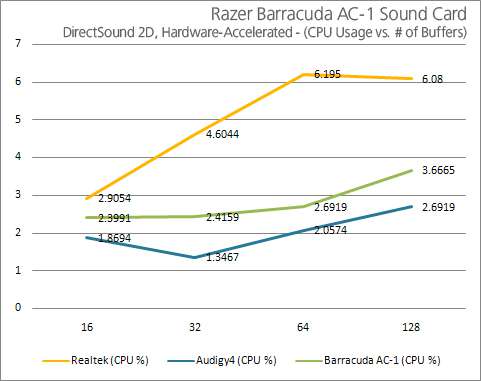 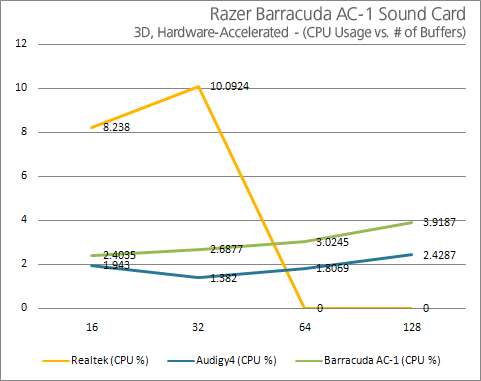 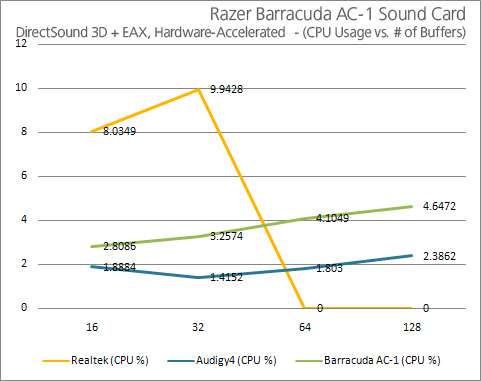 So, what does this all mean? The Audigy4 stayed below 2% CPU utilization through all tests, making it the best performer of the bunch â€“ it will make the least impact on your CPU usage. Because the C-Media CMI8788 audio chipset performs most of its signal processing in software, thereâ€™s very little hardware acceleration available, which means that your CPU will take more of a performance hit with the Barracuda (or any OxygenHD-based sound card) than it would with one of Creative Labsâ€™ Sound Blaster solutions, like the Audigy4 or X-Fi. However, in the grand scheme of things, either sound card is a significant improvement over using a Realtek HD Audio onboard chipset, which was shown to be by far the worst offender in CPU loading.