LAN parties are popular. So popular in fact, that the industry itself has seen trends emerge from the requests of LAN party attendees. One needs look no further than the SFF. This is an item that is basically a desktop PC in a box. Another example would be sound equipment. You don’t want to carry around speakers with you everywhere you go, so the only logical alternative is to get a set of headphones (primarily because speakers aren’t allowed at most LAN events.) The addition of a headset is wise, even if you do not play at LAN events as it allows you to hear better while not disturbing those around you. *

Getting back on track, today we are taking a look at Razer’s newest addition to its stable of gamer ready hardware: the Barracuda HP-1 gaming headphones. In the past, we have taken looks at the Copperhead, the Krait and the Armadillo. Out of those three products, only the Copperhead really shined the brightest and that’s because it filled a need. There really isn’t a need, in my opinion, for a RTS/MMO exclusive mouse just as there really isn’t a need for a cable weight. With that said however, the Barracuda fills a hole in the Razer lineup that has needed filled for quite some time. The purpose of today’s review is to see just how well this headset sounds.

The retail casing of the HP-1 is just as one would expect from Razer. The box is a non-glossy black that folds up at the top to reveal the headset in its plastic shell. 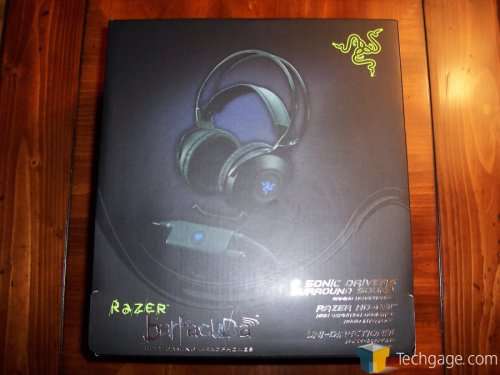 On the back of the box, there is information about the HP-1 and this information is also repeated in many other languages. On the side of the box are two testimonials from two gaming champions.

From a marketing standpoint, I understand why these two gentlemen’s responses were included on the side of the box but for me, their words carry zero credibility. Here we have two gentlemen, who are talented gamers obviously, proclaiming the virtues of these headphones. The thing that most should take into consideration is that they were more than likely given these headphones and therefore making their response biased. But, this is not unlike the reviewing process where we are given hardware to review but are trusted to deliver an unbiased opinion based upon our experience. So, who knows, perhaps these guys absolutely love this headset. Again though, this makes perfect sense from a marketing standpoint. Like it or not, this is the future of advertising. Gamer’s mugs on the front, back and side of boxes, just reminding us how great this product is, true or not. Thanks for nothing Fatal1ty! 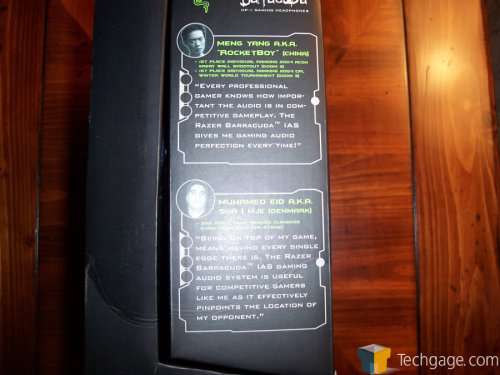 On a side note, doesn’t Mr. Yang look totally pissed off?

Getting back to the review, I have now taken the headset out of the box and am presented with a plastic shell. For those of you not familiar with packaging like this, these plastic casings are intended to deter anyone who might want to ‘walk off’ with these in a store. That and they provide terrific protection during shipping and in the store itself. This is fine and all but there is one more sinister intention of this kind of packaging. To infuriate the buyer and frustrate him to tears. There is no easy way to open packaging like this outside of using a knife or a firearm of some sorts, depending on how frustrated you really get. 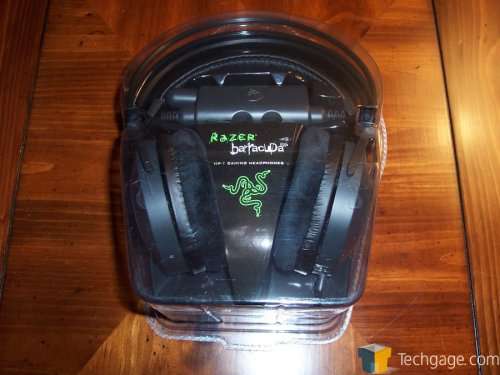 Once opened, and the cut on my thumb from the near indestructible packaging bandaged up, we can now start to play with the HP-1 and see just how well they perform.

Before we get much into the performance of these headphones, I want to point out the specs of the HP-1’s first. These are provided by our friends at Razer and can also be found on their website should you want to check them out for yourselves.

Now that we have that out of the way, let’s look at some of the other features that the HP-1 has to offer.

Razer is promoting the HP-1 along side the AC-1 sound card. The connection cable on the HP-1 is designed to directly hook up with the AC-1 when the card is released to the public. Since we do not have the AC-1 in hand how, I will be using the HP-1 with my Creative Audigy 2 ZS. This should not make a difference but we will only know this for sure when we get in the AC-1 and run a head to head test.