Razerâ€™s products have been a popular choice with PC gamers throughout recent history, and their peripherals seldom fail to impress. Often times when companies try to advertise to the enthusiast market, they over promise and under deliver. The hype with numbers and gimmicks try to sell features that arenâ€™t a necessity. Buzz words like DPI, response times, and low latency tend to steer companies in the wrong direction when they try to appeal to gamers.

These days gamers are looking for a competitive edge, or unfair advantage as Razer calls it. The company plans to deliver something that can satisfy the hardcore market.

The Tarantula is Razerâ€™s first attempt at a gaming keyboard. It does have some similarities to rival products like Logitechâ€™s G15 and Saitekâ€™s Eclipse boards, but the company hopes to offer something transcendent to the competition. Razer hasnâ€™t been silent about their functionality the keyboardâ€™s touting. There are some interesting features offered in this keyboard that weâ€™ve never seen before.

Razer has been known for their sleek looking box designs; it will definitely be hard to miss on a store shelf. It holds a very similar design to the rest of Razerâ€™s box art with the product on a dark background and Razerâ€™s logo in green. 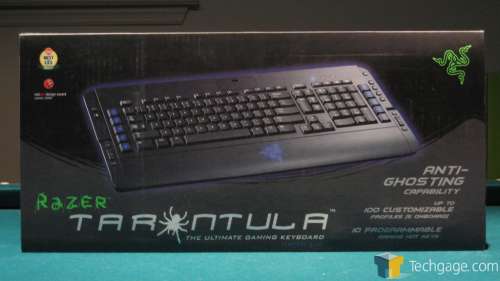 The back of the box lists six key features and includes their location on a diagram. Razer chose to highlight the anti-ghosting feature, 32KB of onboard memory, programmable keys, the Tarantulaâ€™s â€œBattledockâ€, USB ports, earphone and microphone jack, and the gold plated USB connector. 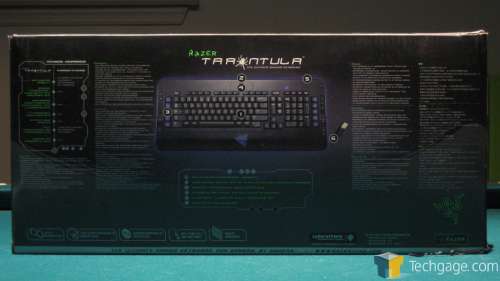 The inside flap focuses on the Tarantulaâ€™s features in further detail and shows a rendering of two Battledock accessories that should be available, the Battlelight (flashlight) and Battleeye (webcam). The interchangeable keys are shown held in plastic, as well as a tool that will help remove the keys. 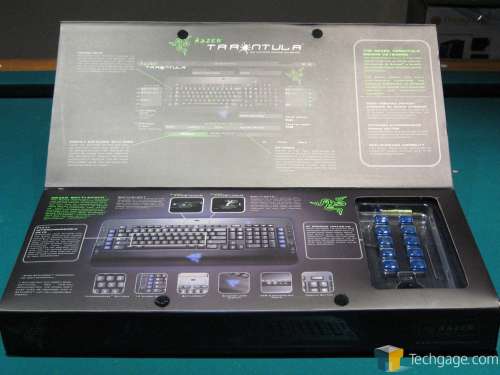 Once the box is opened and the internal packaging is taken out, the extra keys and manual will be waiting for you. 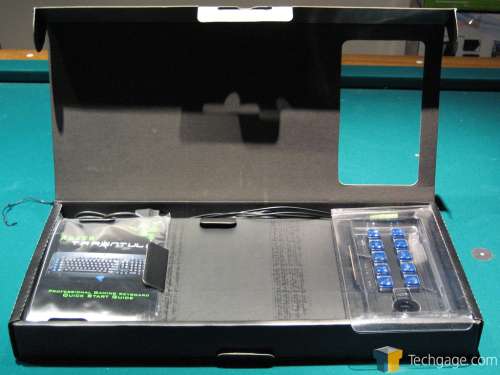 Here we have the keyboard itself, still in its plastic film. 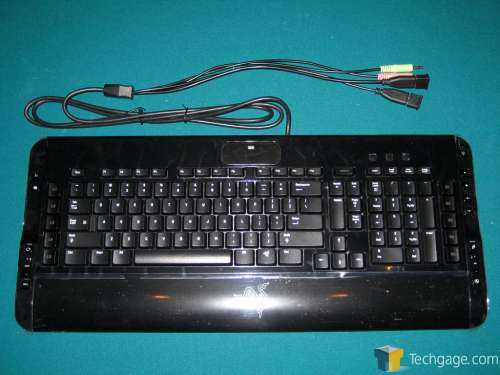 Thereâ€™s no denying the Tarantula is full-featured. In fact, itâ€™s a behemoth. While itâ€™s still not as big as the G15, the keyboard will still take up a good amount of desk space. As you take it out of the box youâ€™re going to notice one thing: it will attract a lot of finger prints. Scratches may even show up if you do so much as leave crumbs on your desk in some cases. 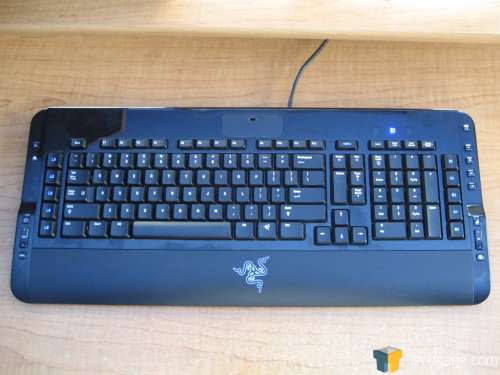 The bottom of the keyboard has Razerâ€™s signature logo. Just like what weâ€™ve seen with the companyâ€™s past products, the logo lights up and pulses blue. Unfortunately, thereâ€™s no way to turn the light off. 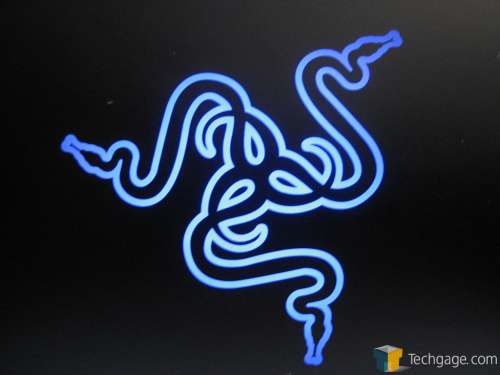 The keyboardâ€™s layout is hardly what you would call standard. Much like the G15, there are extra keys all over the board. The sides of the Tarantula are home to the media and function buttons. Unlike the rest of the keys on the Tarantula, these buttons are small and firm to press and therefore, hard to press accidentally. The top-left side has hibernate and homepage buttons. 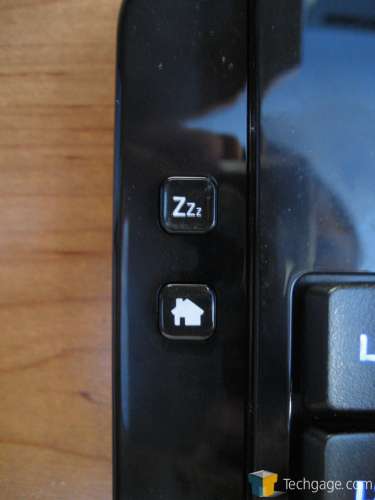 The bottom-left holds buttons designed for manipulating images. From top-to-bottom, the keys can rotate, zoom in and out, and view the image at its native size. These buttons can work in the Windows Picture and Fax Viewer or an image editor, but not both at one time. 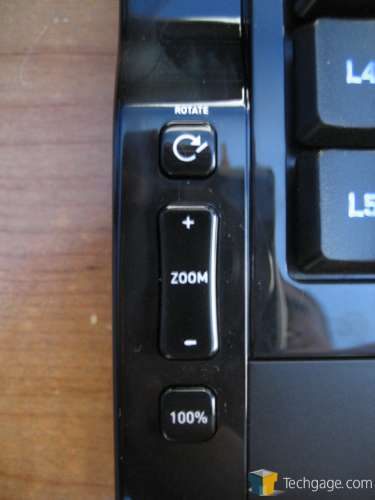 The buttons on the right side are specific for media. The top group can control playing media and launch whatever media player is set on default. The bottom section can shuffle songs and turn the volume up or down or mute it. If you try to use the buttons in another program weird things often happen. For example, in Microsoft Word the rotate button would bring up the insert hyperlink window, the zoom rocker would insert â€œ+â€ and â€œ-â€œ characters, and the full size button highlighted all of the text in the document. The other downside to the media keys is the fact that they only work with Windows Media Player, iTunes, Real Player, and Winamp. 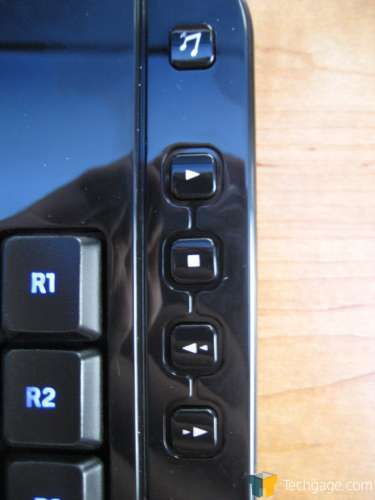 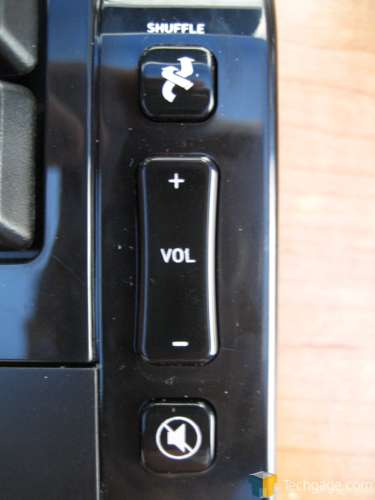 There are keys on the side designed for macros, labeled L1-5 for the left side, and R1-5 for the right. These keys can only be set and used with the Tarantulaâ€™s configuration tool. 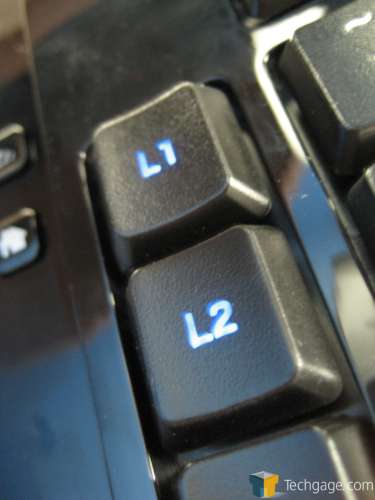 The Esc and functions keys on the top (F1 â€“ F12) are smaller than they would usually be, which I honestly found to be odd. Razer certainly had enough space to work with to make them larger. 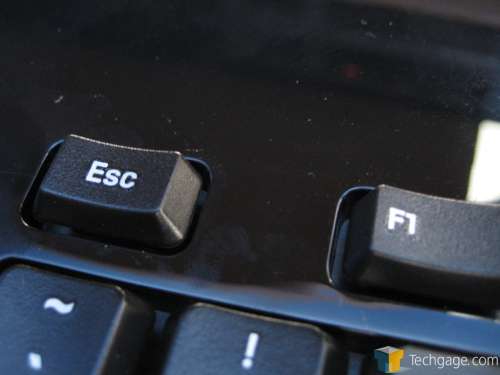 The profile button on the top row can switch between macros set up for the keyboard. 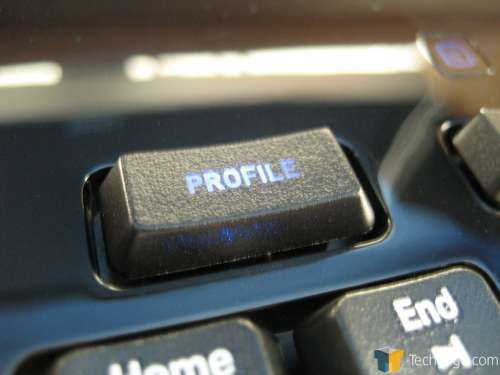 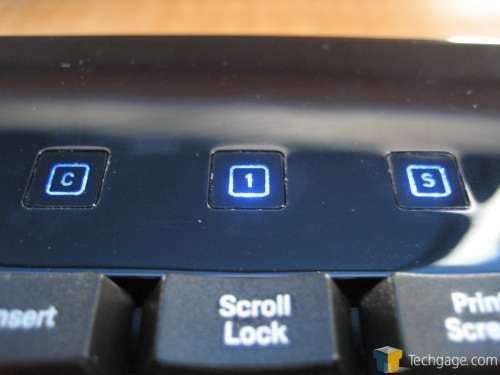 The under side of the Tarantula has what you would expect from any keyboard, retractable legs. Theyâ€™re a testament to typists everywhere. Letâ€™s move on to something more interesting. 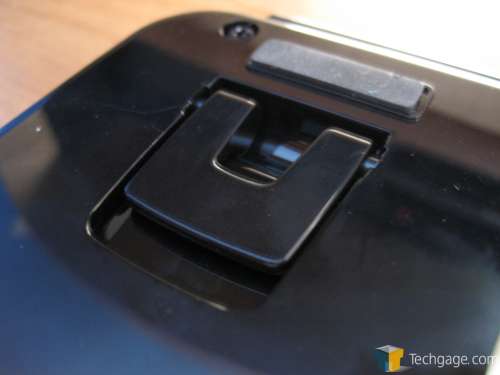 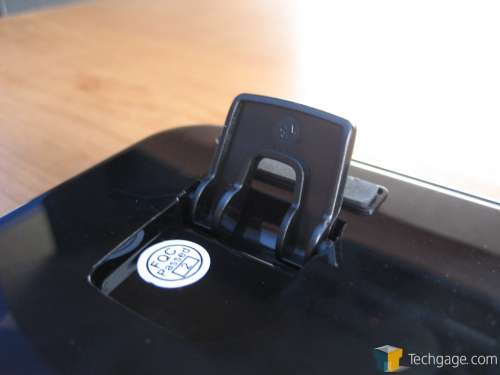 The back of the keyboard has two USB 1.1 ports as well as a headphone and microphone jack. The extra USB cable that dangles off the end of the Tarantulaâ€™s cable is only necessary if a device being used with the hub needs more power. 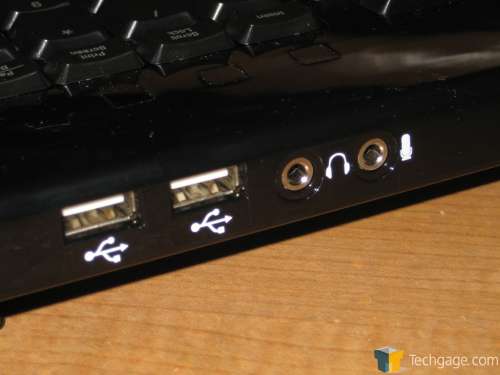 That’s take a look at the software and then our final thoughts.