Above all else, this is a keyboard made for gamers. If thereâ€™s anyone Razer should be worried about, itâ€™s Logitech. Since its release, the Tarantula has often been directly compared to the G15, and rightly so. It shares many of the same features including illuminated keys, macros, and profiles that can be used for separate games.

In a way, Razerâ€™s drivers are much like Logitechâ€™s SetPoint: you either love them or hate them. The nice thing about their drivers is their unobtrusiveness. They will never popup nagging about updates or take up an ungodly amount of memory. At most, an icon appears in the system tray after the installation, but that can be easily disabled.

I do have a few minor complaints with the software and its interface. The drivers with Razerâ€™s products are all made from bitmaps, and therefore, donâ€™t blend in with the rest of the Windows environment. There is also no way to minimize the window, and the program did freeze twice while testing it.

Setting up macros with the keyboard is a simple process. Once you have the program loaded, a click on one of the macro keys will bring up the corresponding configuration window. Typing will set the keys to the macro, although only eight buttons can be used at once. The Tarantula will even save up to five profiles on its internal 32kb of memory, which is a nice feature.

One interesting feature that the Tarantula offers is the customizable keys. Razer includes ten keys which mostly happen to be relevant to first-person shooters). The tool that is included with the keyboard basically goes in the gaps of the key you want to replace, and pops it out. 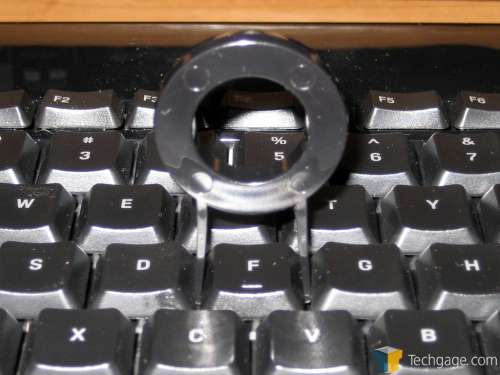 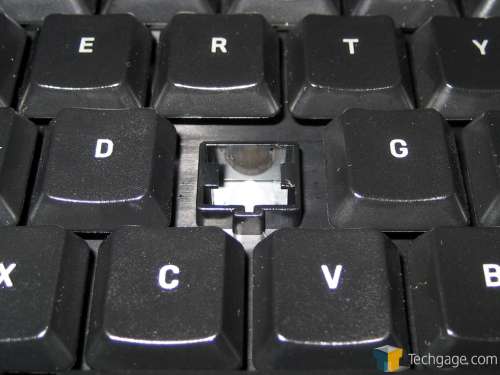 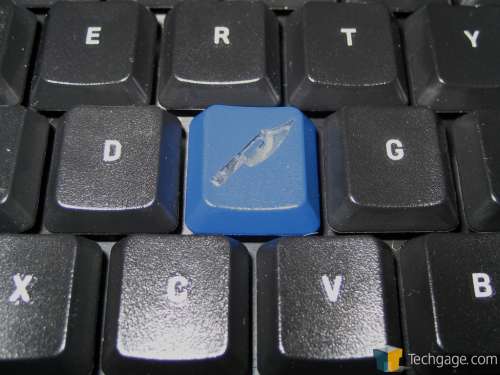 Even though itâ€™s a useful feature on paper, many may consider it unnecessary because of the lack of illumination. I would have much rather opted to have every key light up with the option of turning it on or off with a dedicated button or the drivers.

Typing is a touchy subject because everyone has different tastes. My experience using the Tarantula would have to be disappointing. It was too hard to get used to the size of the keyboard coming from the Saitek Eclipse and other boards. At first, the macro buttons would get in my way when I tried pressing the Ctrl key (and occasionally still do), but thatâ€™s something that (mostly) went away after getting used to it. My real complaint with using the keyboard for typing is the arm wrest. I would have personally wished to have the ability to remove it, especially since typing never felt quite â€œrightâ€ with the legs extended or recessed. The arm wrest isnâ€™t flush with the surface, so it would get in my way every once in a while.

Having a two-row mid section made things feel cramped with the delete and arrow keys, but this is more of a personal issue, and more keyboards are starting to adopt this new layout.

Gaming however, is where most of my major complaints end. The keys felt responsive and had great tactile response, but pressing any of the keys on the top row made the keyboard feel cumbersome. Even though it felt decent, Razerâ€™s statement about having â€œhyper responsiveâ€ is probably an exaggeration. Even if youâ€™re a serious gamer, youâ€™re not missing anything here. However, the antighosting feature is a nice addition that hardcore gamers will surely appreciate.

The Battledock is another interesting idea, but there have been no accessories that have taken advantage of it. At this point in time, itâ€™s not clear just how much support Razer plans to put into the platform, so for now itâ€™s just empty space.

That being said, the Tarantula is still a decent keyboard with a lot of potential, and one of the few that gamers really have a choice from if they want extra functionality like macros. I still donâ€™t think itâ€™s worth its current MSRP, but prices will go down in time, and it might be worth checking out at your local brick and motor if the design suits you. Even with its strengths, there are other options available If it evolves with Razerâ€™s expectations, it might be worth picking up in the future.