Razer began its gambit for domination of the lucrative gaming peripheral market in the late 1990s, building a line of innovative mice and keyboards which blended groundbreaking performance features with incredible styling and tactile appeal.

As time has passed, Razer has branched into other product categories targeted especially at gamers, including high-quality headphones and a companion 3D positional-audio sound card, which combined to form the Barracuda gaming audio system. As with their previous efforts, the Barracuda system met broad acclaim from the gaming press, and proved that Razer could be a formidable market player in any product category, not only input devices but in audio hardware as well.

The Mako system is an eye-catcher, with its combination of glossy curvaceous and mirror-finished flat surfaces, and the apertures through which the speaker drivers fire into the room, which rim the bottom edge of each satellite speaker. The down-firing subwoofer is endowed with a broader aperture, but matches the satellite speakers in its bizarre styling, which is evocative of grainy UFO home videos. 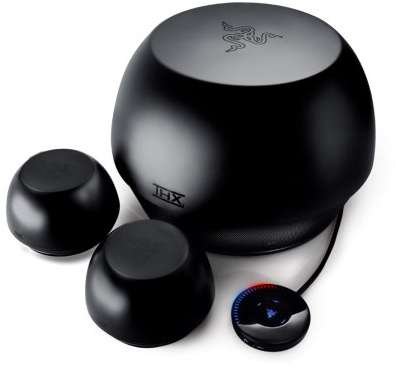 The otherworldly styling of the Mako satellite speakers is made possible by two technologies developed by THX, Ltd., which develops performance standards for audio-visual systems in the theater, the home, the car, and for the PC. THX is more than just the furious blast of vacuum-cleaner noise at the beginning of a movie – their raison d’etre is to advance the state of the art in audio systems.

If an A/V system component is capable of meeting the criteria for THX Certification in its product category, consumers can rest assured that the product they’re considering is able to deliver the best audio/visual performance that can be expected from a product in its category.

THX Certification is a distinction that only the finest audio-visual gear can receive. THX functions as an independent laboratory in this sense, evaluating products submitted to it for certification, and producing thick reports documenting multifarious facets of the system’s performance, from frequency response to impulse response to total harmonic distortion. THX then bestows its coveted certification mark on the product, or offers its own suggestions for improving the product so that it can meet THX performance standards. 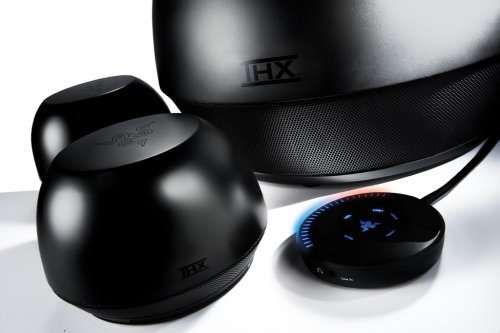 More recently, THX has begun to develop audio technologies to advance the state of the art, placing it in a similar category as two other companies, SRS Labs and Dolby Laboratories, though not all of THX’s technologies are DSP-based. Two of these new, patented THX technologies are present in the Razer Mako system: Ground Plane technology, and Slot Speaker technology, which we’ll discuss from a technical standpoint later on.

Does the Razer/THX Mako’s bizarre design and compliment of technologies add up to spectacular sound, as we’d expect from a company like Razer (or THX, for that matter)? Techgage’s own Rob and Greg were impressed when they first heard the Mako 2.1 at CES 2007. However, nearly a year and a half after their CES introduction, after repeated delays in the Mako’s launch, and with one additional potential competitor already on shelves, we’re only just now seeing a review sample. Were these strange-looking newcomers worth the long wait?