The Razer/THX Mako 2.1 speaker system represents a departure from your typical PC speaker system, and from typical ‘box’ loudspeakers in general, with THX, Ltd. bringing their considerable engineering might and audio experience to bear on every stage of their conception, development, and tuning. What Razer and THX ended up with, however, speaks for itself with its fusion of Razer’s striking design and THX-certified audio performance. (No pun intended.) Let’s look at how the various advanced audio technologies come together in the Mako speakers to make them a serious contender for the top spot on audio-loving PC enthusiasts’ lists. 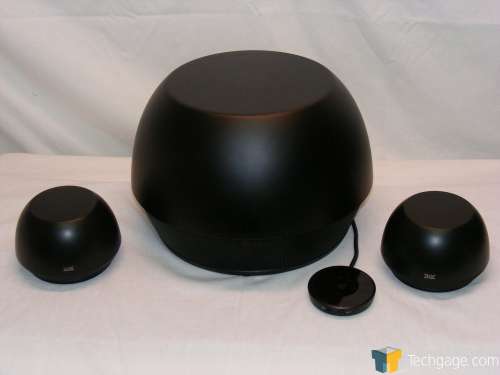 The first thing the Razer Mako speakers confront you with is their styling, which I’ve already described as ‘otherworldly.’ Their physical forms resemble upturned Japanese rice bowls, and a large overturned mixing bowl. They’re surprisingly compact, but weighty – there’s no danger of these pods sliding around on your desktop or floor. While the original Mako speakers displayed at the 2007 CES featured prominent blue-LED illumination in the top of the satellite speakers, that design feature was (thankfully) dropped in favor of a much more subtle (and far less garish) silkscreened Razer logo on top of each speaker. No, Razer, you do not need to put a blue LED in everything. 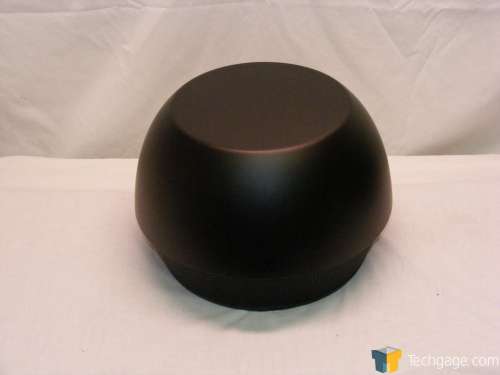 Bass – we all crave it, even the most uptight audiophiles among us. And if the Razer/THX Mako system falls flat in the bass department, most ordinary listeners will likely dismiss the system out-of-hand. Making sure that doesn’t happen is one of the beefiest subwoofers I’ve seen in a PC audio system. Though its enclosure is plastic, this sub is heavy, suggestive of a monstrous magnet on the woofer driver (though the review sample had to be returned, so I didn’t take the liberty of disassembly.) Amplification circuitry for all speakers is built into the bottom of the sub, instead of being located inside the woofer’s air chamber. 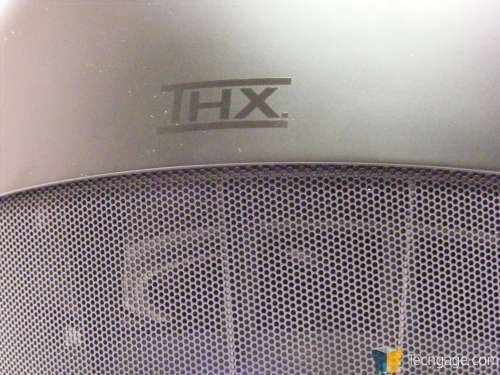 The Razer Mako’s subwoofer is anchored by a beastly bass driver with a polypropylene cone, a 3/4″-thick rubber half-roll surround, and a sturdy stamped frame. It’s cinched tightly into a sealed pressure vessel, which is uncommon in PC speaker systems. This sub is capable of moving quite a bit of air, mechanically speaking. In the past, bass-reflex subwoofers have been the norm, using a mass of air suspended in the port and bouncing on the internal air volume of the box to augment low-frequency output. However, if there’s information in the audio signal that’s deeper than the enclosure’s tuning frequency, the woofer will sometimes unload and ‘bottom out’, as its voice coil bumps up against the back of the magnetic structure. 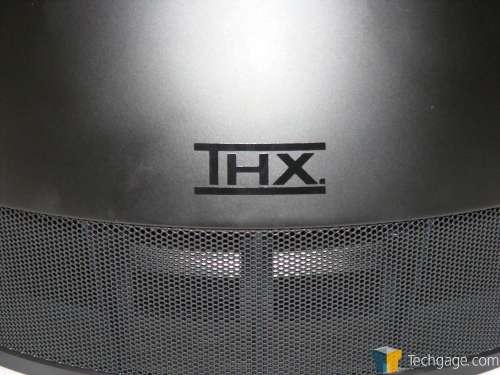 The Razer Mako’s subwoofer takes a different approach, using a small sealed enclosure and DSP processing to force the woofer driver to provide deep bass extension from the small enclosure by boosting the amplifier drive level at a rate that compensates for the sealed box’s natural ‘rolloff’ at the low end of its response curve. This design won’t run into overexcursion issues at low frequencies, but you won’t be left wondering where the beef is. Check out the testing section to see what I thought of this sub. Go on, peek ahead; I won’t tell anyone. 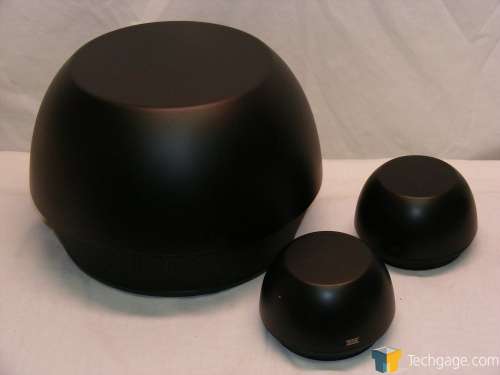 The satellite speakers of the Mako system are where the THX-developed Ground Plane and Slot Speaker technologies come into play. The satellite speakers look like overturned bowls, with annular openings around their bases for the “midbass drivers” (which reproduce both midrange and upper bass information) and a slimmer opening on the front of the satellite (beneath the THX logo) which hides the tweeter. Also inside each speaker, mounted on the bottom of the midrange’s “ground plane” waveguide, is a passive crossover network that divides midrange and lower frequencies to the 3″ poly-cone, ceramic-magnet midbass driver, and treble frequencies to the “slot speaker” tweeter. 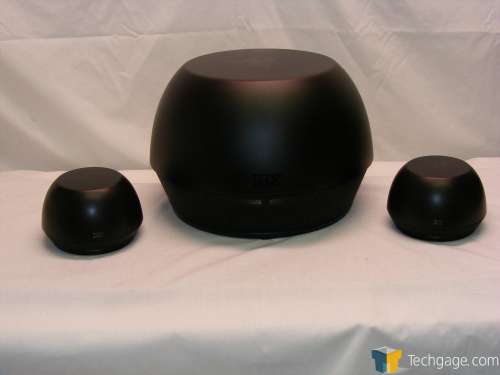 The purpose of the Razer Mako’s THX-developed “Ground Plane” technology is to eliminate a phenomenon called “desk bounce”. Speaker drivers radiate directionally at some frequencies, but some sound still radiates at angles up to 45 degrees off-axis and beyond, particularly in the case of ‘dome’ tweeters, which employ a rounded diaphragm that’s extremely rigid, and also achieves broad spherical dispersion by virtue of its small size. When a loudspeaker with a high level of off-axis radiation is placed just above a flat surface such as a desk, this extraneous sound radiation can bounce off the desk’s surface and be reflected toward the listener’s ears, smearing detail because of the multiple arrivals of direct and reflected sound.

Ground Plane technology causes all the acoustic energy to radiate from the plane of the desk itself, so it can’t be reflected off the desk. In order to accomplish this, it’s necessary to bring the tweeter down to the desk’s level as well, so the THX engineering crew devised “Slot Speaker” technology to load the tweeter to a slot-shaped waveguide whose height is still smaller than the wavelengths of treble frequencies. This prevents treble energy from being reflected inside the waveguide itself, which would impair detail. Instead, as the treble wavefronts reach the end of the waveguide, they diffract off the upper edge of the waveguide and radiate upward toward the listener’s ears.

The tweeter driver itself is placed slightly forward of the midrange driver’s voice coil, and the slot speaker aperture only radiates through about 120 degrees horizontally, so while it’s not a true omnidirectional treble radiator, the Mako speakers still achieve exceptionally broad dispersion, and produce an incredibly wide ‘sweet spot’. More on this effect, and the combined effect of Ground Plane and Slot Speaker technologies later in the ‘listening testing’ section of the review. 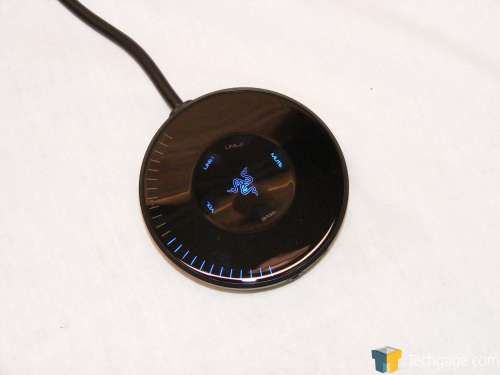 Razer’s design prowess is also evident on the Mako system’s control pod. There are no mechanical buttons or knobs here; instead, every bit of user feedback is accomplished through touch-sensitive membranes, much like on a touch-screen monitor. The power status of the system is displayed through the state of the blue LED underneath the Razer logo. The LED glows steadily at full brightness when the system is active, but touching the logo will place the system into standby mode, indicated by a gently throbbing LED. Source selection and one-touch muting is also accomplished similarly by other touch-sensitive regions near the center of the control pod.

A series of blue LEDs around the outside edge of the control pod indicate system volume. At saner volumes, the LEDs are blue, but as levels rise into the realm of the extreme, or even dangerous to your hearing, the LEDs turn red. This is an important visual cue, because the system incorporates automatic limiters that keep the sound clean and unstrained, so you might not realize that you’ve pushed volumes to an unsafe level if you rely on the presence of distortion to clue you in that the sound is ‘loud enough’. 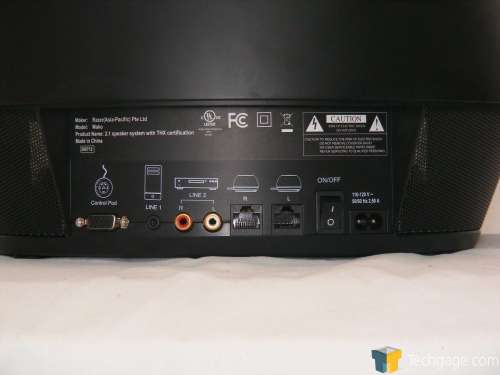 The input panel of the Razer Mako system is clearly labeled, and features both text labels and pictorial guides to make connections easy. From the images, you can tell exactly what’s to be connected to each jack. The speakers connect using flat cables with RJ-45 terminations, though only two of the pins on the RJ-45 connector are active, and the control pod connects using a VGA-style connector. There’s also a master power switch for the system, which really and truly powers down the system. If you can’t tell why the system is silent, and there’s no illumination on the control pod, check here first.

One thing that’s puzzling about a speaker system that claims to advance the state of the art in sound is this: The Razer Mako 2.1 system only receives input signals in two-channel analog stereo. By contrast, the Logitech Z Cinema system reviewed last month used a completely digital signal chain all the way to the amplifiers via a single USB cable. This USB connection was also capable of handling control signals for the Z Cinema system, which operated as though it were simply an external USB sound card – changing your Windows Volume Control settings on the PC’s monitor caused the Z Cinema’s own display to register the change.

So why are we stuck with analog signal inputs on this more expensive system? For one thing, the analog input of the Mako system can accommodate a broader array of potential sources – everything from plasma televisions to portable music players, a capability that was missed with the Z Cinema system. Also, we aren’t left to wonder about the quality of the digital-to-analog conversion in the speaker system – with the Mako’s analog input, we can choose a high-end sound card, and know that we’ve got high quality upstream components feeding the speakers.

The included cable with the Razer Mako system is flimsy-looking, though, so if you’re really concerned about the effect that signal cabling could be having on your audio experience, you might do well to pick a better-quality cable, or use high-quality RCA-style interconnects to bring signals into the Mako’s Line2 input. I’m not a believer in $8000 audio cables, but for long signal runs, I’ve found that better cables can make a slight difference in signal transmission. Unfortunately, speaker systems with optical or coaxial digital input are still nowhere to be found in the PC audio market.

Now that we’ve given the Razer Mako 2.1 system a thorough once-over, let’s take a look at how it performs sonically, with some focused listening tests.