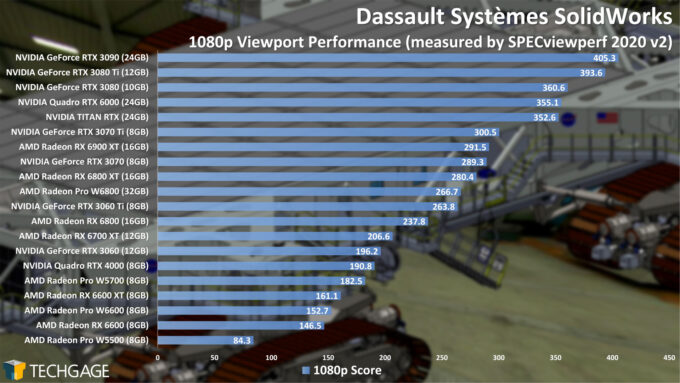 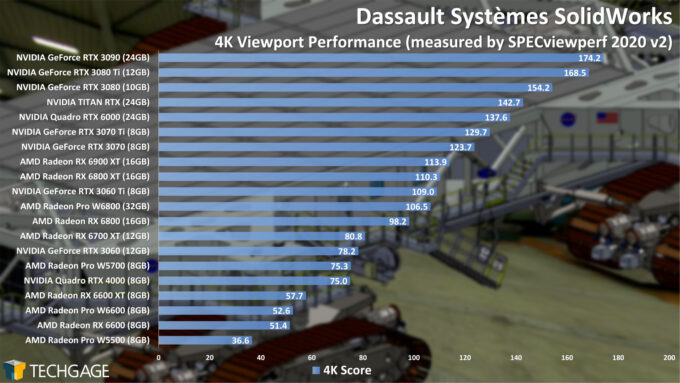 Some CAD suites perform a lot better on workstation graphics cards than their gaming counterparts, but SolidWorks isn’t one of them. That said, when using such a high-end suite like this, we feel compelled to suggest going with a workstation card even if performance lags a bit behind those gaming cards. The reality is, companies like Dassault focus their entire support efforts on workstation GPUs, and likewise, AMD and NVIDIA have special tuning in their respective drivers for things beyond the viewport.

If on a budget, you’re not going to be out-of-luck with a gaming card, but it’s worth highlighting the fact that AMD’s and NVIDIA’s workstation GPUs are required for SolidWork’s RealView mode, so you will need to investigate how important of a feature that would be in your workflow.

All of that said, results like these highlight the fact that AMD can fill many gaps in its Radeon Pro lineup. On the gaming side of things, there are currently seven RDNA2-based cards, while there are only two in the Radeon Pro series. Hopefully we’ll see more models added before long.

In any event, considering that the Quadro RTX 6000 itself places ahead of AMD’s Radeon Pro W6800 here, we can only imagine that NVIDIA’s latest-gen cards would pull even further ahead. It’s hard to beat the 32GB frame buffer of the W6800, however. 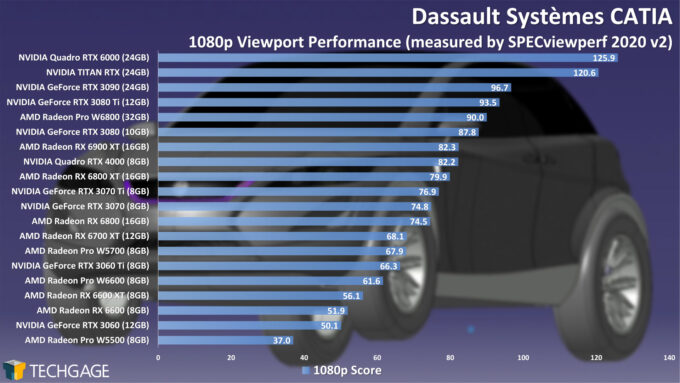 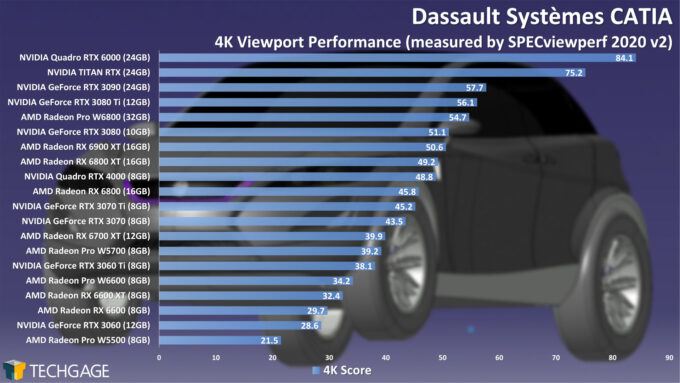 As we covered above with SolidWorks, we tend to suggest workstation GPUs for any Dassault product, and that includes CATIA. You can get by with a gaming card, but on the support front, you need to realize all parties involved are focusing entirely on workstation GPUs for their tuning and optimal support. While workstation GPUs cost more than their gaming counterparts, it’s a fraction of what it costs for a license for one of these tools.

What’s impressive to us here is just how much further ahead both the TITAN RTX and Quadro RTX 6000 are from the other GPUs, which is another thing that hints that current-gen Ampere workstation GPUs could appear even higher up. On the Radeon Pro front, the W6800 delivers a strong gain over the gaming-oriented RX 6800 that sports similar hardware (minus the mega amount of memory). 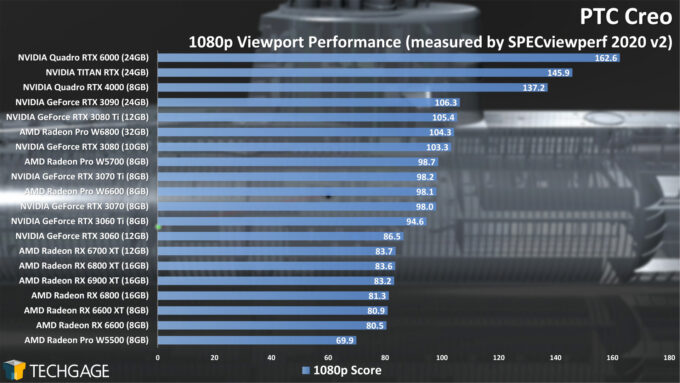 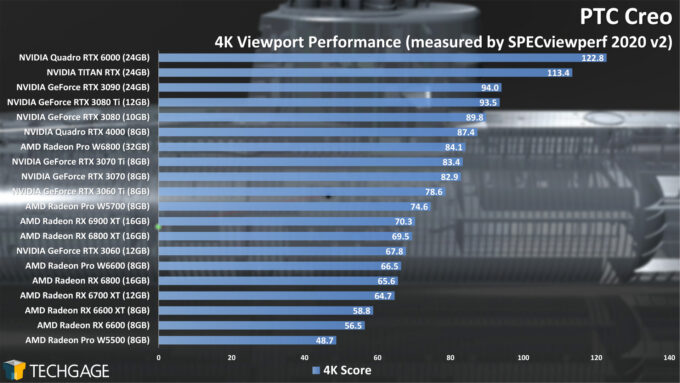 NVIDIA’s been a bit of a force to be reckoned with so far in these viewport results, and that carries on through to PTC’s Creo. Both last-gen Quadros in our possession soar to the top, sitting alongside the TITAN RTX, a card that effectively places itself in between the gaming and workstation series in terms of optimizations.

Yet again, we see the current-gen Radeon Pros vastly surpass the performance of their gaming equivalents, highlighting what those extra driver optimizations can manage. 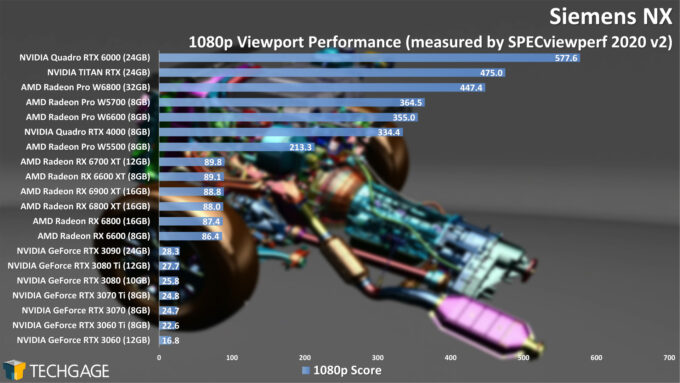 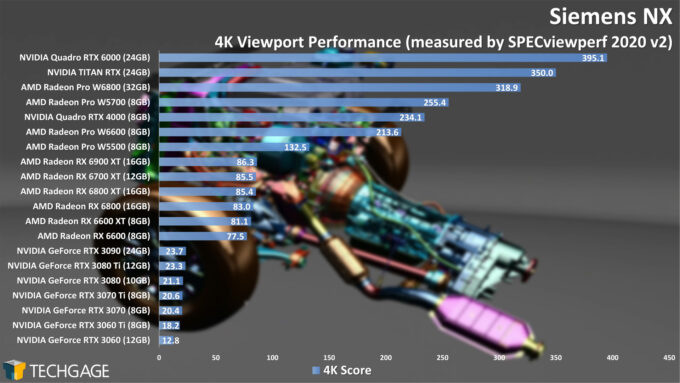 If you’re trying to decide between a gaming or workstation GPU for Siemens NX, the decision has effectively been made for you. Gaming GPUs may fare pretty well in solutions from Dassault, but in SNX’s case, the gaming cards are almost actively worked against. AMD’s newest Radeon Pros perform great here, with the W6600 matching the Quadro RTX 4000 overall. We’re not sure the same could be said if it was the current-gen A4000 we had in here. 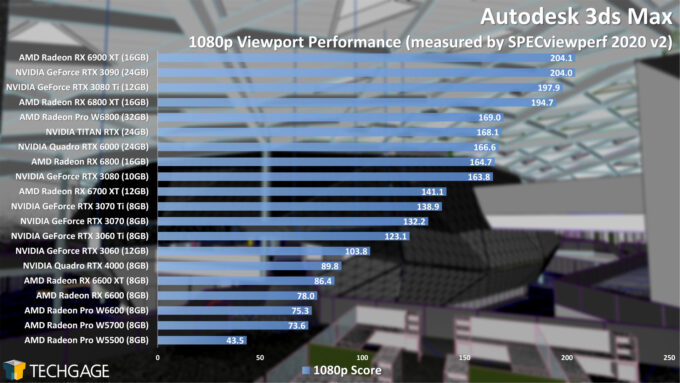 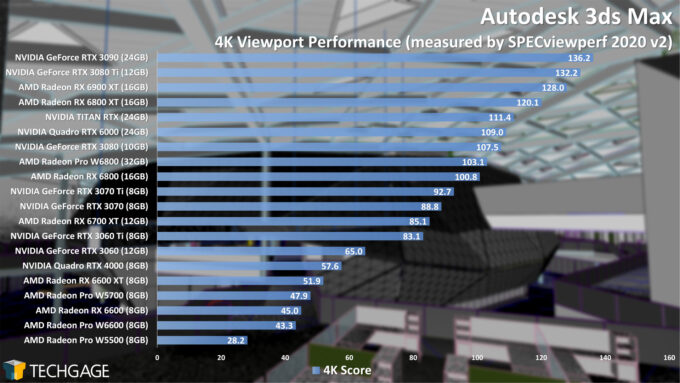 Compared to most of the viewport tests here, 3ds Max doesn’t care if you use it with a gaming or workstation GPU, with Autodesk even going as far as to list gaming SKUs in its support pages. That said, both AMD and NVIDIA will add extra focus on applications like 3ds Max (and Maya) in its drivers, and if you want ECC, you’re not going to get it on a gaming GPU (or even the W6600, unfortunately.)

Overall, AMD’s new Radeon Pros perform similarly to their gaming equivalents. It goes without saying, though, that most of these GPUs are going to deliver apt performance here; the biggest differences will be seen with rendering performance, and not to mention the amount of memory on tap. 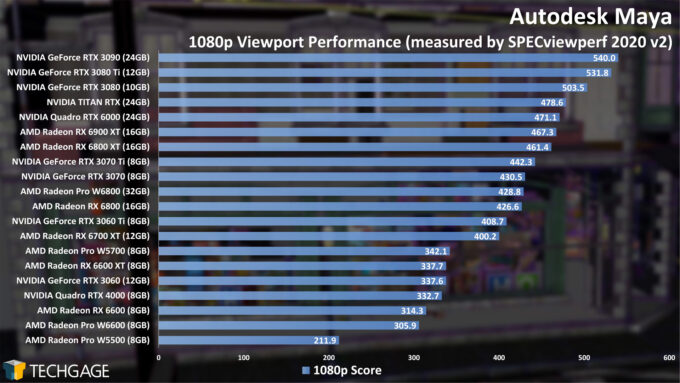 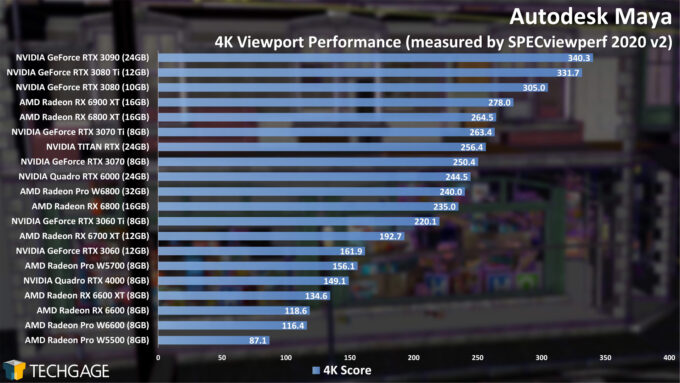 With Maya, you could mirror many of the sentiments that was said about about 3ds Max. Gaming cards are treated like normal silicon citizens here, with most of the GPUs tested here proving more than apt for the job at hand. The outlier really seems to be the W5500 from the last-gen Radeon Pro series – it sits quite a bit further back in the pack than we would have expected.

Naturally, viewport performance is just one aspect that’s important to consider with any GPU. While an 8GB model might slay SPECviewperf’s test, it doesn’t necessarily mean that the limited memory won’t act as a roadblock. That’s one reason it will be hard to beat a GPU like the 32GB Radeon Pro W6800, or even NVIDIA’s GPUs that sport 24GB of memory. It’s nice to have enough VRAM that you know you won’t be held back. 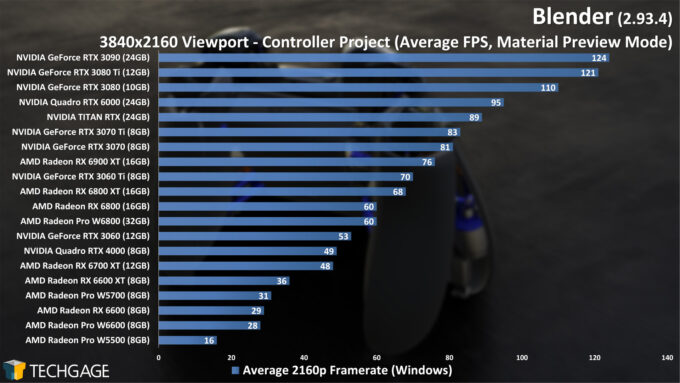 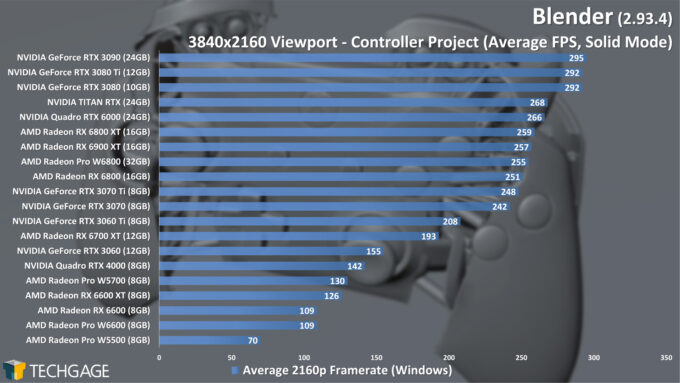 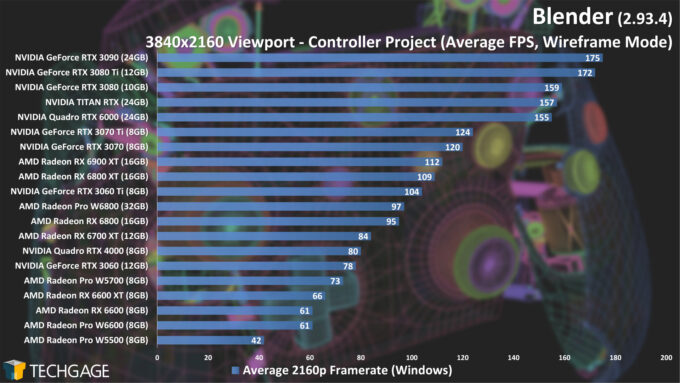 Blender is another design suite that doesn’t favor workstation GPUs over gaming, but as we’ve seen in the past, NVIDIA tends to have a bit of an edge here. Nothing about that changes in these viewport results, with the GeForces and Quadros eking slightly ahead of the Radeon competition. That said, most of these GPUs can hit 60 FPS at 4K with this simpler Controller project, so your most important decision will likely hinge on the amount of memory available. 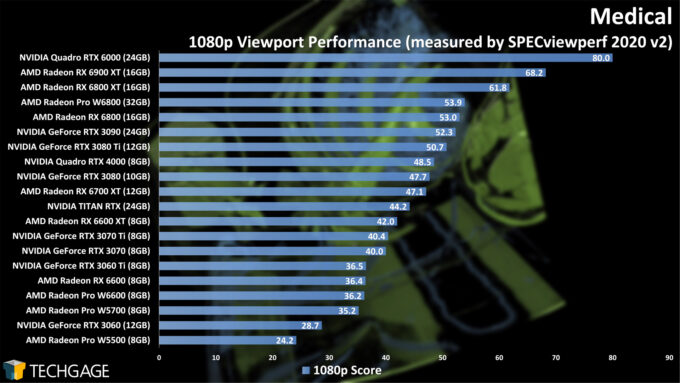 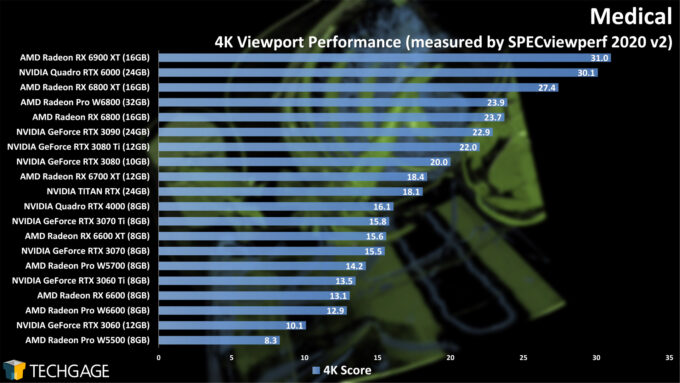 The Medical viewport test, conducted with the help of SPECviewperf, highlights some interesting results between resolutions here. NVIDIA’s Quadro RTX 6000 pegs to the top of the 1080p test, but comes back down to parity with the second-place GPU at 4K. We’re really not sure what exactly propels that Quadro to the top at 1080p, or why it doesn’t exhibit the same lead at 4K.

Nonetheless, one thing that really stands out here is that AMD’s current-gen Radeons naturally love this workloads. It’s impressive to see just how close the mid-range RX 6600 XT gaming GPU manages to keep up to NVIDIA’s last-gen TITAN RTX, or even current-gen RTX 3070 Ti. For both AMD and NVIDIA, workstation GPUs exhibit big boosts here when compared to the gaming equivalents. 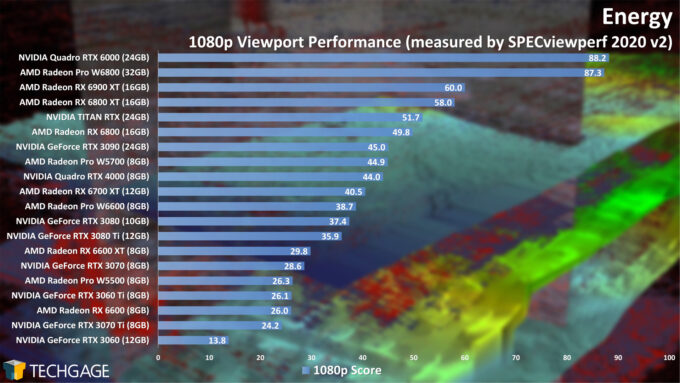 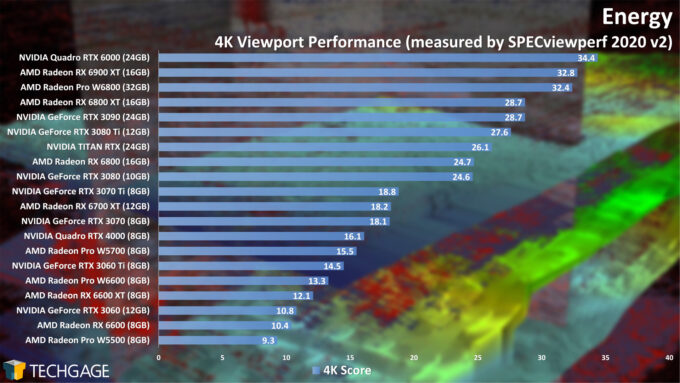 To wrap up our viewport tests, we take a look at another serious test: energy. As we saw with the Medical test above, both AMD’s and NVIDIA’s workstation GPUs are clearly optimized for this energy workload, with AMD’s (current) top-end Radeon Pro W6800 pushing to the top in both resolutions, sitting just behind the Quadro RTX 6000.