Resident Evil 6 – Too Much Action for Horror?

The Resident Evil series has been at the forefront of horror games since its first game on the PlayStation in 1996. Does this latest Resident Evil maintain the same level of creativity and bouts of genuine horror, or does it prove that the game has become a follower rather than a leader?

Resident Evil 6 starts off by plopping you into a training level where you play as Leon, one of the 8 playable characters. Once you have completed your training you are taken to the menu of the game where you can then choose the campaign you wish to play; these can either be played solo or through co-op. The individual campaigns are interconnected, and each one will take you about 5 to 6 hours on average to complete.

Each story featured in the game is intertwined with the others in one way or another, which gives the collaboration between the multiple characters and the world a greater sense of depth and purpose. The only issue that I had with this was that when the characters were collaborating together on certain events that required you to take down a boss, the final blow shifted to the characters you were playing, and that scenario made itself more important than the previous one. That being said, all of the characters still felt important and integral to one another and to the overall story, which obviously is not an easy thing to do. 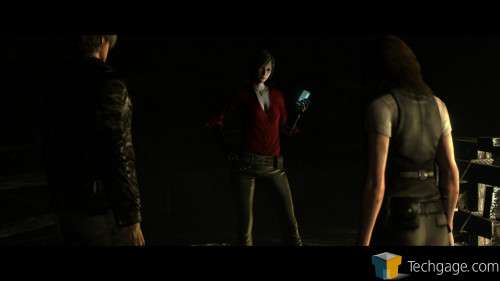 RE6 introduces a new gameplay mechanic called skills; the skills are separated both in the single player, co-op and the multiplayer mercenaries mode. There are a few skills that can be used across all game types, but the majority are segregated. The points however are universal; this means if you like mercenaries mode, those points will carry over to single player and vice-versa. The limit of usable skills is three at a time, but the game gives you the option to change these up to 8 configurable settings. The downside is that you have to set this up before you play, or in between levels during single player and co-op. 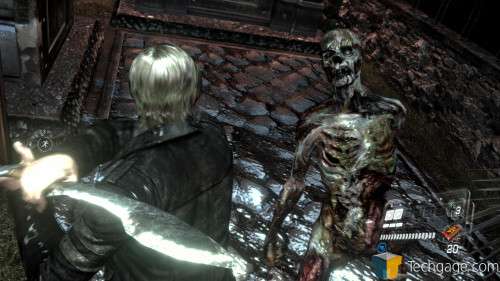 The game’s characters are further individualized by the weapons they use and the HUD used in each campaign. The reason this is so drastic is because the weapons and HUD fit the personality types of each character; as an example, you wouldn’t expect Leon to carry a crossbow the same way that Ada does or Pier to use a shotgun when he is proficient with a sniper rifle. The skill system clearly gives the players a choice to customize their characters, in all game modes, for who they are playing and customize them for the player’s unique play style. This makes for a very rewarding system when you consider the flexibility of it all. 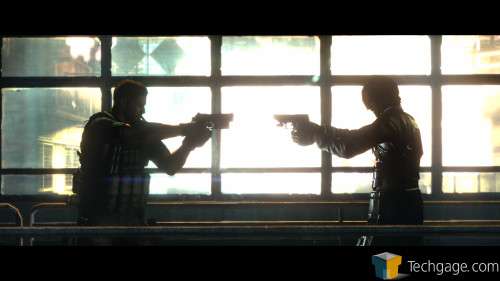 Resident Evil 6 unfortunately doesn’t have many moments in it that were truly terrifying. The game is filled with suspense, but it’s never truly terrifying. The first two Resident Evil games had moments where you were truly scared going through the game, but that was achieved through fixed camera angles and very linear gameplay. Now that this is being achieved through intelligent storytelling, it’s very hard to empathize with the characters when they are immensely self-confident and have the ability to come out of the most ludicrous death-defying scenarios unscathed. This is further compounded by the fact the same boss comes back over and over and over. Much of the fear is lost. 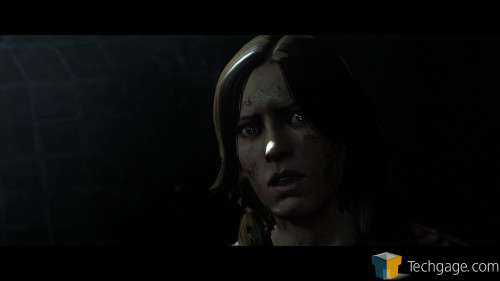 This disconnect comes from low believability; over-the-top boss battles and the character’s confidence in the game, which then carries over to the player, who are now confident themselves. When something comes up that should be a terrifying moment, it is now transformed into something that is common-place. Thus when these things are put together, it’s hard to see Resident Evil 6 as a true horror game; it ends up being an action-packed Quentin Tarantino movie with the Resident Evil theme.  This certainly isn’t the worst story in the Resident Evil series, but it’s certainly not the pinnacle of what the series used to be. 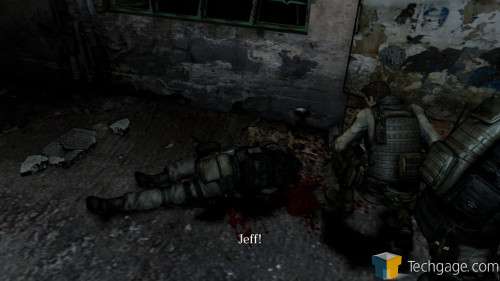 I mentioned before that there is co-op and solo play; the difference between playing solo and co-op delivers a difference of night and day. Not only is the AI less supportive than a regular person, but when playing with your partner, many of the easy mistakes of a Quick Time Event (QTE) will be even more frustrating than playing solo. The reason for this is because the QTEs can be unforgiving when you do not know what’s ahead, and I hate memorizing something to get past it. The QTE problems are 2nd only to the camera angles. These fixed angles can be very difficult for players on the PC with a keyboard and mouse, maintaining control of their avatar in a very tight walkway. 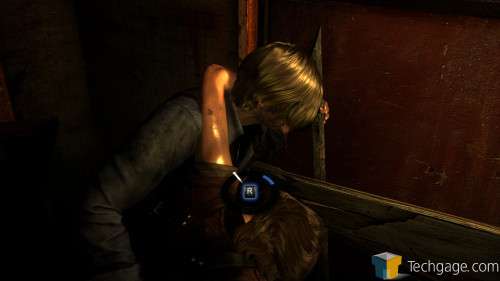 This problem is further compounded when there is a collision between the two player; this can make certain segments of the game, particularly in Chris’ campaign, very difficult, and take a very long time to finish. During the review, my co-op partner and I spent 2 hours on one corridor because the PC controls were not as well-tuned as they were for a gamepad’s analog stick. Despite these co-op problems, the connectivity of the game was very stable. There wasn’t a situation at any point in the game where we had a sync issue or difficulty joining a game. 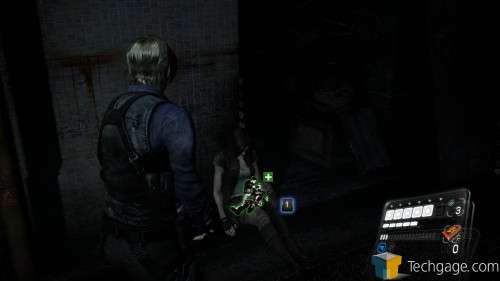 The sound of Resident Evil 6 does what it needs to very well, and the voice-acting, even if a little over-the-top at times, does an excellent job to bring these characters to life.

The biggest issue that I ran into was with the Voice Over IP (VOIP) options in the game or rather, no options at all. The reason this is a problem is because the game will use your default voice capture device but you have no way to mute it, turn it down, link it to a button or just disable it entirely. While playing co-op you have the option to let others join in; in one instance, a person joined and we had to listen to 30 minutes of their significant other singing to their child. Now, this wouldn’t be so bad if we could mute the players that joined our game, but there are no options for this. Thus this forced us to close our game to other people wanting to join, taking away a gameplay feature. This also forced us to take extreme measures with our soundcards by plugging in something to our line-in and setting that as our default input device, and then using a third party VOIP program. This is an unconscionable feature to miss, especially for a multiplayer-centered game like this one is. 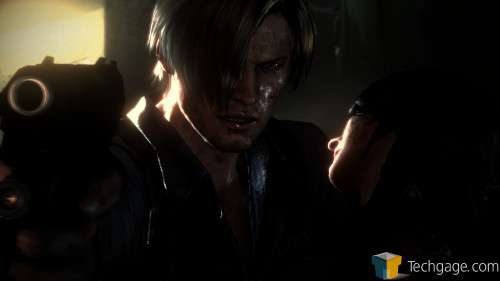 The graphics of Resident Evil 6 on the PC is certainly not mediocre and are slightly above average when you can max them out, however, many of the lighting effects were flickering on shiny objects in the world on my PC. I suspect this had to do with the fact I am running SLI on my dual 580s for my multi-monitor setup, when my co-op partner who is also running multi-monitor, had no such issues on his single 670 GTX. Unfortunately, multi-monitor is not properly supported with this game. There is a third-party fix, but it was not available during the course of my review.  A feature that is seldom seen on the PC is the option for split screen; this will undoubtedly prove useful for those running Steam’s Big Picture mode with multiple gamepads. 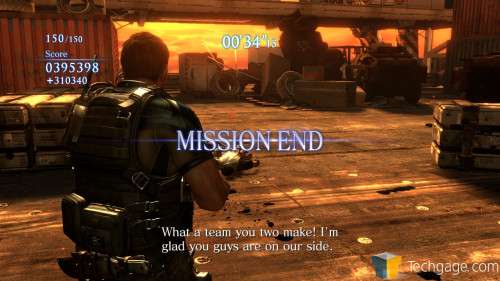 In the end, Resident Evil 6 tries many new things, especially with gameplay, however, it still fails to capture what made this franchise great; the horror. I will certainly say that I felt I got my money’s worth and that the game is worth playing, but I only recommend it to those who either won’t ridicule the absurdities in the story, especially the action parts, or just laugh them away into obscurity and enjoy the rest.